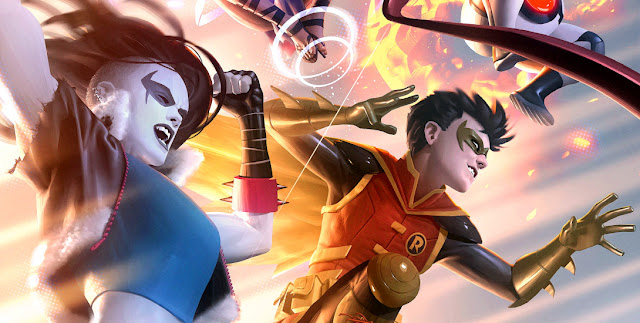 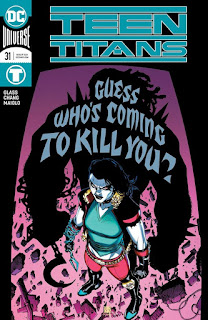 “Daddy Issues” – Part One. Woah! If you’ve ever thought that Lobo was off the rails, then Teen Titans #31 proves it. We left issue #30 with the Main Man’s surprise appearance, and if poor old Crush’s life didn’t feel like a train wreck before, it certainly does now!

Action, laughter, great dialogue and stellar art. The team of Adam Glass, Bernard Chang, Marcelo Maiolo and Rob Leigh always deliver comics that deserve gold stars. Glass’ ear for dialogue is brilliant, and the way he paces a story is terrific. The opening scene with Lobo’s arrival on Earth is really well done.
Bernard Chang can draw any character in any situation, and when his art is colored by long time collaborator, and color king, Marcelo Maiolo, the results are comics eye-candy. This issue is sweet indeed. Combined with Rob Leigh’s luscious lettering Teen Titans is consistently one of the best looking books on the shelves.

I know that I’m probably gonna get a lot of flack for this, but I’ve never really liked Lobo much. Yes, you read that right. His initial appearances, written by his creator and comics legend Alan Grant were fun, but the dude’s a murderer plain and simple. OK, so usually he’s just out there offing mercenaries and malcontents, but he kills indiscriminately and I find him morally reprehensible. The scary part is that some folk seem to like that.
If you listen to the wonderful (even if I do say so myself) DC Comics News Podcast you’ll hear a bunch of us giving our opinions on the Main Man in this week’s episode. I can take him in small doses, and l enjoy his appearances in DC animation, but I usually find him annoying and evil. This guy’s no hero. His treatment of Crush in this issue is disturbing and disgusting. The dysfunctional and toxic Joker/Harley relationship almost pales in comparison.

If Adam Glass meant to make me despise Lobo, then he’s succeeded admirably. While the action and dialogue were all top drawer, and the art was as brilliant as always, Teen Titans #31 still left a bad taste in my mouth. The final page cliffhanger didn’t help.
I hope that next issue’s conclusion to this story gets back on track and delivers our team of young heroes giving the Main Man a taste of his own bad medicine. Messing with the Teen Titans proves that you’re having ideas above your station.