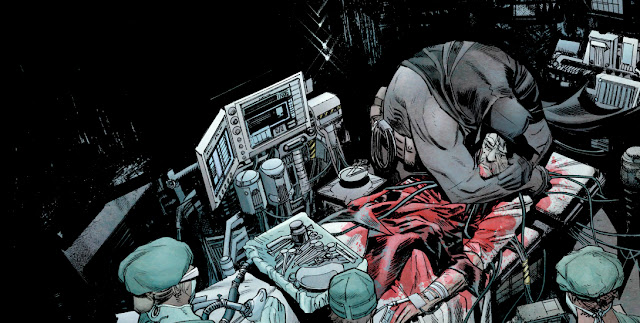 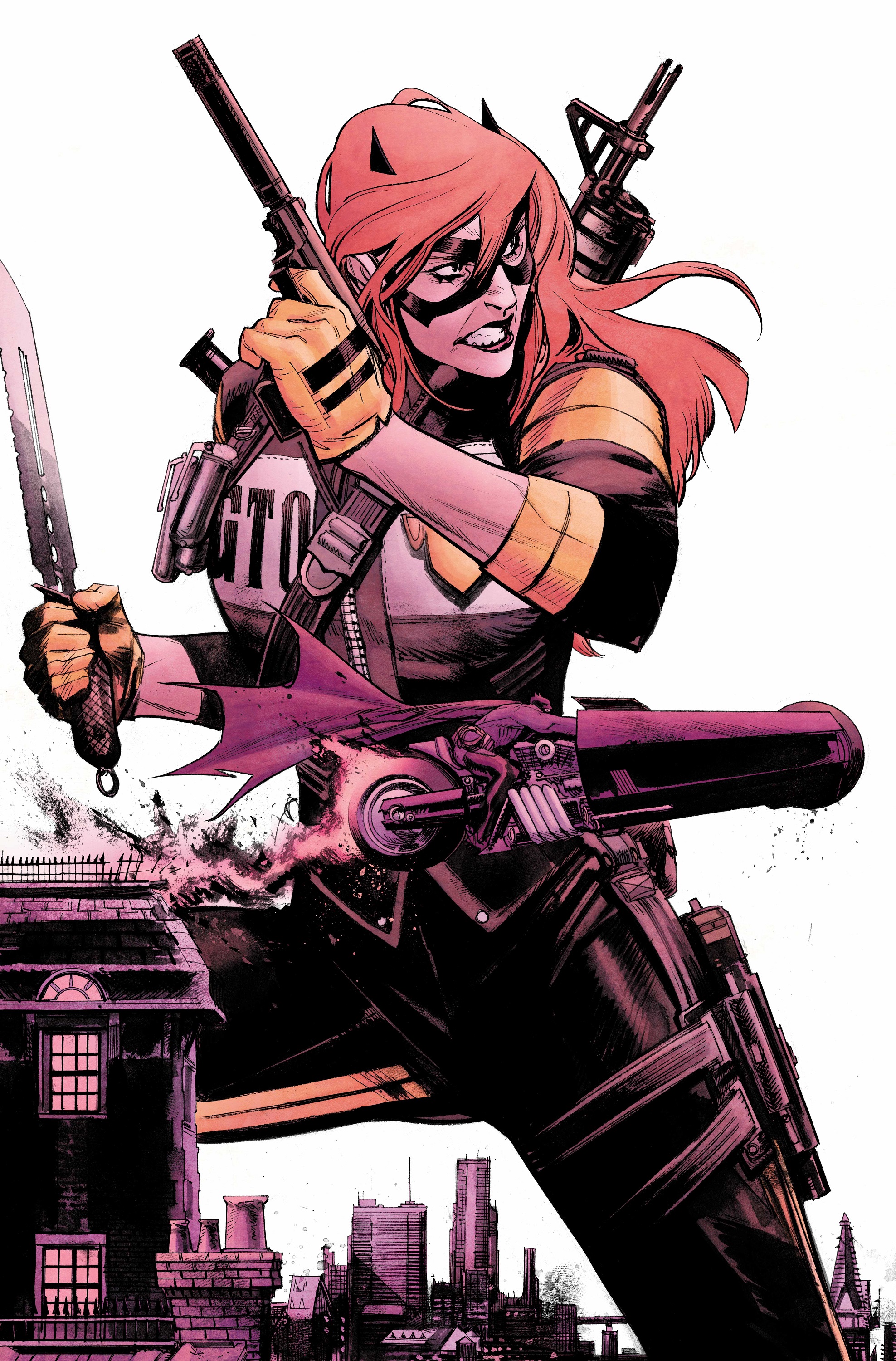 Batman: Curse Of The White Knight #4 has blown my mind. Commissioner Gordon is dead at the hands of Azrael, and Batgirl, his daughter Barbara, is out for revenge.
I honestly didn’t think that this series could match the original White Knight, but it has… and then some. This alternate take on Batman’s world takes us to places and situations that wouldn’t be allowed in the ‘canon’ titles. Losing Jim Gordon was a body-blow to me, as a reader, so seeing how Babs, Dick, Bullock, Montoya, and – of course – Bruce/Batman himself – react to this tragic loss is heartbreaking. Sean Murphy is writing a comics series that is way more than an action piece, there’s emotion, history, and a fair bit of horror thrown in too.
If I was Azrael I’d be really worried right now. Having Batman on your case is bad enough, but Barbara’s out for blood. Speaking of which; is that mystery man, who gave Edmond Wayne’s journal to Alfred and Leslie back in the day, the alter-ego of a certain rhyming demon? His hairstyle and impromptu vanishing act certainly point to this being the case.
Another lovely touch. 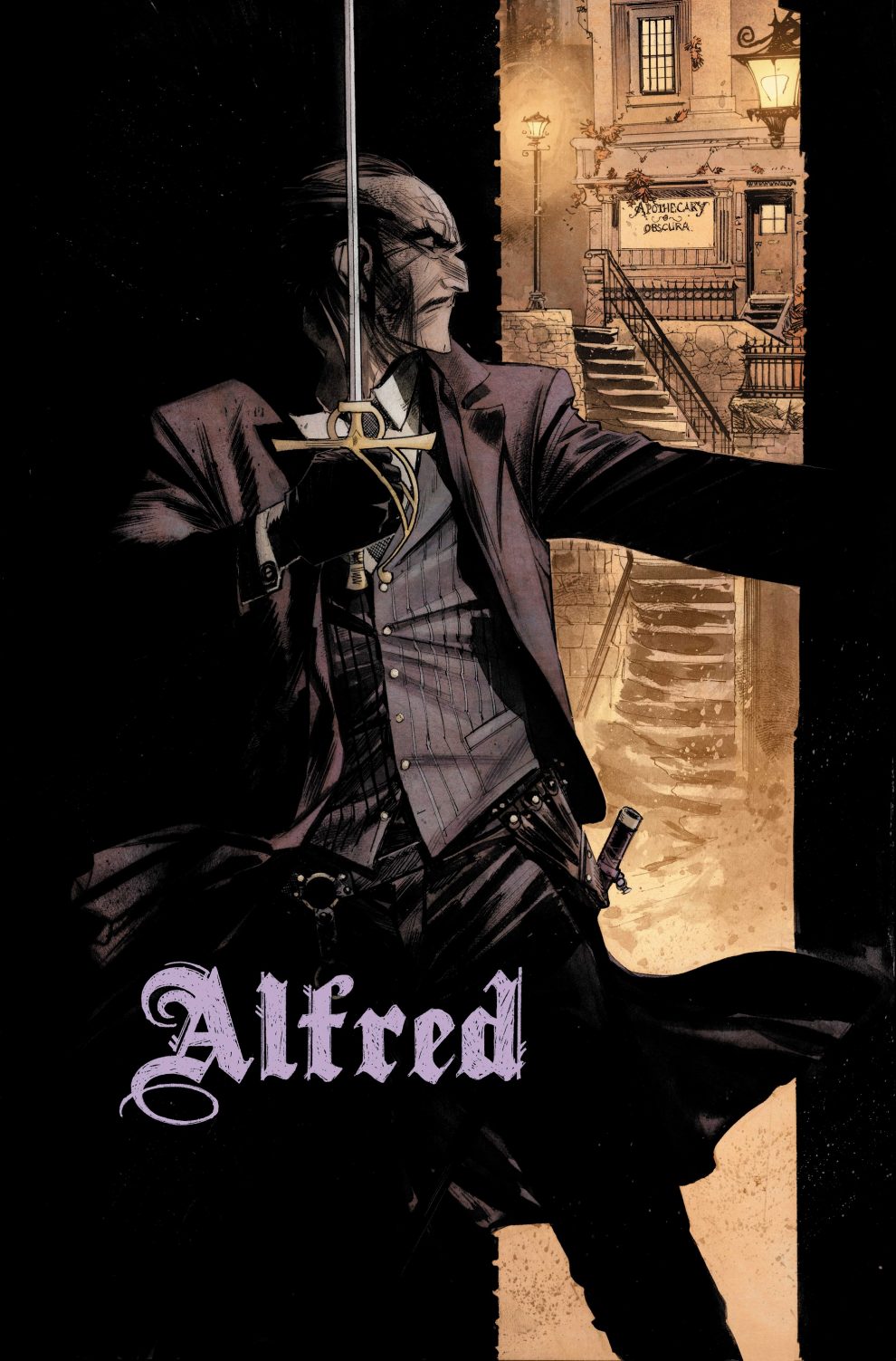 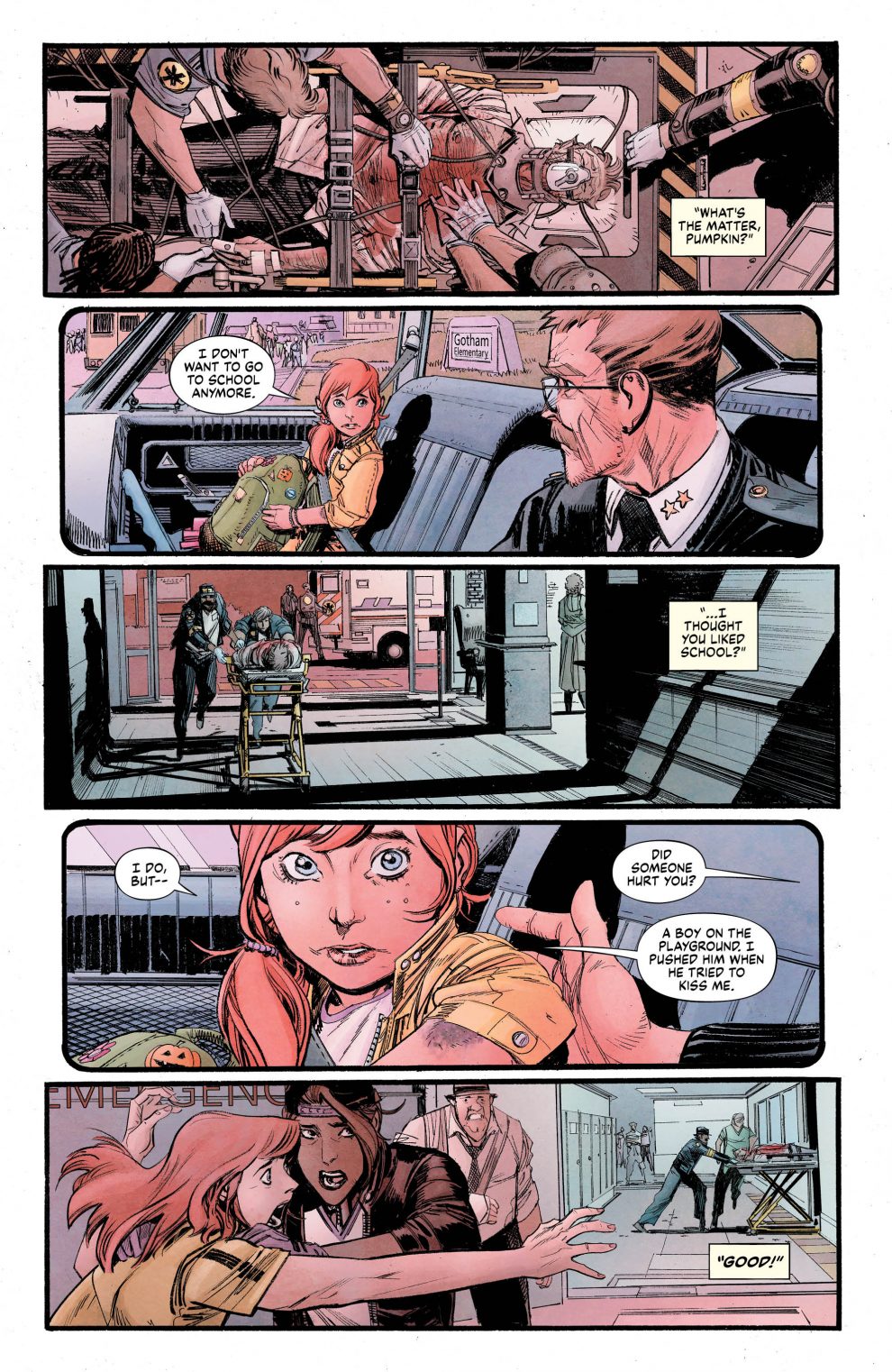 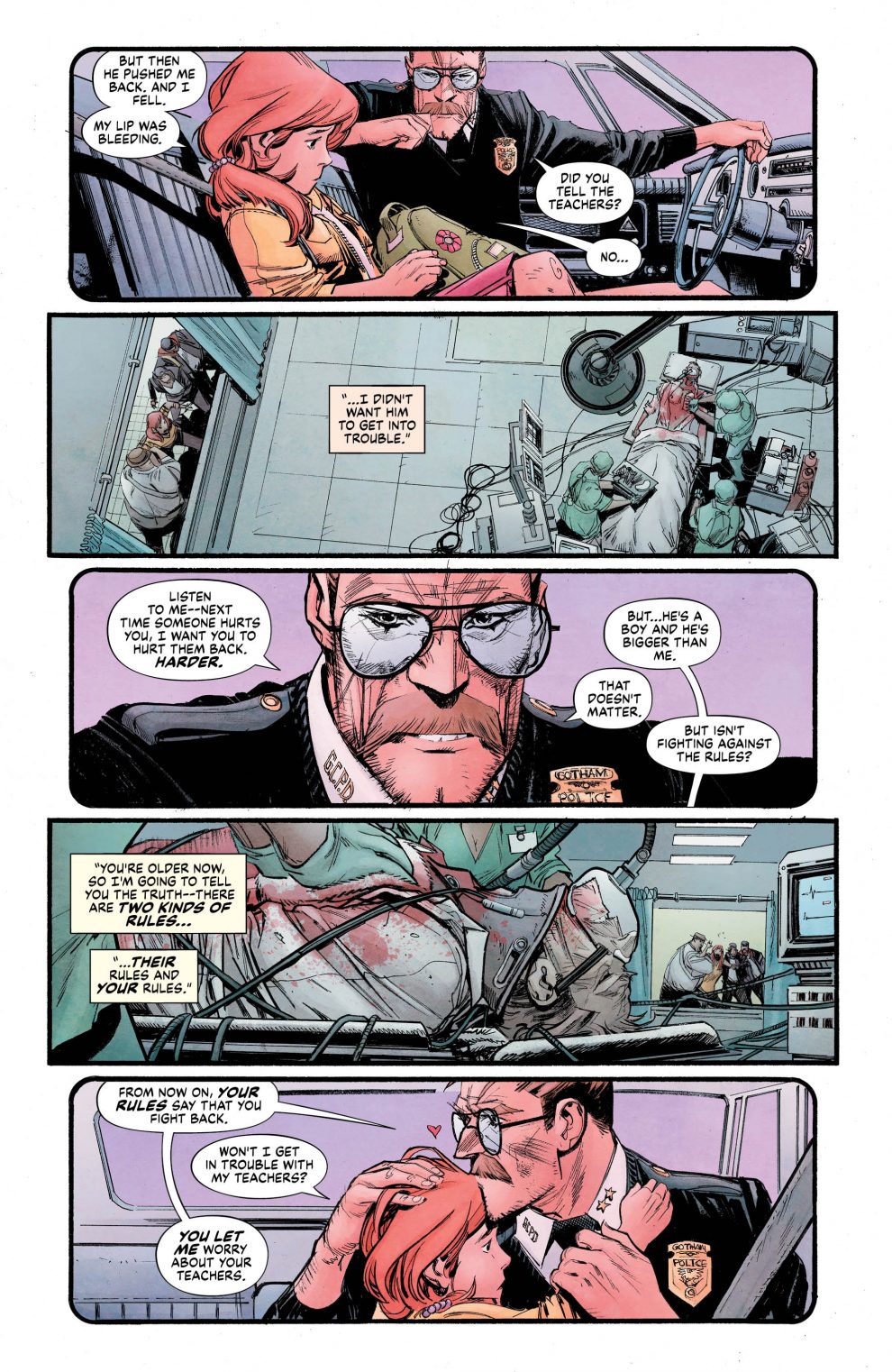 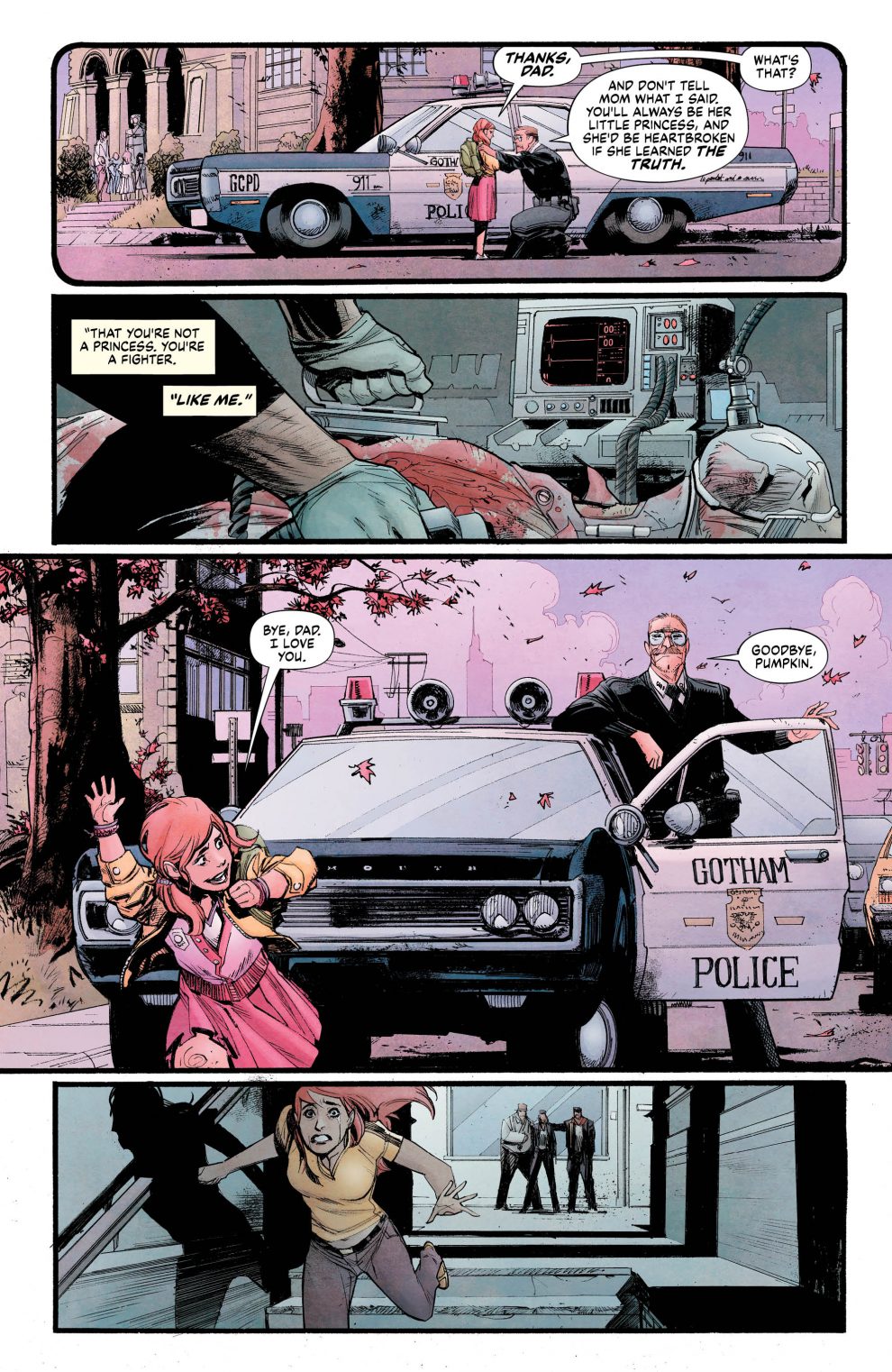 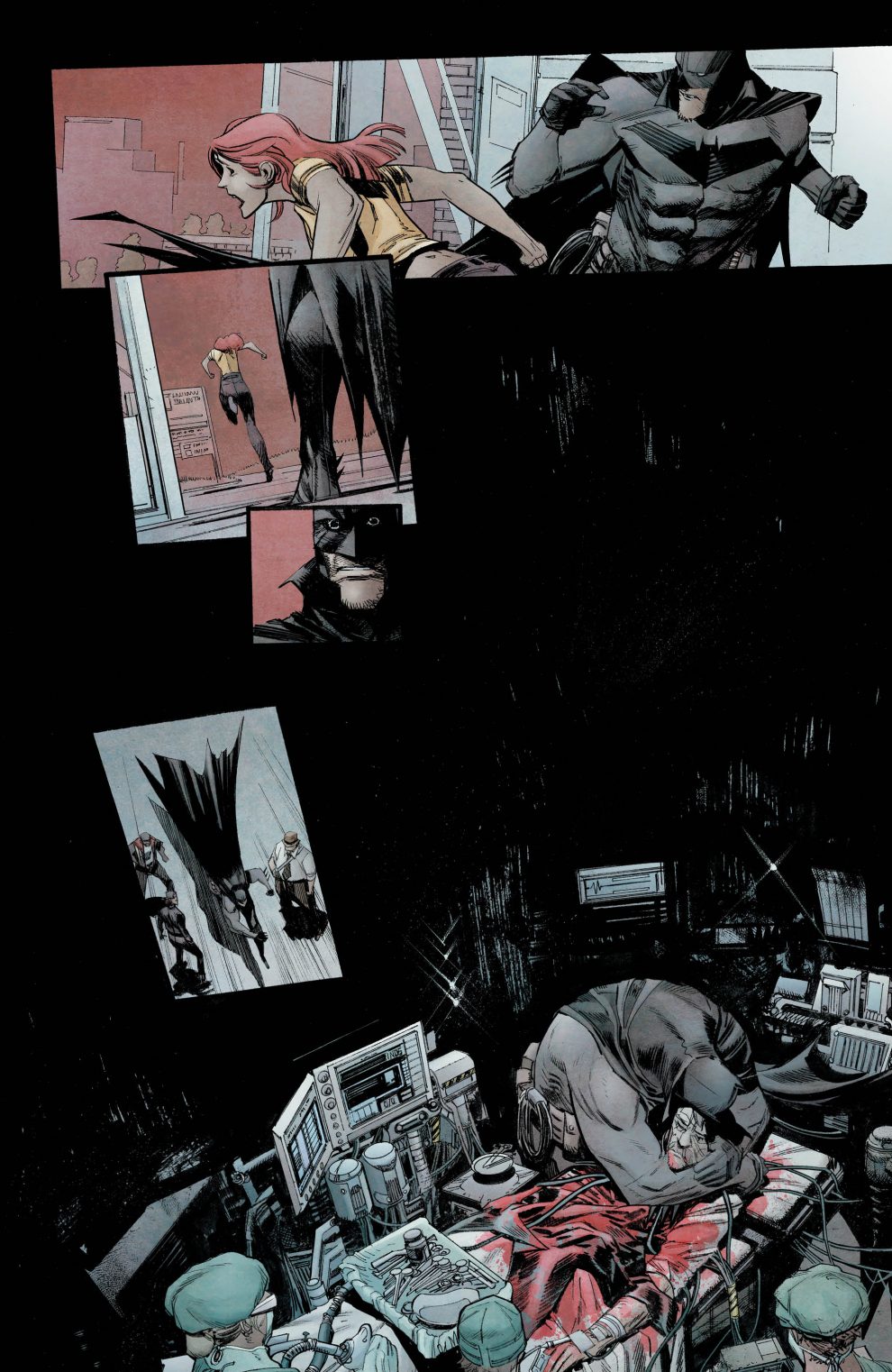 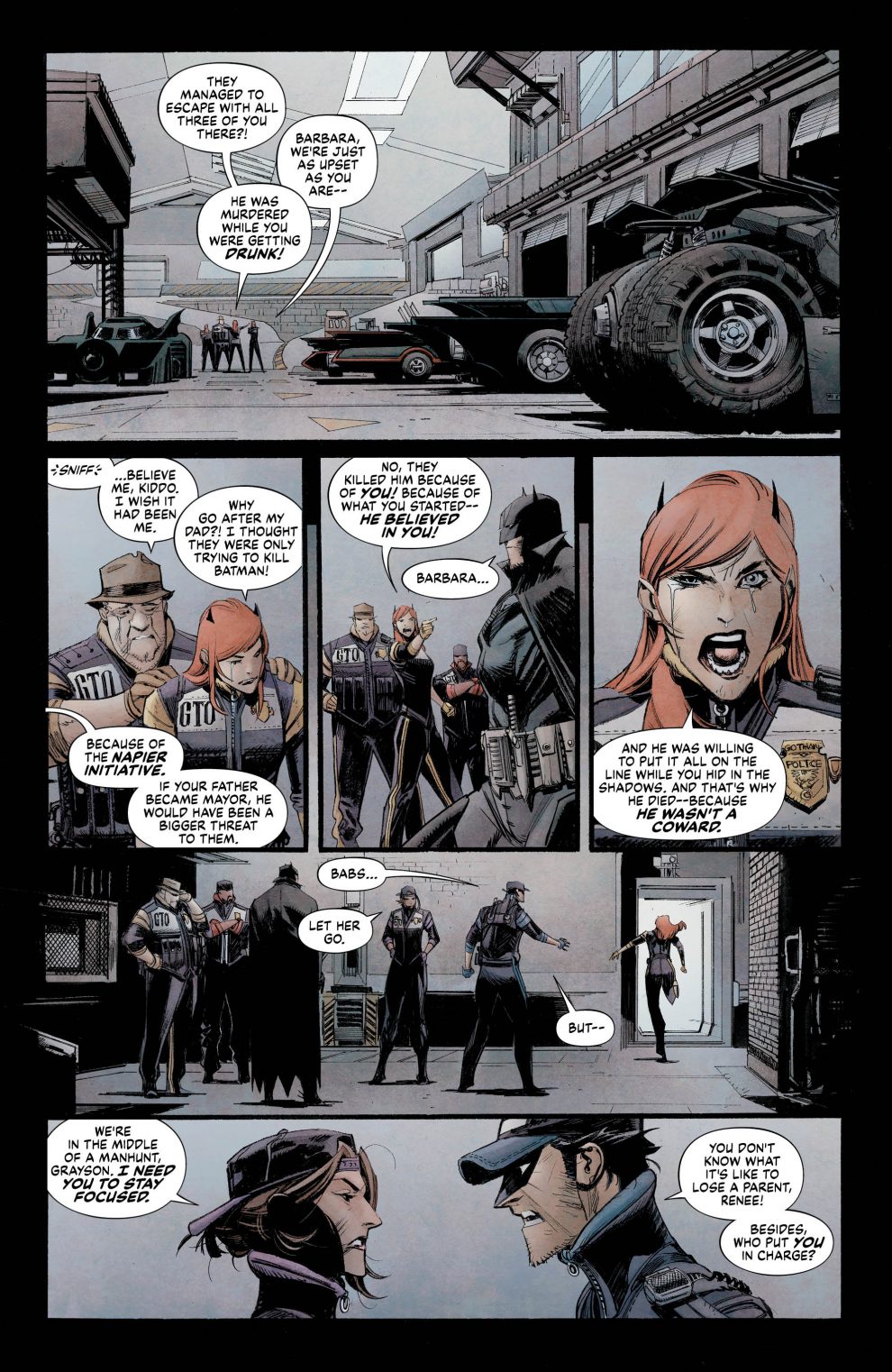 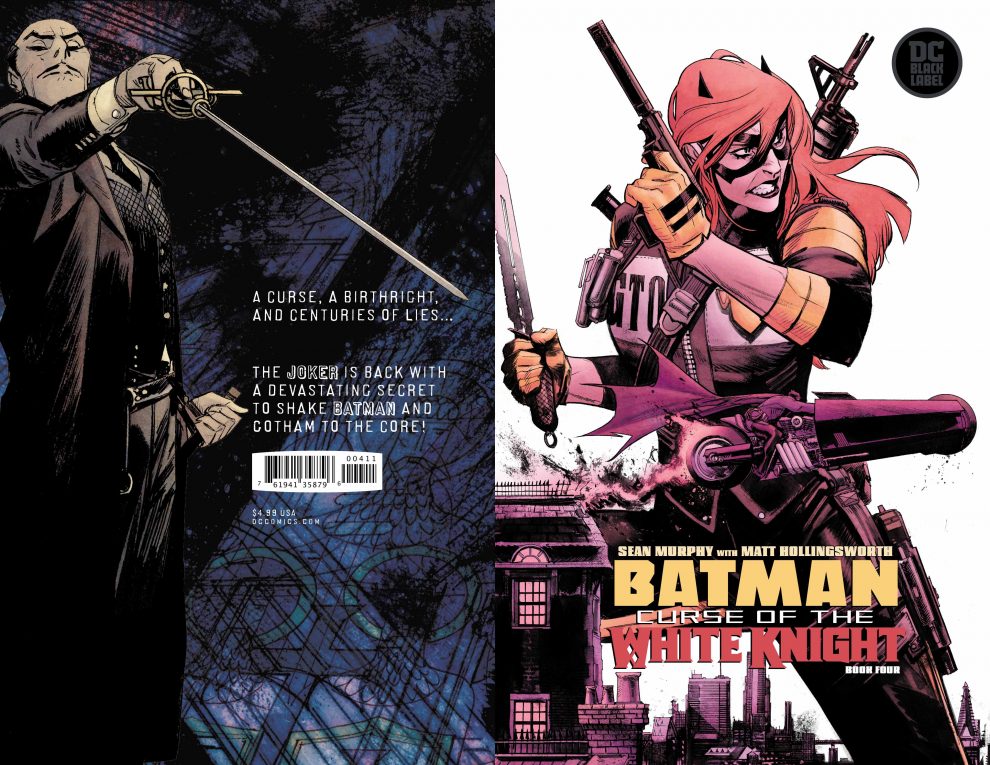 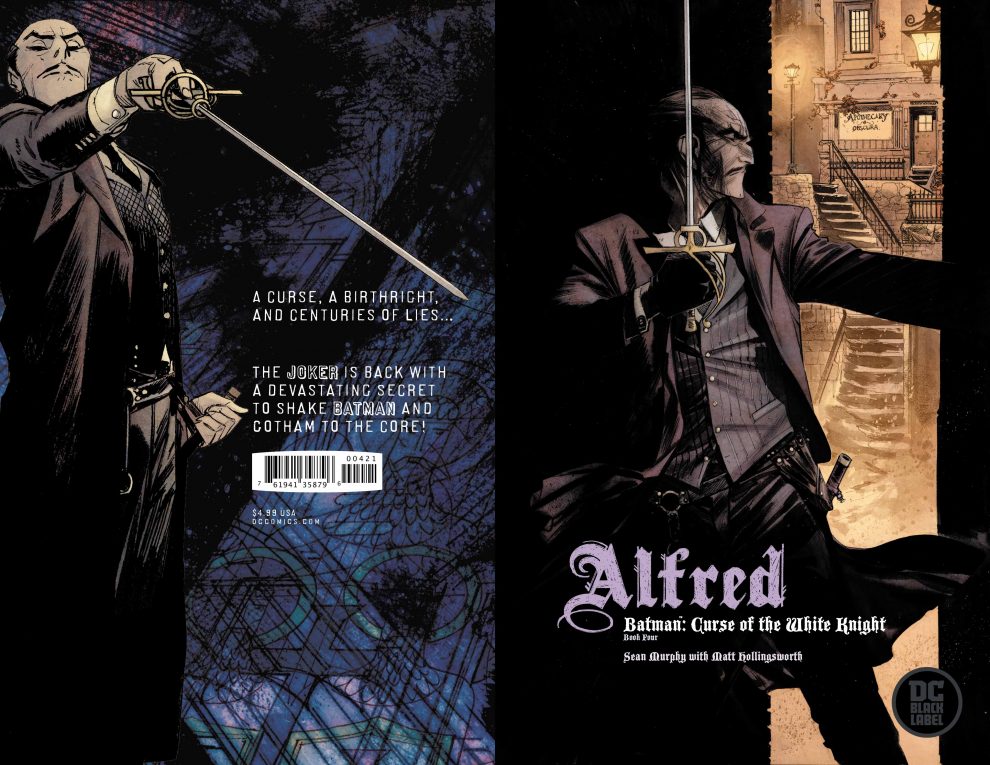 Murphy, Color Artist Matt Hollingsworth and letterers AndWorld Design are burning hotter than an avenging angel’s blade right now. Every single scene in this issue is perfectly scripted, drawn, colored and lettered. From seeing parked Batmobiles from across the ages parked at GCPD HQ, to the chase scenes and war on the streets, the action bursts from the pages. Then we feel rage and pain from Barbara and Bruce, like we’ve never witnessed before. Seeing Batman cradling his friend’s lifeless body in his arms, and watching him fall to his knees at Leslie’s feet, after giving her the news of Gordon’s passing, truly moved me.
If the opening scenes with a young Jim and Barbara Gordon on their way to school didn’t touch your heart, then I don’t believe you actually have one.
This title is very dialogue heavy, so it’s lovely to see AndWorld cut loose with some great sound effects in this issue. The BAVROOOM and VROOOOO of the Tumbler racing full-throttle through the streets of Gotham really made me happy, and must’ve been fun for them to letter.

Batman: Curse Of The White Knight #4 didn’t pull any punches, and the end of this issue was as shocking as the one we got last month. I truly feel that this is a war that Batman may not win, and his soldiers are falling like dominoes. If things weren’t bad enough already, the preview pages for next week’s issue tease the return of a character as intrinsically tied to Azrael as the Dark Knight himself.
The next four weeks can’t go by fast enough.