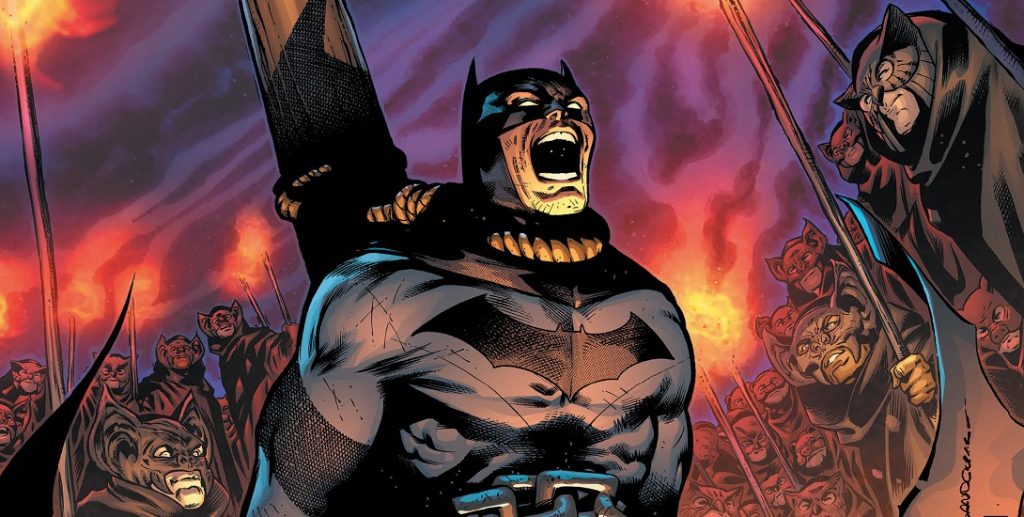 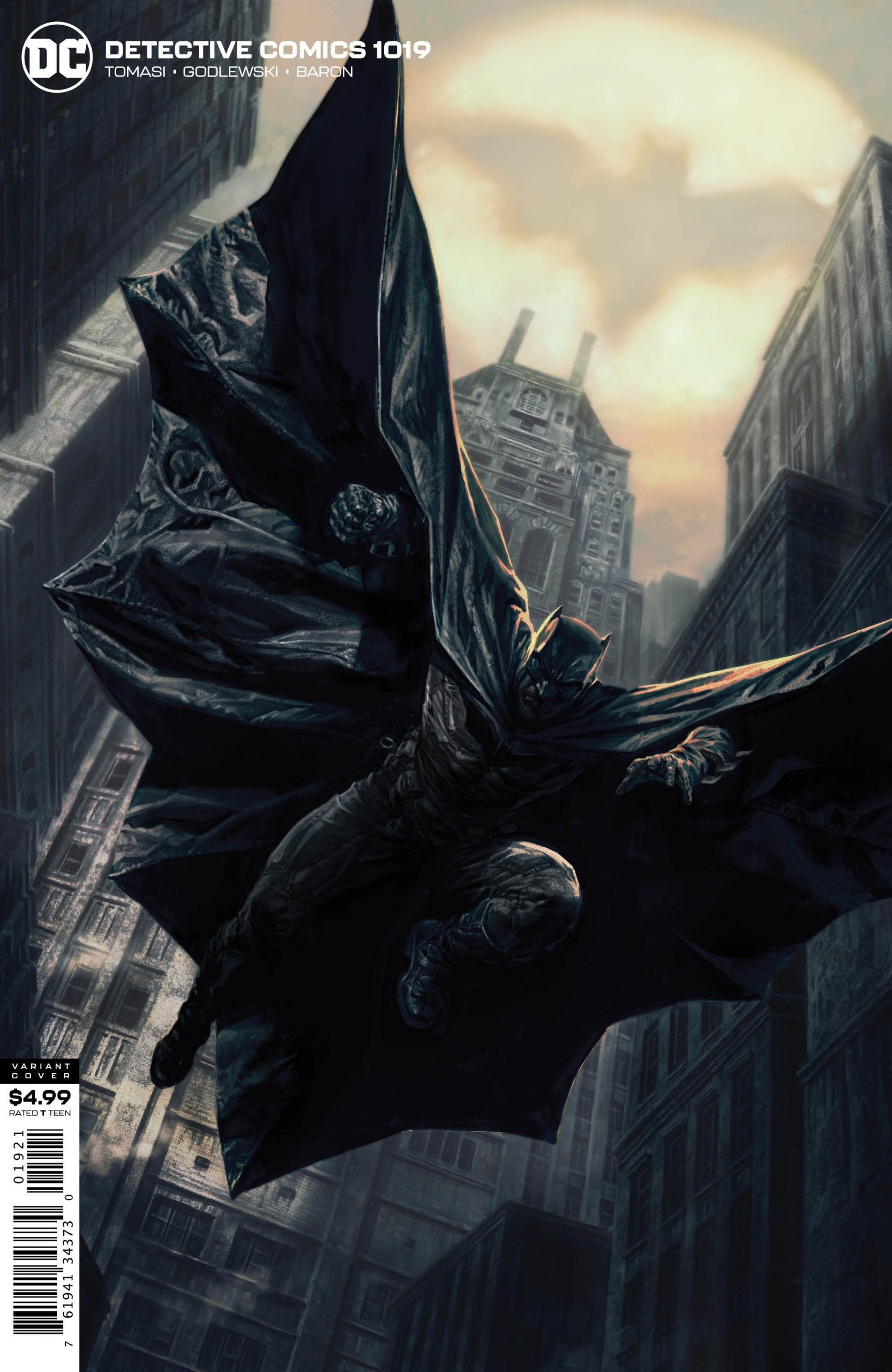 Detective Comics #1019 brings with it the second chapter of “Dead of Winter” and the payoff to issue #1018‘s cover, which didn’t make much sense ’til now.
Batman is on the trail of a murderer who’s leaving a trail of mutilated corpses, and pagan symbols in his wake. Can this Norse nightmare be stopped before he decides to “axe” Batman a question? Can you survive another bad pun like that one? Read on, if you dare!
Last issue gave me something I’d been missing for a while; seeing Batman as a detective. I’m very pleased to say that this welcome side of the Dark Knight is once again front and center in the latest chapter. However, I’m not pleased to report that, apart from that nice touch, I found this instalment a little disappointing. There’s plenty to enjoy about Detective Comics #1019, but it felt a little rushed. The concept of a serial killer with a Norse M.O. is a fascinating one, and something I would’ve liked to have seen stretched out over at least a couple more issues. Sadly the saga ends here, rather quickly, abruptly, and with rather more last page exposition than I care for.
On the plus side, while the monster was already spoiled on #1018’s cover, the method of it’s arrival and its surprising reaction to both Batman and the fanatics who summoned it was very surprising, and a lot of fun to read. 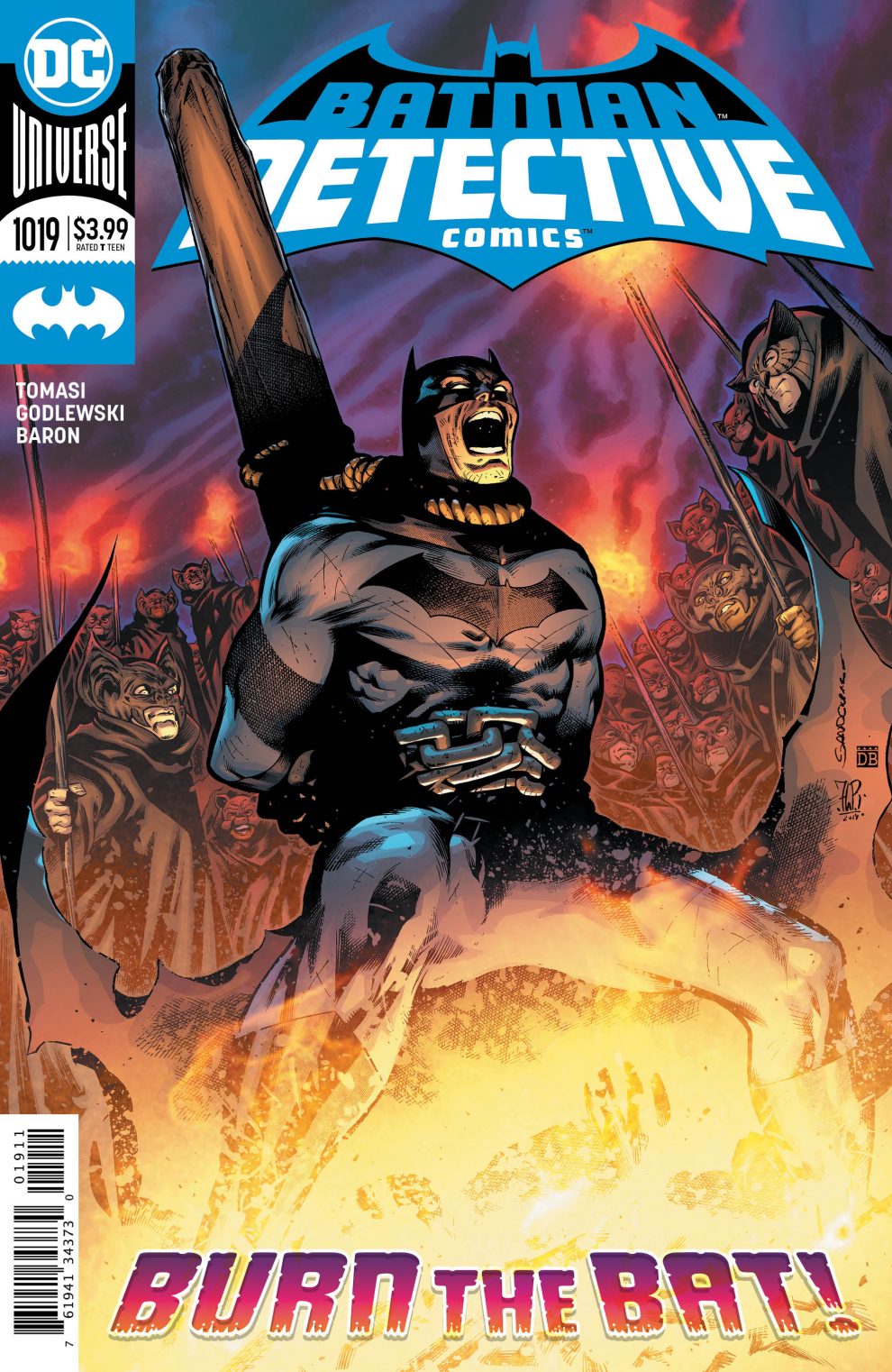 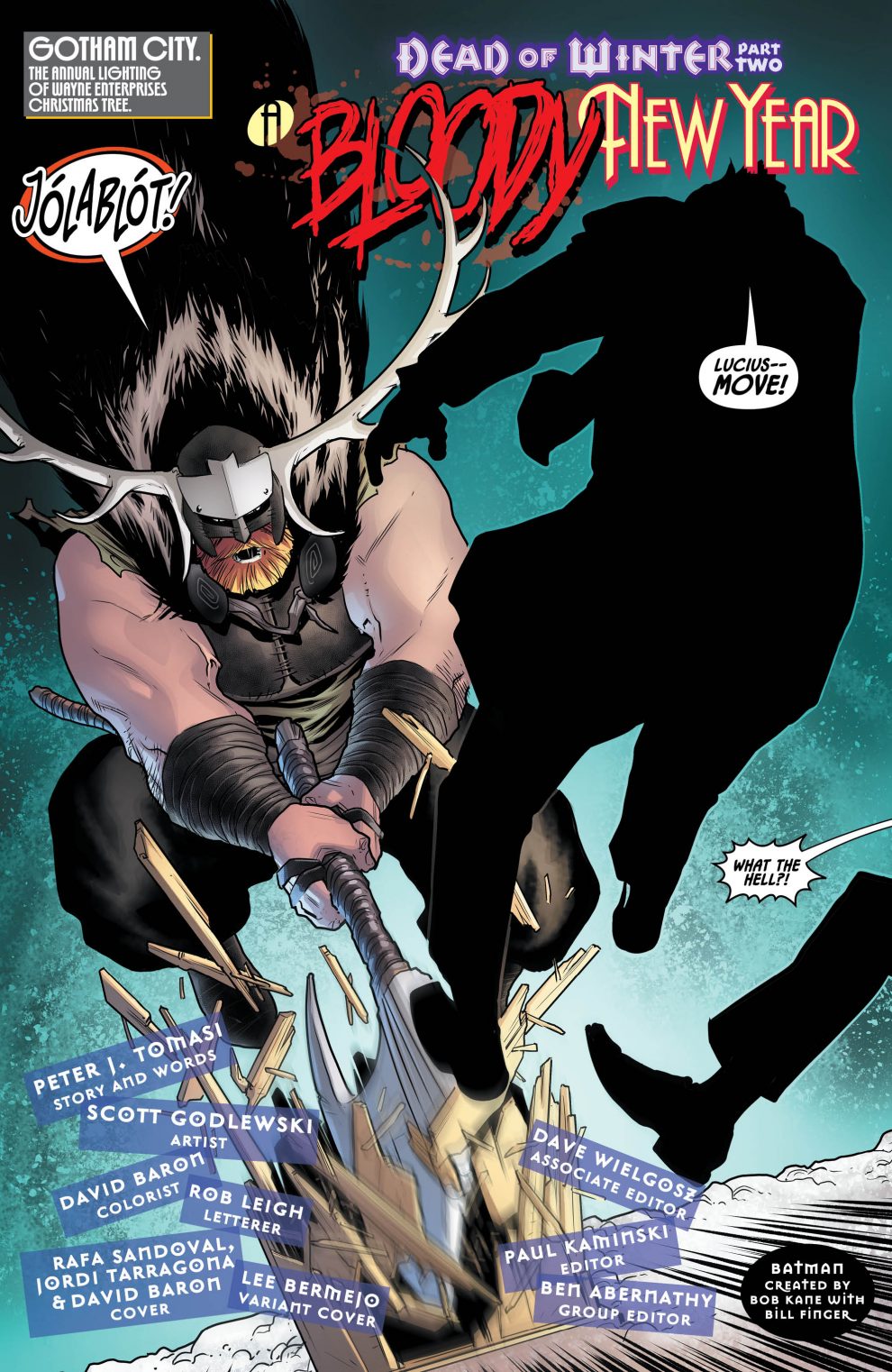 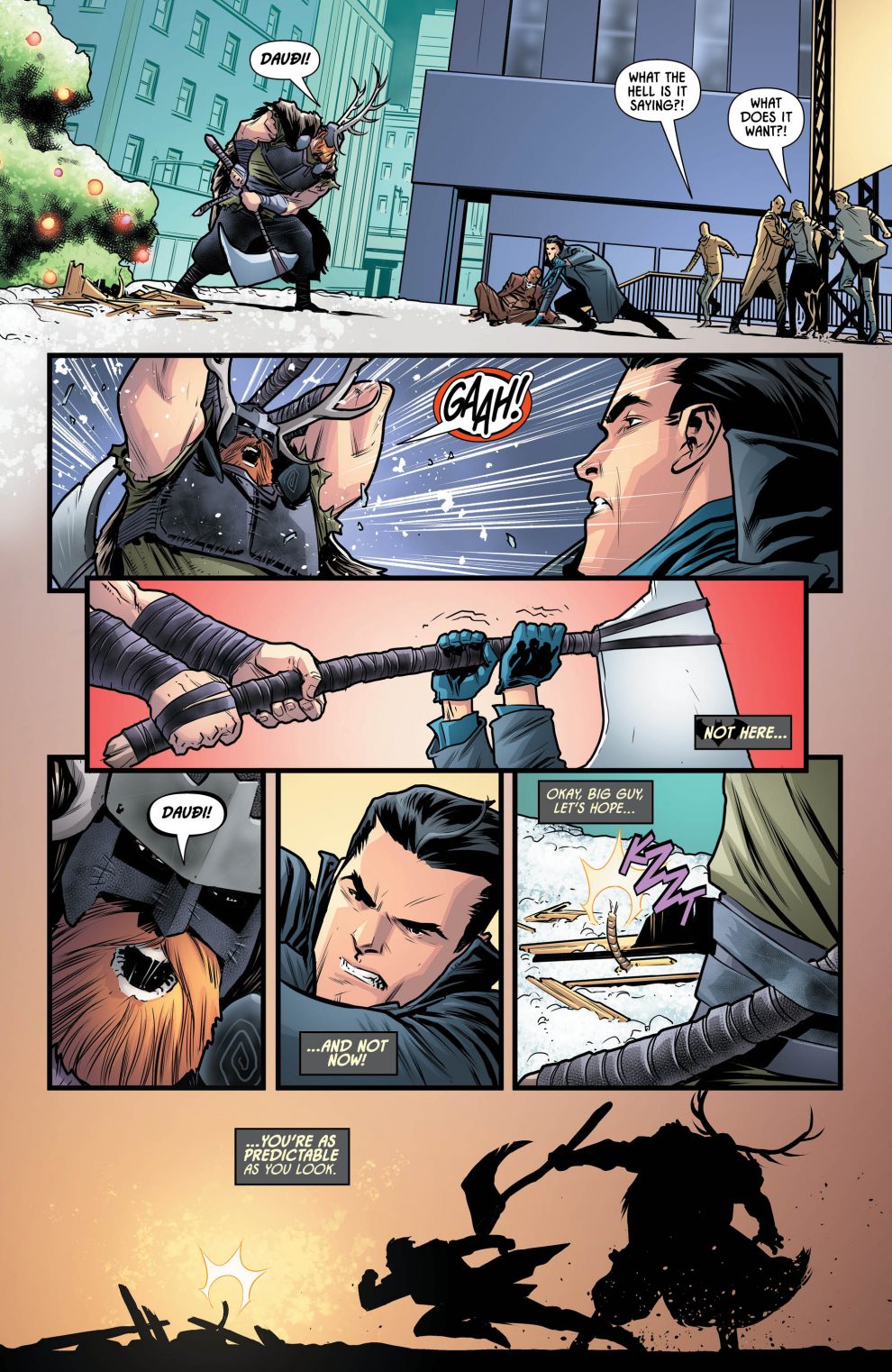 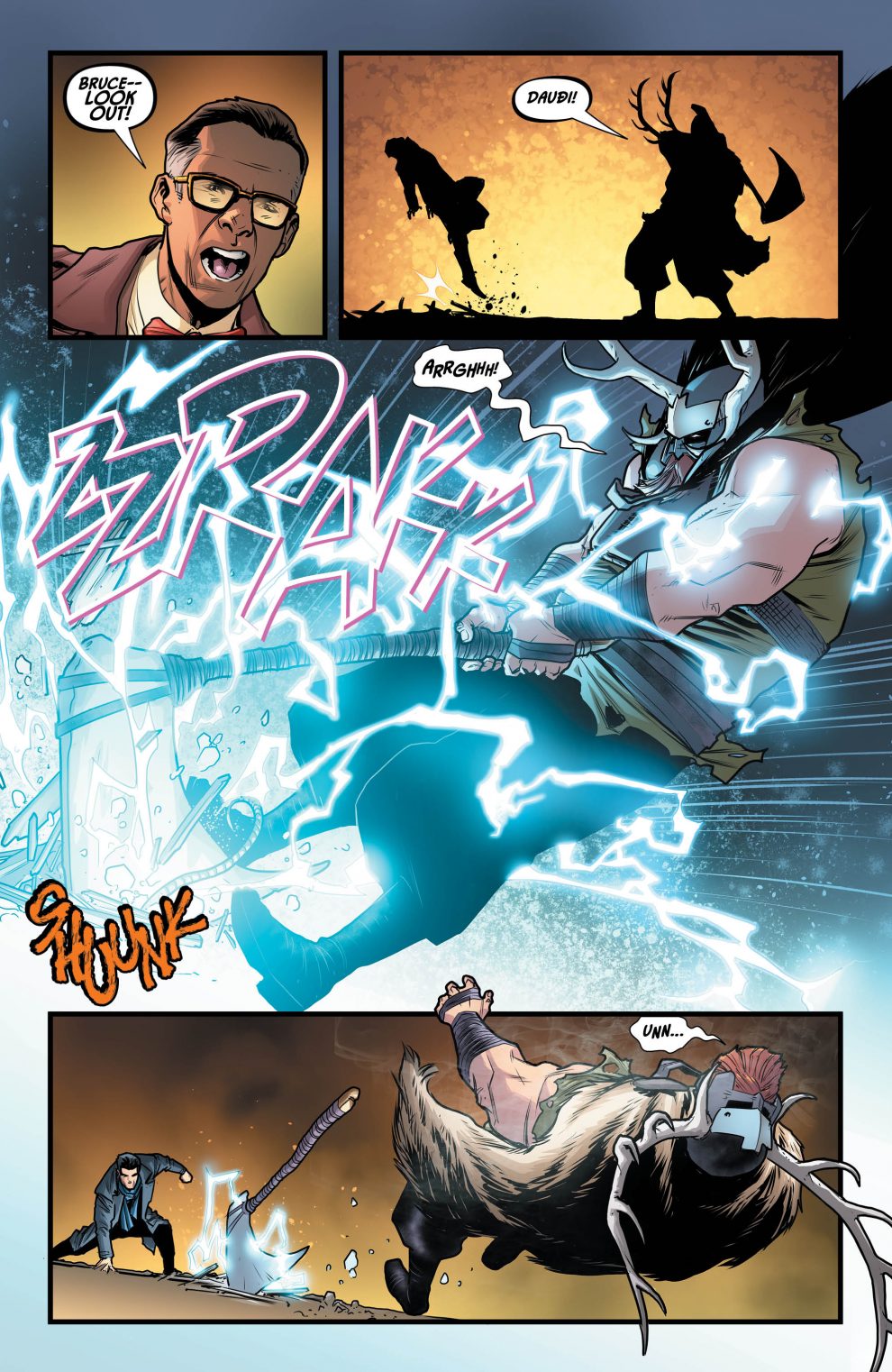 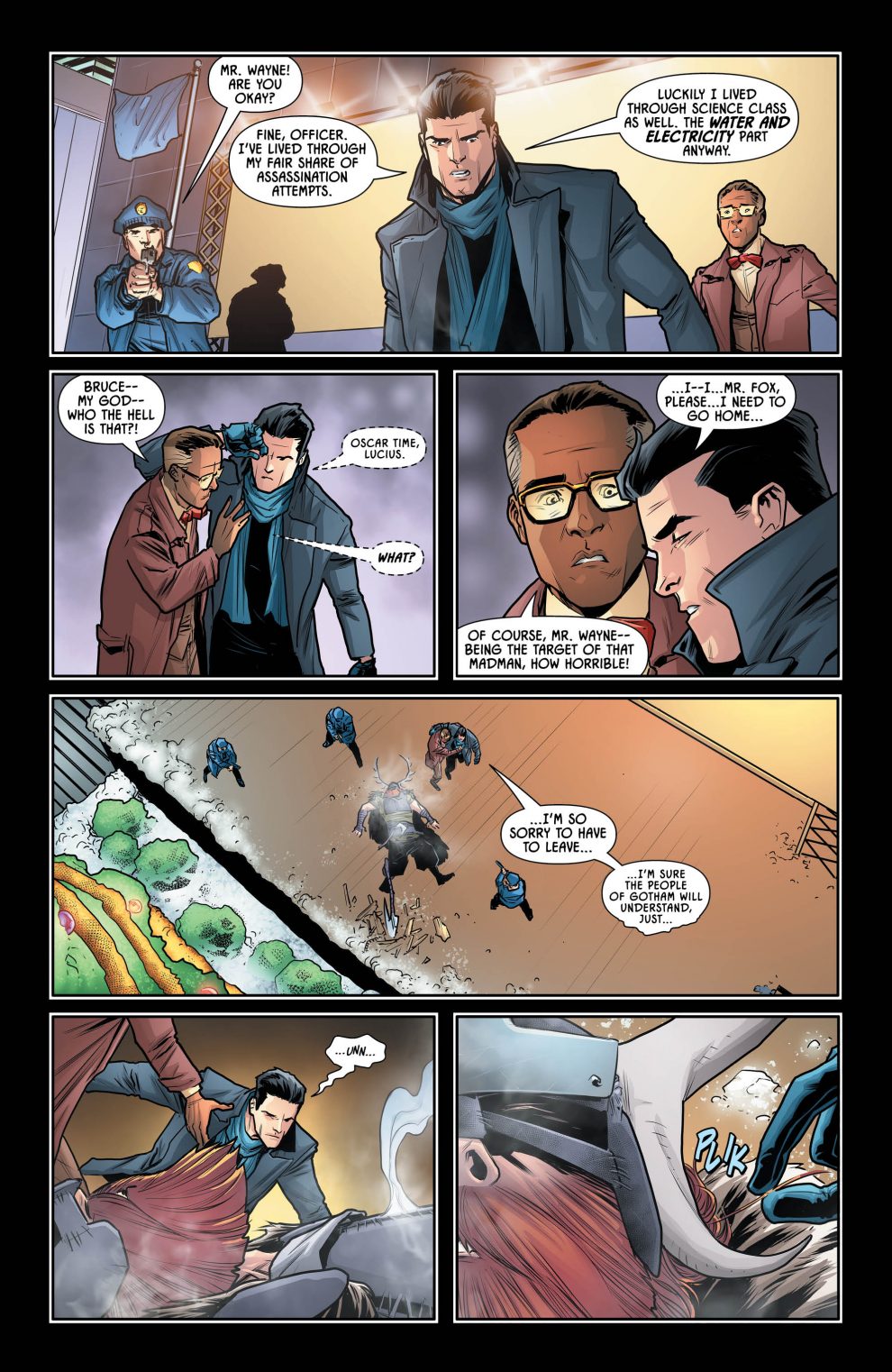 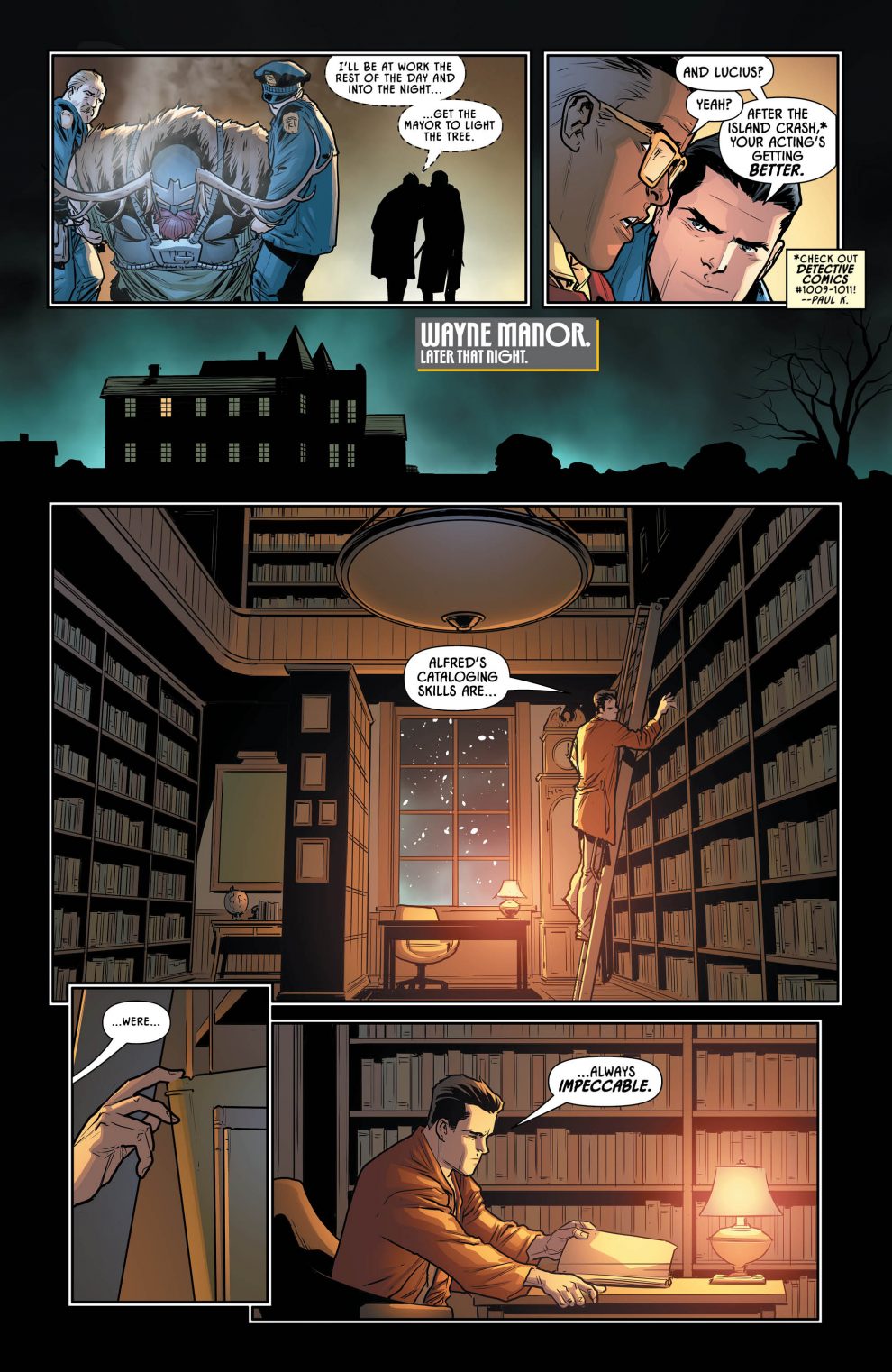 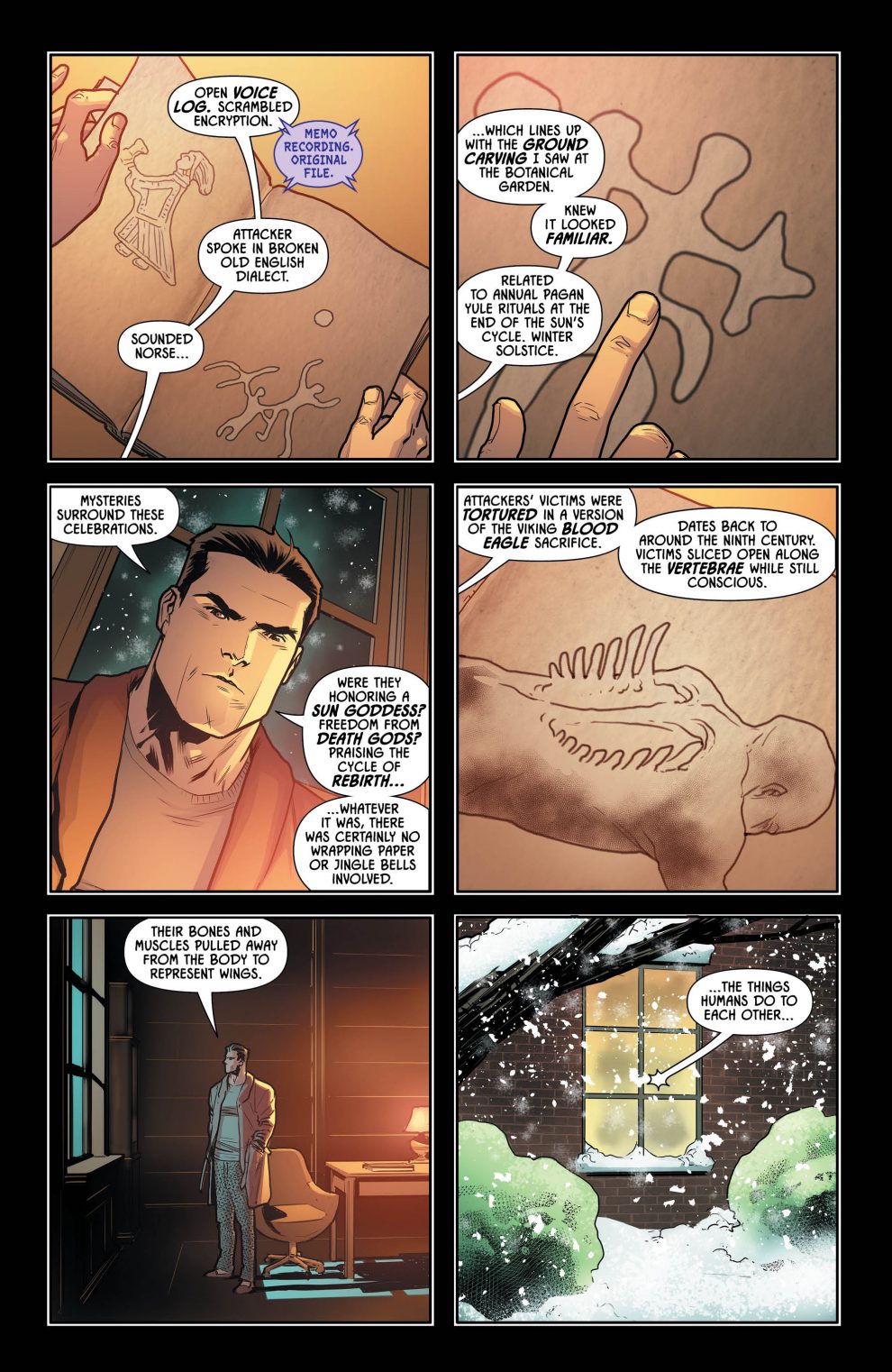 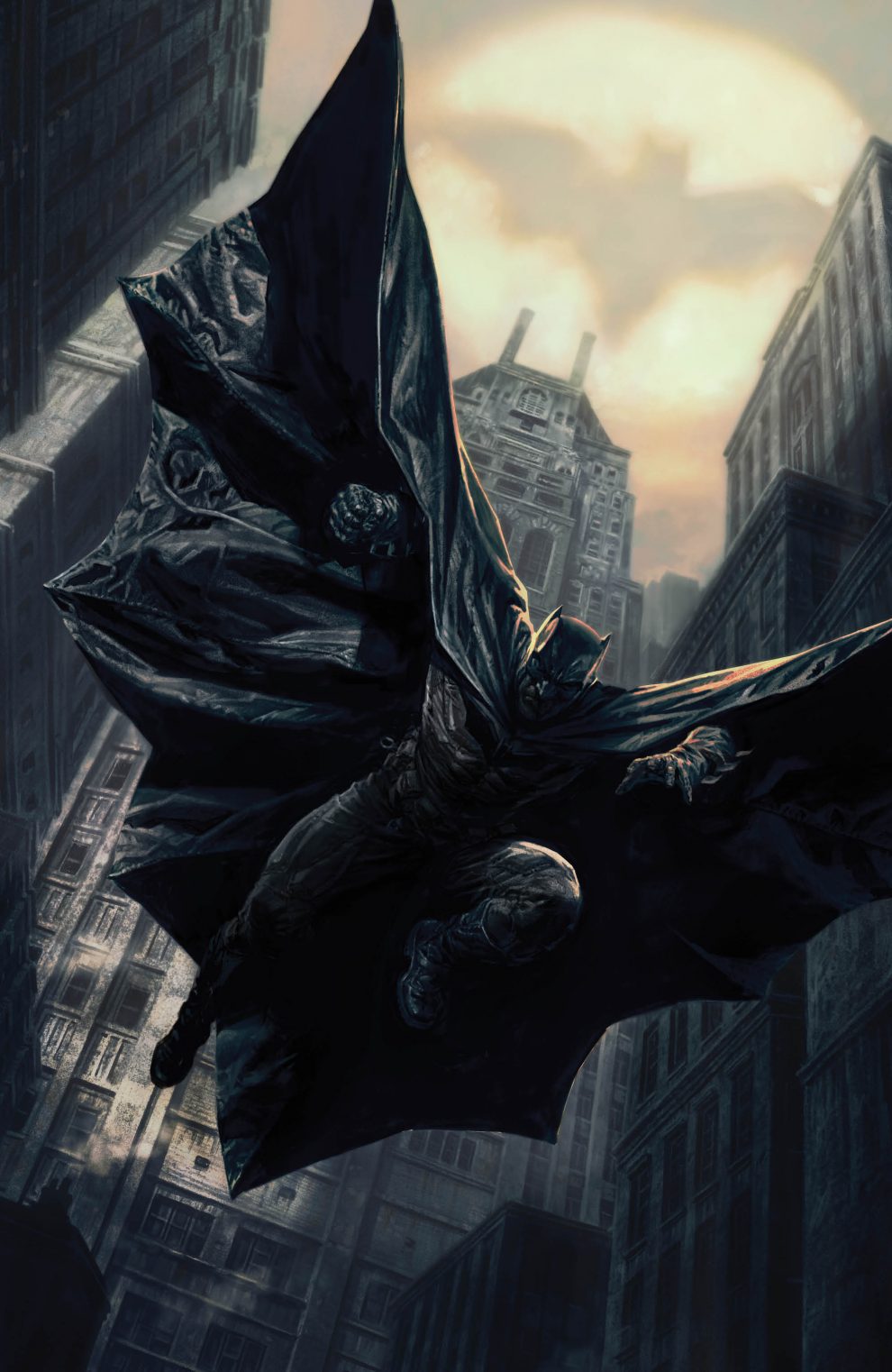 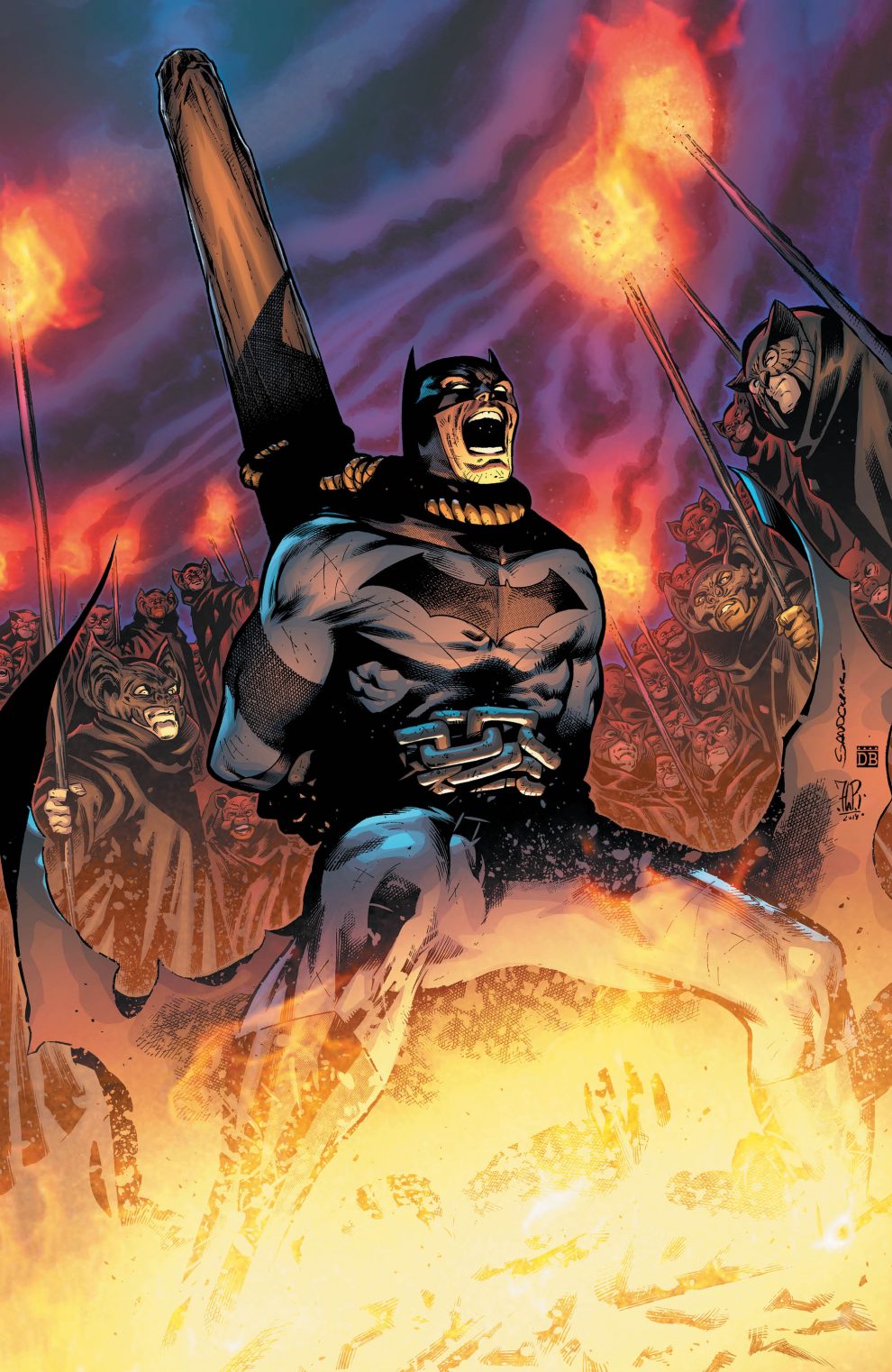 While the writing may not have been up to what I consider Peter J. Tomasi’s standard (I adore his multi-issue stories), I cannot fault the visuals in this issue. Scott Godlewski, David Baron and Rob Leigh deliver some truly gorgeous work. Page three is a prime example of line-artist, colorist and letterer delivering a finished product that truly shows a picture perfect comics collaboration. Godlewski’s characters feel and look like they’re moving, Baron’s colors and effects help the art leap off the page, and Leigh’s lettering leaves you in no doubt that the jolt of electricity was as loud and painful as it was visually impressive.
On the opposite end of the spectrum, the scenes in Bruce Wayne’s office are quiet, warm and – because of this – every bit as effective. I really want to see these extremely talented artists work together again, as that is just what they do in this issue… they work together.

Detective Comics #1019 is a decent comic, but is – in my opinion – the weakest issue of Peter J. Tomasi’s run thus far. Don’t get me wrong, there was still lots to enjoy, and the book’s well worth picking up, but after the build up from the previous chapter (and the first half of this one) I felt that it all fizzled out a little too quickly.
Visually, though, the book was bordering on flawless.
The final page teases the return of Two-Face, let’s hope that it also sees the brilliant Peter J. Tomasi back on form, as the last Harvey Dent story to appear in Detective Comics was one of the worst tales I’ve ever read in this, usually first-rate, series.
I have faith… I believe in Detective Comics.