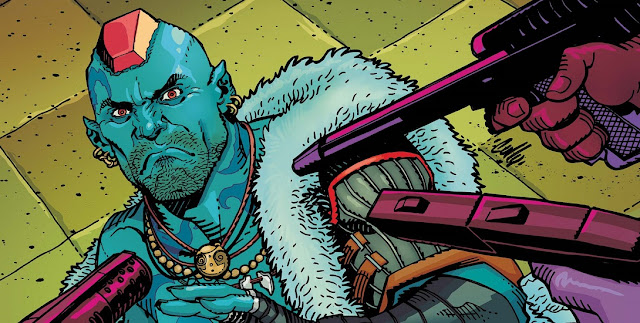 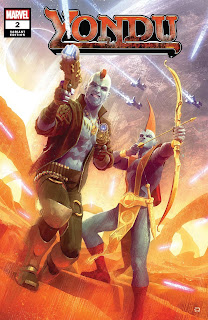 When we last left him Yondu was attempting to make his way to the one person crazy enough to help him. An old friend who wouldn't be scared of the Herald's Urn but might have a few choice words for Yondu for bringing such trouble to their door. With an assassin and a future ancestor named Yondu hot on his tail... let's dive into Yondu #2.


Zhala And The Essentials

The temptation to open the Herald's Urn avoided, making money is actively on Yondu's mind, so he makes his way to the Sticky Wicket in an attempt to get help from an old flame. Zhala is none too happy to see Yondu once he tells her why he's there. Of course, the answer isn't revealed until other more important hellos are handled... wink, wink. Sav'rkk the Shi'ar mercenary has arrived on Contraxia as well and has begun his search to find Yondu and immediately makes his presence felt. 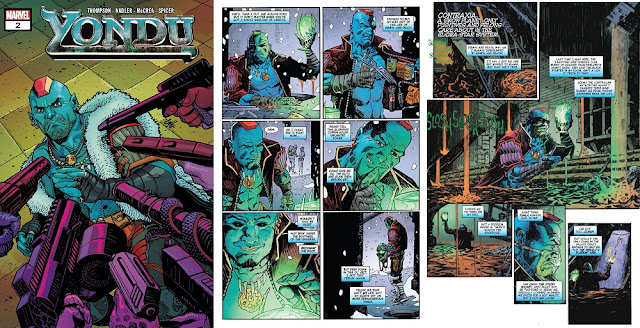 Zhala gives not only Yondu but the readers the breakdown of just what the Urn is and what it can do. Learning that the Herald's Urn holds the essence of Galactus's first Herald, The Fallen One. The urn was then believed lost to the ages...until now.

In Yondu #2, Yondu learns just how large of a pile he's stepped in. The end of the issue delivers an amazing cliffhanger that has us questioning the future. I admit fully that this issue drew me in, as I feel that the characters are developing, and it's been enthralling to watch. Between the movies and the comics, Thompson and Nadler have quite a bit of creative liberty to create a backstory for Yondu and for his race. So far I must give massive kudos for what they've been doing.

This team has succeeded beautifully in drawing the readers in, and the amount of humor and action is revved up in Yondu #2. The question remains though; is Yondu ready to face the consequences of his actions,whatever they may be now that he knows what he holds in his hands?

I love all the little details that make this series wonderful. My favorite moment this issue was Yondu's coat of wonders that included cheese puffs, baked beans and ridged BBQ chips.

Yondu #2 was a wild ride going full speed. The cliffhanger is done really well and the overall series is super enjoyable so far. I look forward to seeing what the future holds for Yondu.