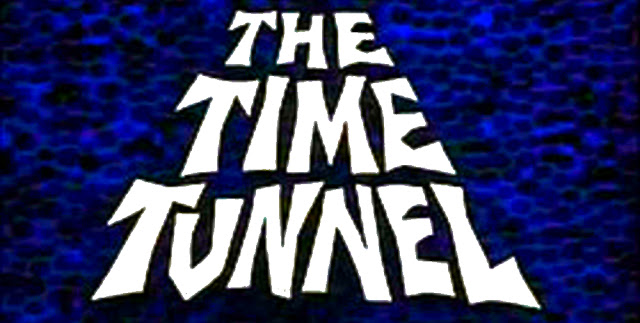 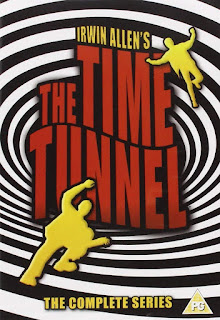 ‘Two American scientists are lost in the swirling maze of past and future ages, during the first experiments on America's greatest and most secret project, the Time Tunnel. Tony Newman and Doug Phillips now tumble helplessly toward a new fantastic adventure, somewhere along the infinite corridors of time.'

This opening narration to the 1960’s sci-fi series The Time Tunnel (episodes 2-23 anyway) sets the tone for what you are about to see. Even better, because this is another Irwin Allen show (his third foray in to TV science-fiction), the narration is spoken by the voice of The Robot from Lost in Space, Mr Dick Tufeld.

Following on from my article about Land of the Giants, I bring to you a retrospective look at another Irwin Allen creation.

The Time Tunnel, is a show that ran for only 30 episodes... this is a travesty, I tell you! The theme of it is Time Travel. Perfectly obvious really, but still, who doesn’t enjoy a bit of time travel? The 60’s had plenty of it; The Time Tunnel for one. The series was influenced by the 1964 movie, The Time Travelers for another. Let’s not forget one of my favourite movies, The Time Machine from 1960, a classic. Speaking of classics, the 60’s also brought us Planet of the Apes. Throw in Beyond the Time Barrier, Journey to the Centre of Time (a remake of The Time Travellers), the low budget Cyborg 2087 and the lesser known French movie Je T’aime, Je T’aime and we have a wealth of 60’s time travel hoppiness.

But this article isn't about those movies, so let’s go on more about The Time Tunnel itself. 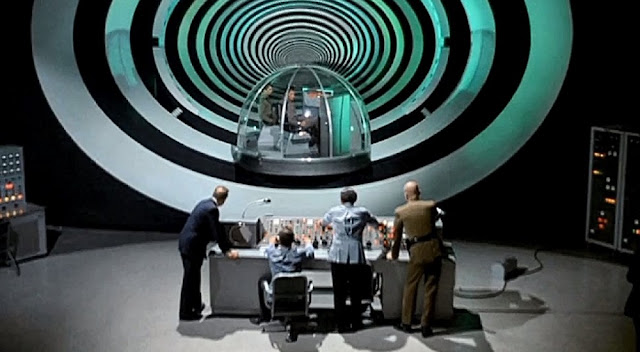 Launched in 1966, the series tells the story of ‘Project Tic-Toc’, a top secret government project to build a time machine. Because of its appearance, a cylindrical hallway, it is named The Time Tunnel.

The first episode of the series sets up all that is to follow; the same as any television show really. We have two doctors working on the project: Dr Anthony (Tony) Newman (played by James Darren) and Dr Douglas (Doug) Phillips (played by Robert Colbert), working on a time control experiment.

However, after 10 years there's still a lack of results, which in turn leads to budget cuts. Set with an ultimatum to send someone in to The Time Tunnel, or funding will cease permanently, Tony volunteers, but, as director of the project, Doug turns Tony’s offer down. You’d think that would be the end of it, wouldn’t you? No. Tony defies the order and sends himself into time... but where does he end up?1912 to be exact, aboard the doomed Titanic. Doug soon follows, urged to save his colleague (and possibly the ship); he arrives at the same time. There are plans and there are arguments over how to save The Titanic.  Unfortunately for them, it sinks anyway.

So what happens next? Well, rather conveniently and at a critical time, the two scientists are sent from 1912 to another moment in time. This sets out how the series will progress; a weekly jump to a new time, one historical event to the next.

It must also be noted that we do get to see the (made up) science of the show back at Tunnel HQ. General Haywood Kirk, Dr Raymond Swain and Dr Ann MacGregor (played by Whit Bissel, Jon Zaremba and Lee Meriweather respectively) are the ones making up the rules as they go along. They're able to locate Doug and Tony in time and space, observe and communicate with them, sending help as and when required.

What’s great about the show is that we see the main characters involved in some massive events from history (along with the odd jump into the future of course). As I said, the sinking of the Titanic was first up. We also seem them caught up in the attack on Pearl Harbour, the Krakatoa eruption and Custer’s Last Stand, amongst others. So you know, it’s kind of educational as well. To be perfectly honest, the show always worked best when dealing with past events. 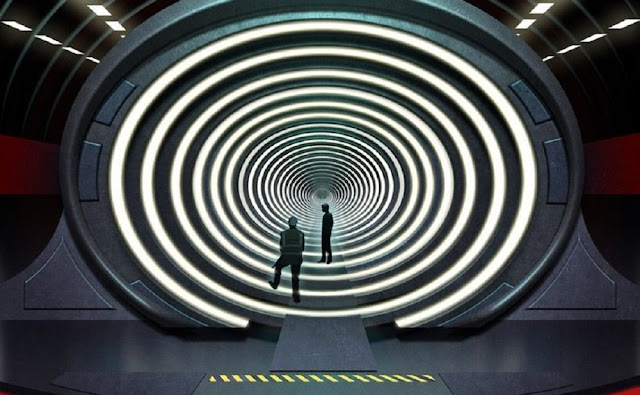 When I were a lad

This was a show that should have appealed to kids, and I have no doubt that it did in the 60’s. I remember first seeing episodes on ITV in the 1980’s. They were late at night so I would always plead with mum to let me stay up and watch. Like I say, it’s a show that should appeal to kids, it certainly did to me back then. Unfortunately, I was on my own, as none of my friends had any interest in this kind of thing. That 's always something that I missed growing up, whether it be shows like this, comics or anything else genre related; I never had anyone to talk to about this stuff. My mum would always listen though, bless her, so it was good.

The show saved money by using footage from movies and props and monsters from other Irwin Allen shows. There's no doubt that you'd spot if you’d seen any of them. I'm not saying that the show was inexpensive, it wasn’t, it still ran on a high budget, and had to, considering what the show was up against; Hogan’s Heroes and The Man from U.N.C.L.E. were big hits at the time. Plus, let’s not forget, The Time Tunnel premiered the day after a sci-fi show that you all will have heard of... Star Trek.

Viewing figures were high enough it was thought the show would be renewed for a second season... Magnificent! However, The Time Tunnel was abruptly cancelled before the filming of the final episode. There are certain well-known rumours on how the show would have finished; the best is that they made it home, the other and more ridiculous is that they are sent back to 1912 and the Titanic and the adventure starts again (sounds like nothing but repeats of the show to me). 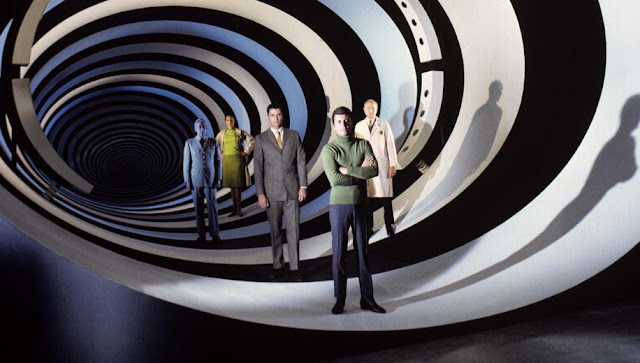 The Time Tunnel was replaced by a western series The Legend of Custer. The rumours are that ABC wanted to stamp their authority on the network. It's also been said that an executive was overheard claiming that “Irwin Allen’s giving you phoney history lessons inside cheap sci-fi schlock, but Custer was the real thing.” Nope, nowhere near. The Legend of Custer bombed, only lasting 17 episodes before it was cancelled, so cancelling The Time Tunnel was definitely the wrong move.

As for me, it’s a show that I have a lot of admiration for. The 60s were a fine time for science fiction, whether on the big or small screen and there were some really great episodes in this show's short existence. Some of the best include:

"Rendezvous With Yesterday" – a fine opener to the series which nicely sets the tone of the show, and features one of the most known events in history, the sinking of the Titanic.

"Kill Two By Two" – Features one of the most memorable villains of the series, played by Japanese/American actor Mako. He plays a downed Japanese pilot who is committed to duty and honour. A complex character who's more interesting to watch than some others.

"The Day the Sky Fell In" – Set during the events of Pearl Harbour. Again, the Japanese are the antagonists here, scheming and screaming bad guys. Here, we're treated to a bit of backstory from one of the heroes. Nicely done.

But there are plenty more, "Reign of Terror", "Chase Through Time" and "The Death Merchant" to name a few. Yes, some of the stories border on the ridiculous, and the science makes no sense... but, so what? Does it need to make sense, or is it there for our enjoyment? It's science 'fiction'. It makes no odds to me, this is a show that I can easily watch again and again. It's so much fun and the leads are excellent throughout. 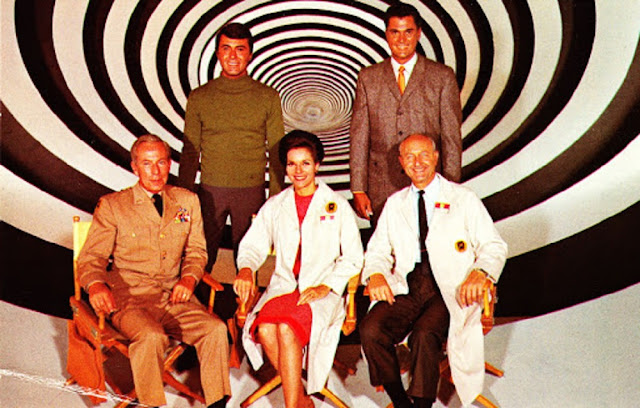 The story obviously influenced future shows. Quantum Leap in particular, which uses a similar premise, and owes a lot to this show... as does the Austin Powers franchise.

The story didn’t stop after the series though. as we were treated to novelisations and a couple of comic books. There was also talk of a remake in 2002 from Fox, in association with Irwin Allen Properties. Sadly, after the pilot was produced the decision was made not to go to full series. This pilot episode is however, an added extra included in the DVD release, on The Time Tunnel Vol 2, disc four.

There was also talk of a SciFi Channel remake in 2006, and work actually started on a pilot; Allen’s wife Sheila and two producers from the ill-fated 2002 remake were on board, and a script was written by John Turman, but it never went beyond that.

Generally, I'm not a massive fan of remakes. However, with the updates in technology we have today. I've no doubt that this show would be ripe for one. As long as it honours the original,  see no reason why a new take on a classic wouldn't be a success.

We can but hope.

Thanks for reading, and if you've enjoyed this article, or would like to leave your own thoughts on The Time Tunnel, then please do so.

The 60’s Sci-Fi Retrospective will return…

The Time Tunnel is available to buy on Blu-Ray and DVD.