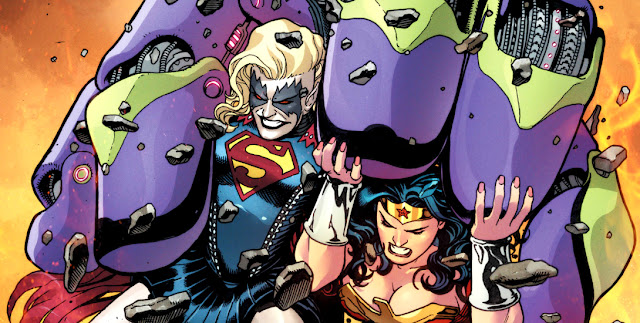 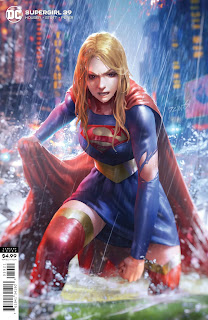 The epic confrontation between Wonder Woman and Supergirl rages on. We follow Diana’s struggle to try and get through to the troubled Kryptonian. At the same time, everyone’s favourite shady organisation hatches plans: not villains, not primal forces of chaos, but the truest body of insidious people: the government. With access to anti-Kryptonian weapons, the fight comes to Supergirl, with unexpected and dangerous results.

This issue continues to bring us the pulp we’d expect from a blonde lady with godly powers, as we’re consistently treated to spectacles of strength and might. We always see her at the height of her power, crushing hordes of bad guys with the greatest of ease, but with her change of heart at the hands of The Batman Who Laughs, we get to see that power used for ill. This makes for compelling action.

The problem with characters of such immense power clashing like this will always come up. We have to wonder if there’s actually anything at stake. The civilians caught in the middle do a good job of making us wonder, but even then we aren’t sure. This all stems from it being an ongoing story across multiple titles. Sure, the editing team helps, by saying what we missed and in what issue, but to readers who only get this title, we get enough of a story, but our focus on what we should worry about isn’t there. This leaves a reader feeling that Kara and Diana are duking it out just because they can.

A closer look at what’s going on does give the reader a really satisfying story. It’s easy to get wrapped up in the action, and that’s fun too. For some though, we can really see how Supergirl is motivating herself with her new outlook. Supergirl #39 shows us the real terror of misusing power, and how we should wonder if being a hero and acting heroically are different things.
Thoughtfulness, wrapped up in intense action, is exactly what people should get from their stories.