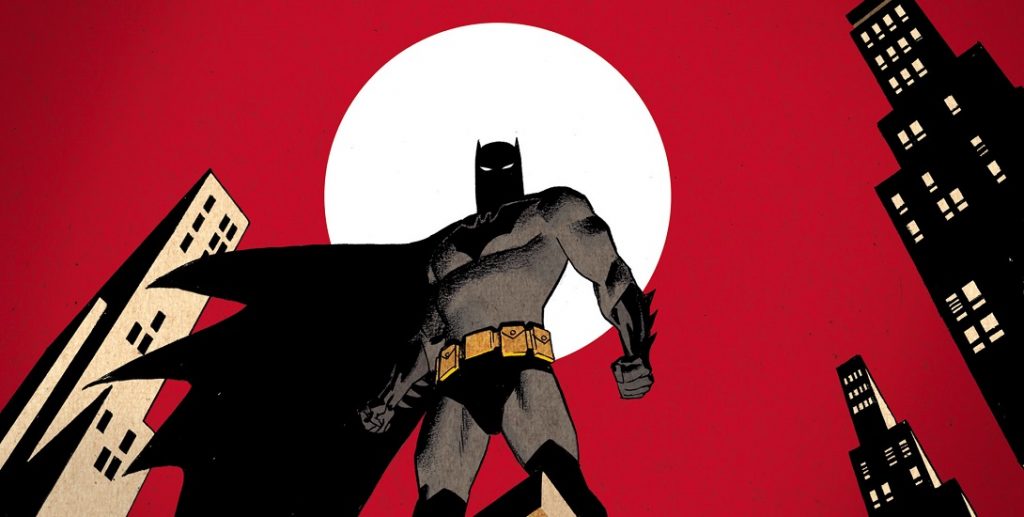 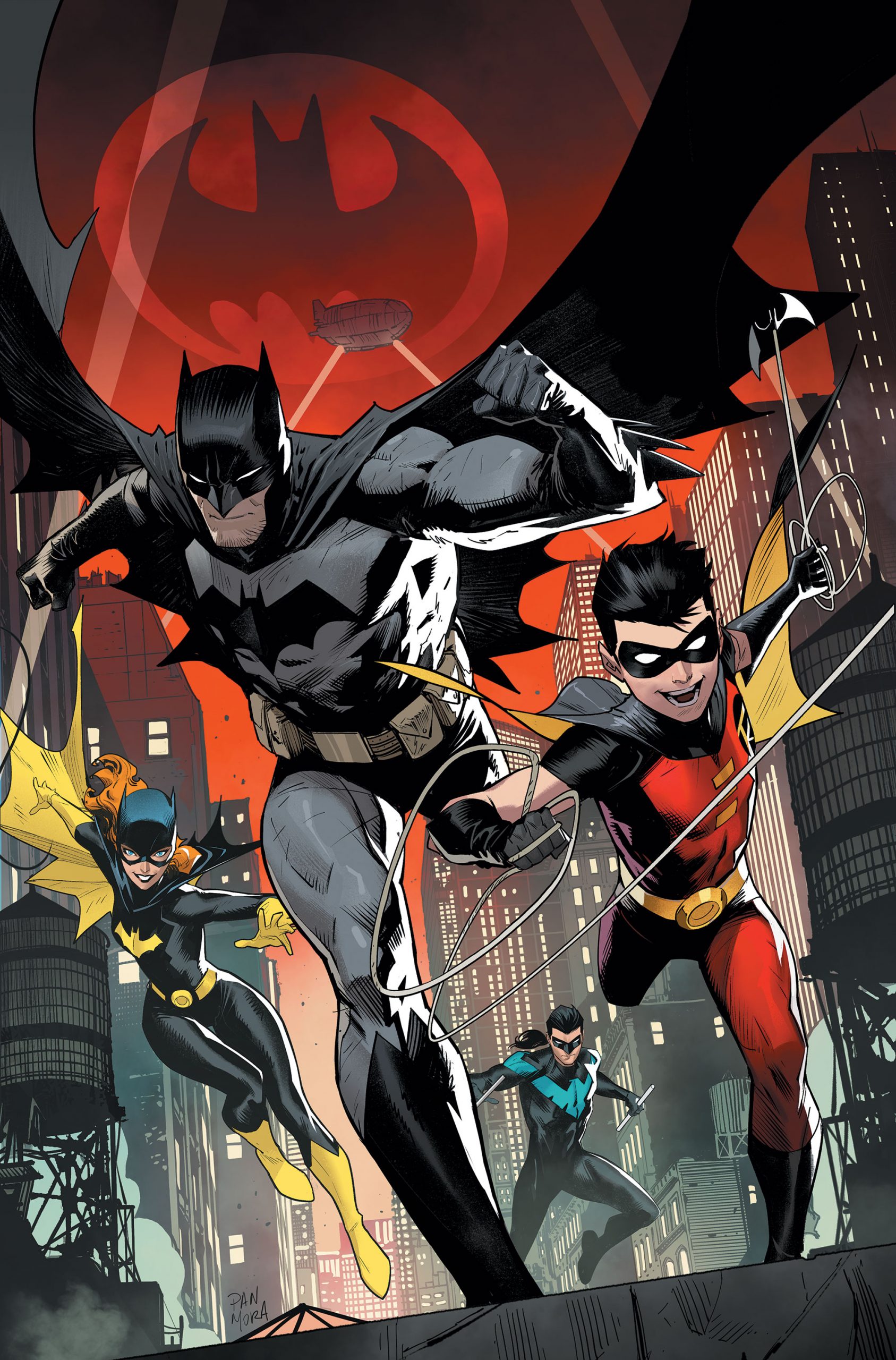 Review by Steve J. Ray
It’s here! Two weeks ago we reviewed the digital first issue of the new Batman: TAS inspired series, and now Batman: The Adventures Continue #1.2 has arrived, and it was well worth waiting for. Many questions get answered this week… but not all of them.
If you caught the magnificent dramatic reading of issue #1.1 by Kevin Conroy last week, then you already know who the mysterious figure was. If you didn’t then you need to buy this comic. We also find out what powers Lex Luthor’s giant robot, and just what happened to Superman. All the reveals are cleverly handled by writers Alan Burnett and Paul Dini.
This issue felt just like the amazing Batman Adventures comics of the 90s. The pacing is fantastic, and so much story has been crammed into these pages. The best part is, it doesn’t feel shoehorned in or forced, the issue flows brilliantly and is beautifully drawn. 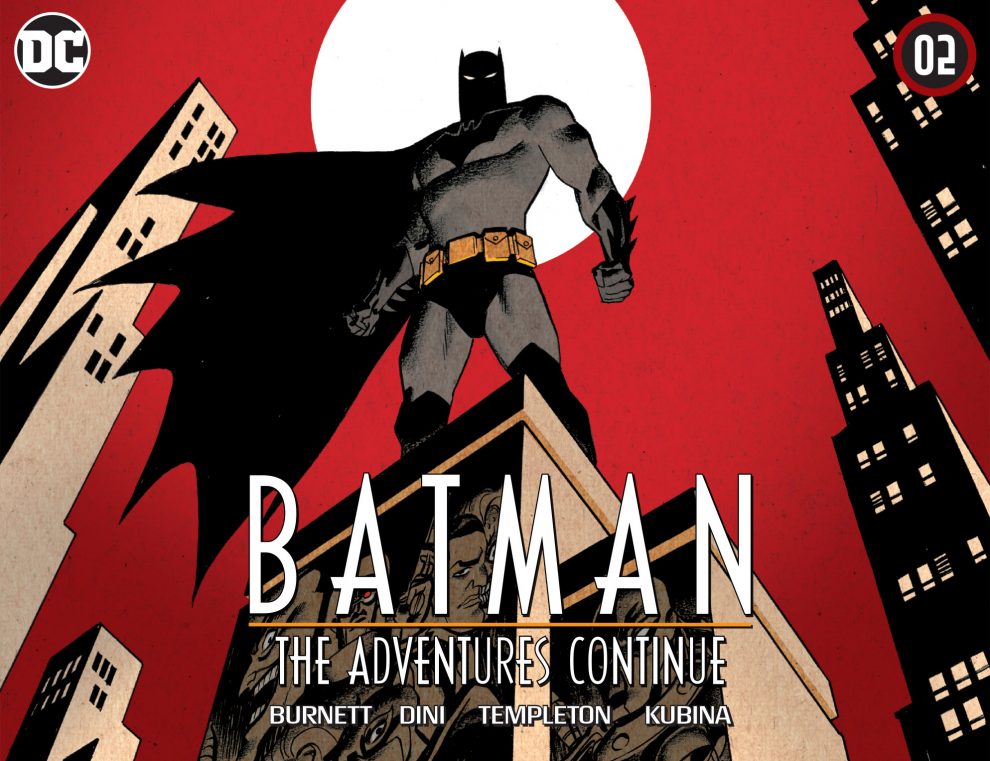 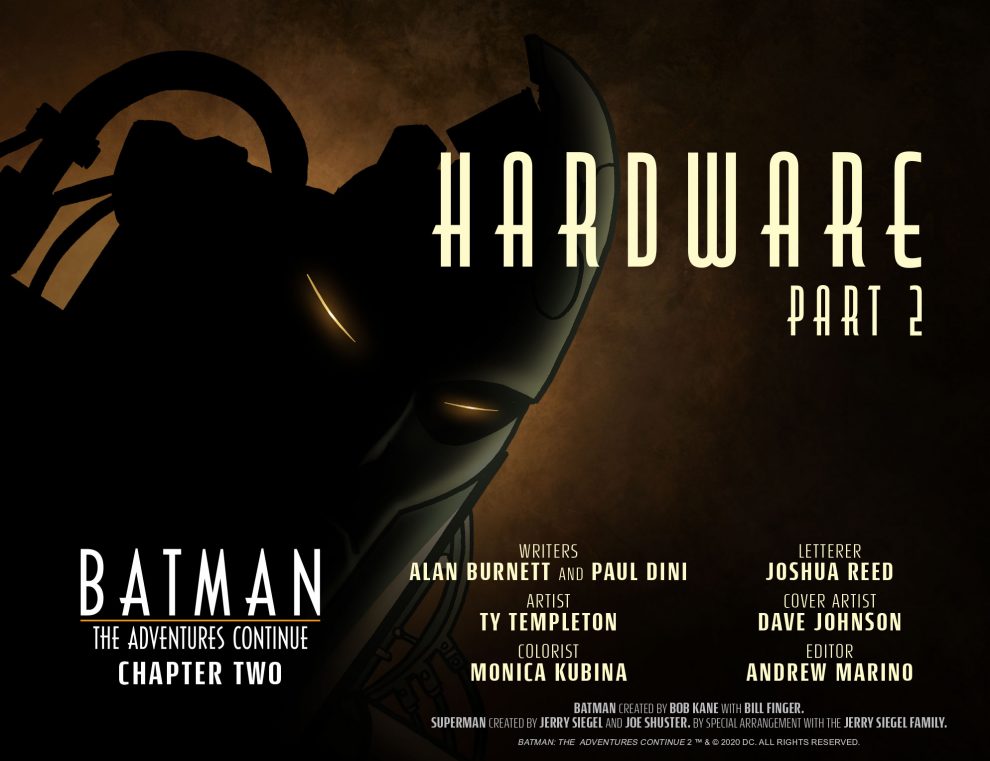 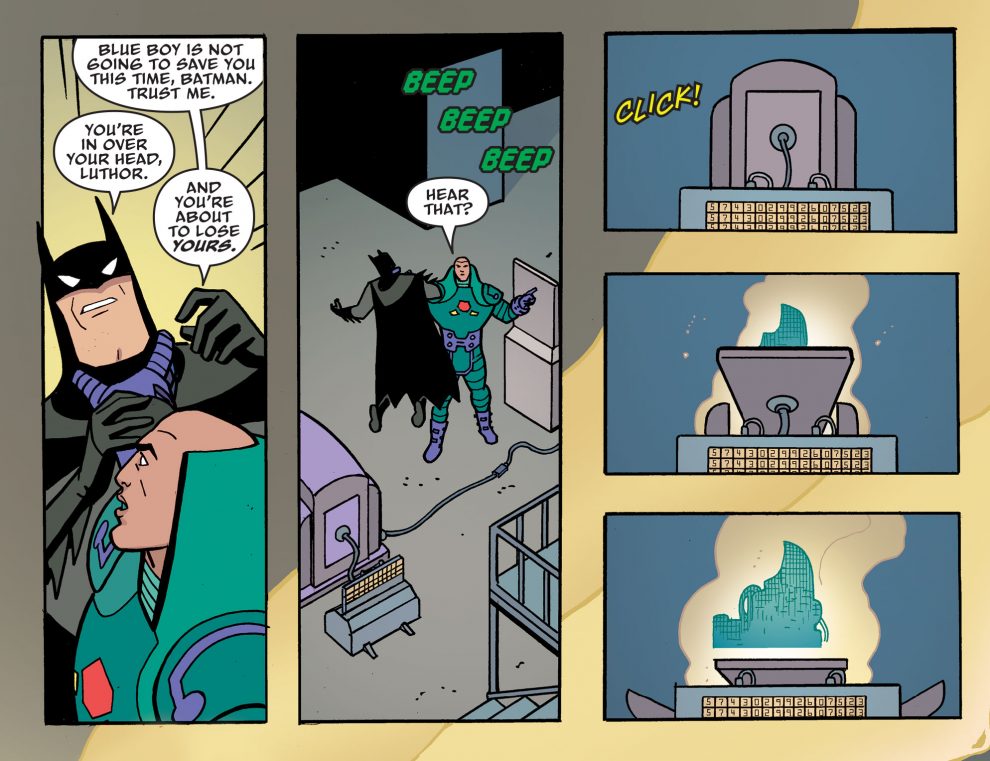 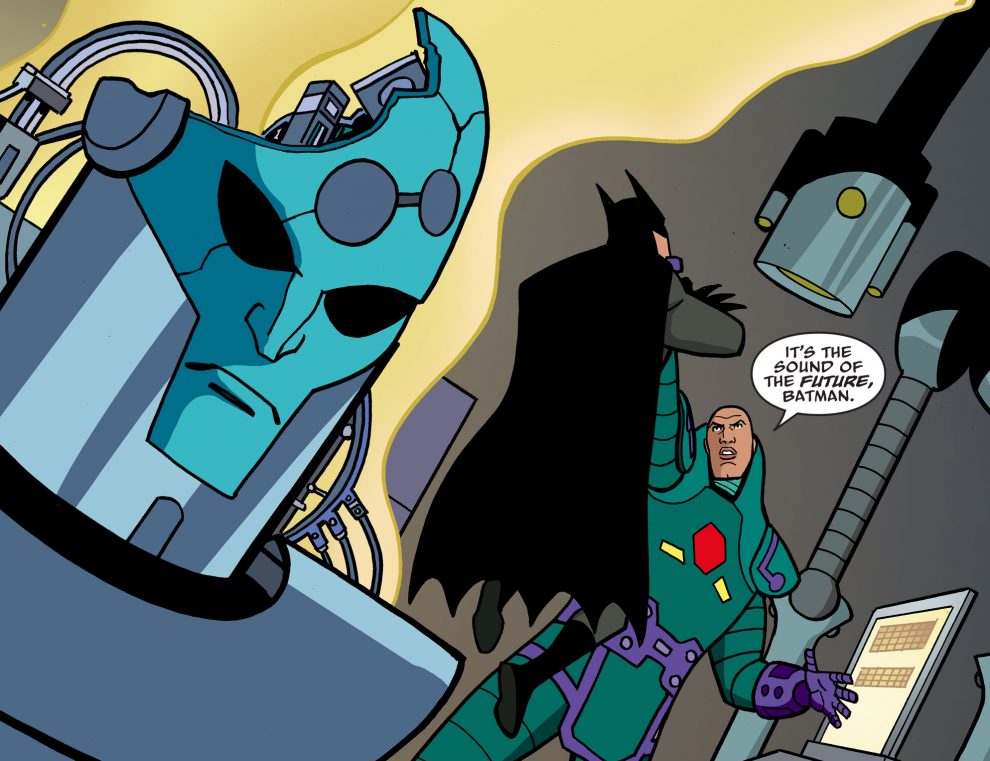 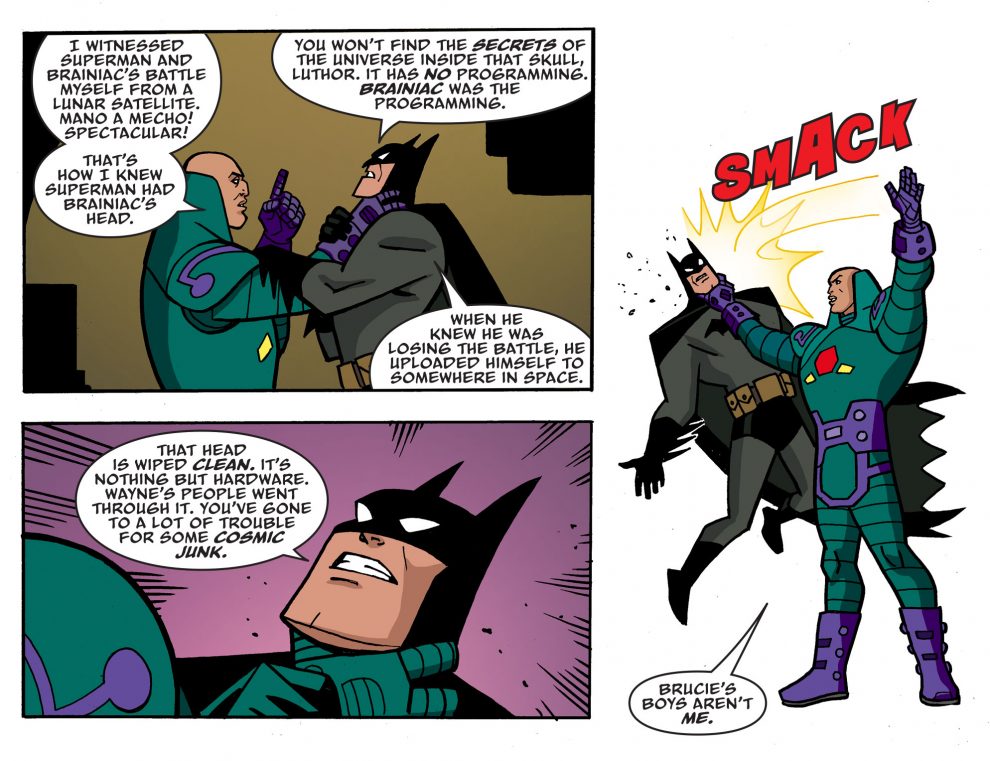 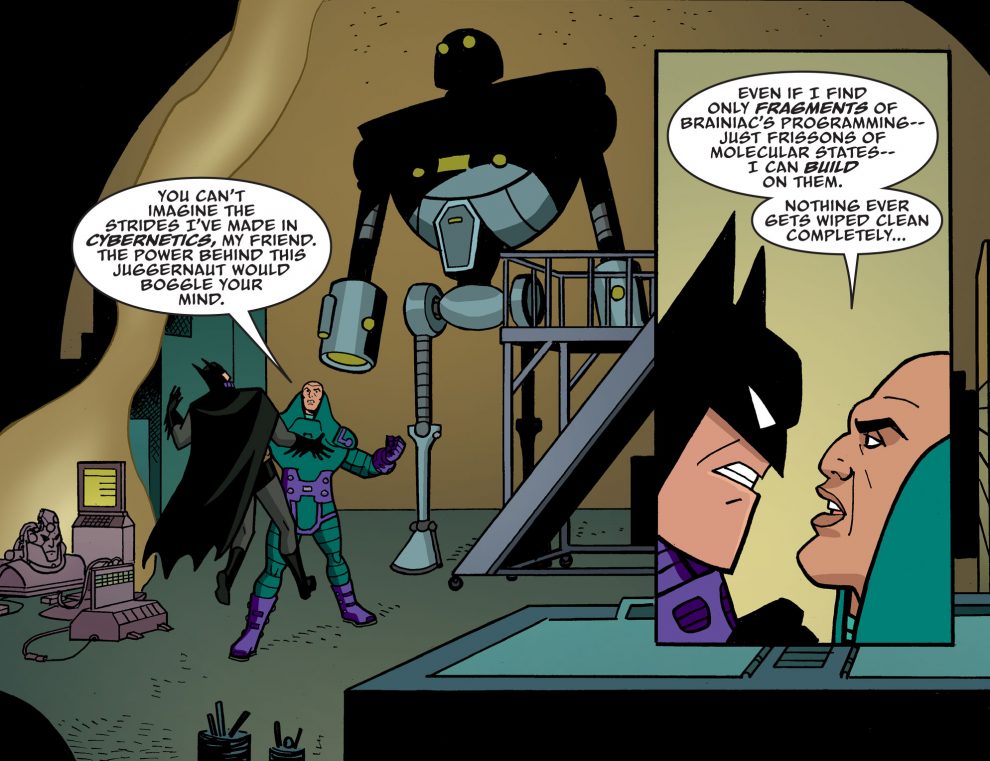 Yes, indeed. The art, colors and letters by Ty Templeton, Monica Kubina and Joshua Reed are all resplendent. We left Batman in Luthor’s vice-like grip, and that’s exactly where this chapter kicks off.
It’s amazing how art this deceptively simple can convey the pain on Batman’s face, and the malice on Luthor’s. Ty Templeton can convey so much emotion from the curl of a lip, a grimace, or a raised eyebrow.
Monica Kubina’s colors add so much to the finished pages. It would’ve been so easy to over-saturate the colors, making them cartoony and  cosmic, but what we actually get is subtle, and clever. The colors are bright enough to match the tone of the story, but not garish, or so over the top that they distract from the subtlety of the line art.
Josh Reed gets to cut loose this week too. There’s a ton of dialogue on these pages, but Reed also has some fun moments when Luthor SMACKS our hero around, and wait ’til you see (and hear) the lasers and robot battle scenes! This comic is so much fun!

Batman: The Adventures Continue #1.2 is a blast to read. There are twists, turns and surprises, startling reveals, and a cliffhanger that left me begging for more. If the final reveal wasn’t thrilling enough, the “Next Issue” caption left me salivating. Terrific. I really can’t wait to hold a physical copy, collecting chapters #1.1 and #1.2 in my hands.