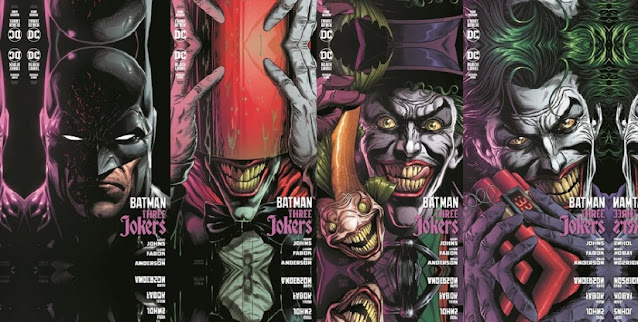 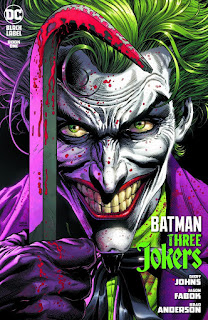 The wait is over, Batman: Three Jokers #1 is finally here!

The idea of there being three Jokers first reared it’s rictus grinned head five years ago, when Batman temporarily gained the powers of a New God, (in the pages of the New 52 run of Justice League  – issue #42 – 2015 – to be exact). It’s been teased further over the years, particularly since the DC Rebirth and Doomsday Clock – also written by Geoff Johns.

I read the book on Saturday, but have had to walk away from it, and re-read it a further two times to full wrap my head around it, just so that I could ensure delivering a better article. Usually, I like to post reviews for flagship titles and huge events on day of release, but I really wanted to do this properly. I hope that this review, like the book itself, was worth the wait.

The issue was totally not what I expected it to be, and that’s probably for the best. 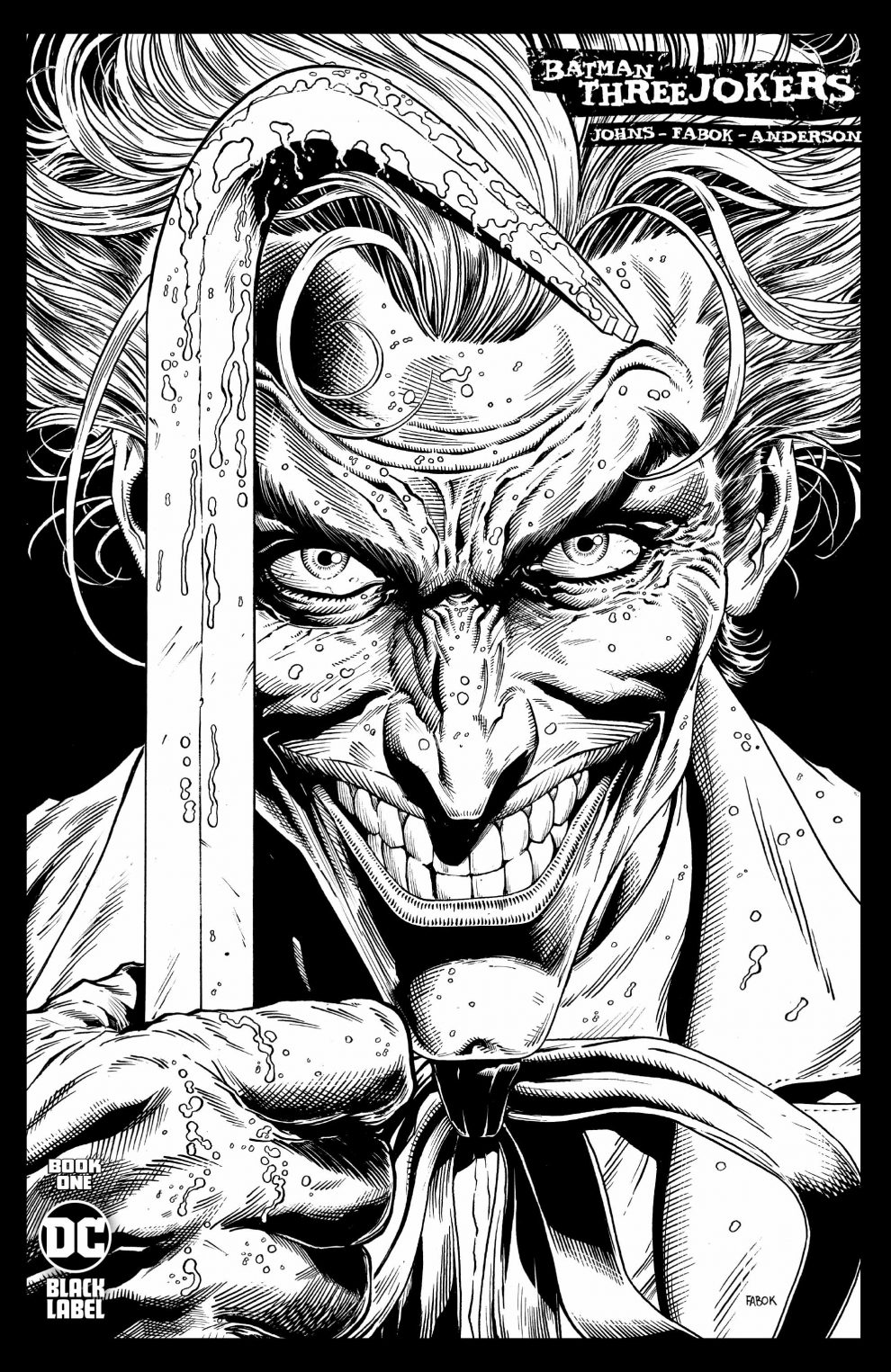 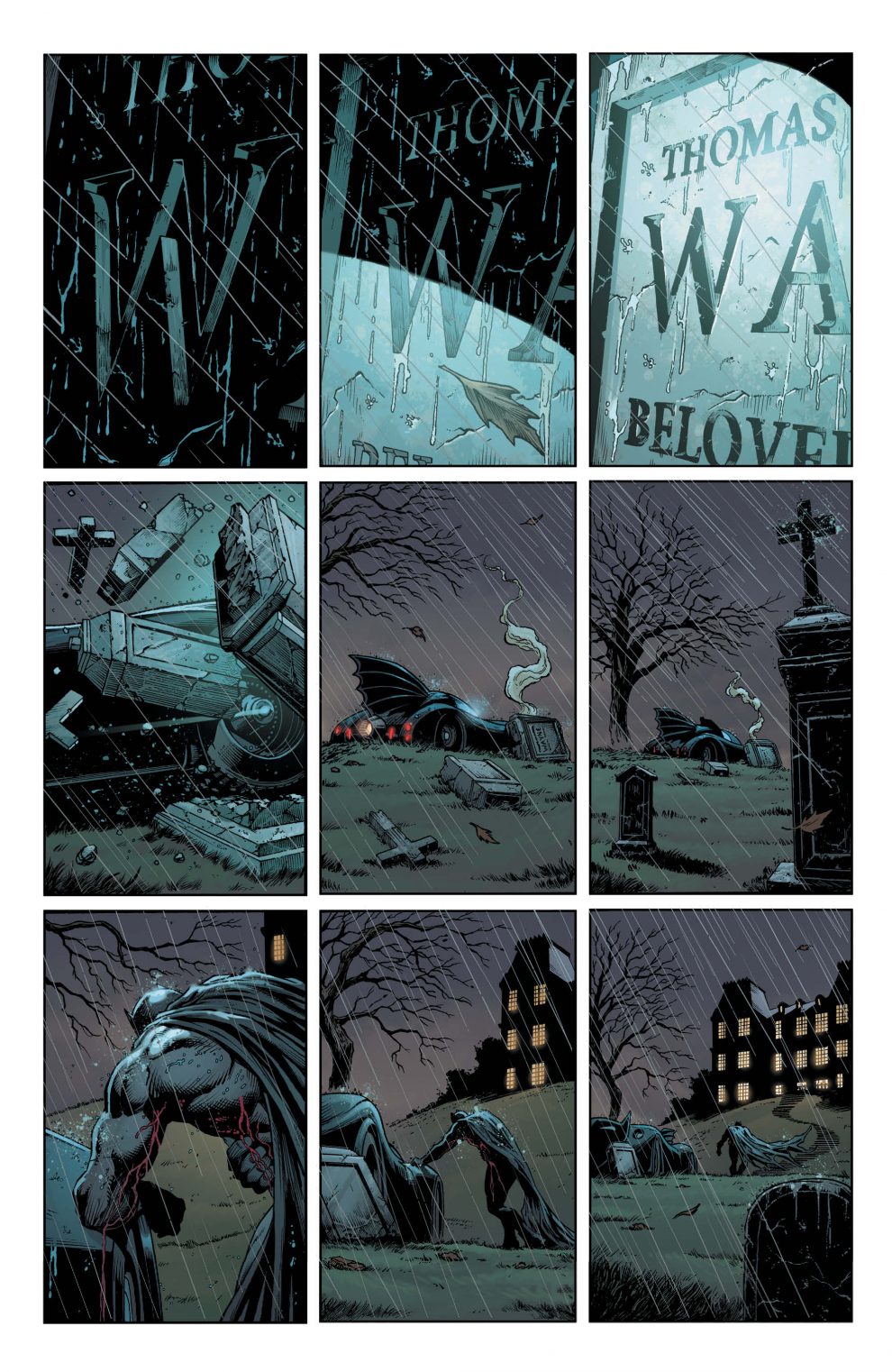 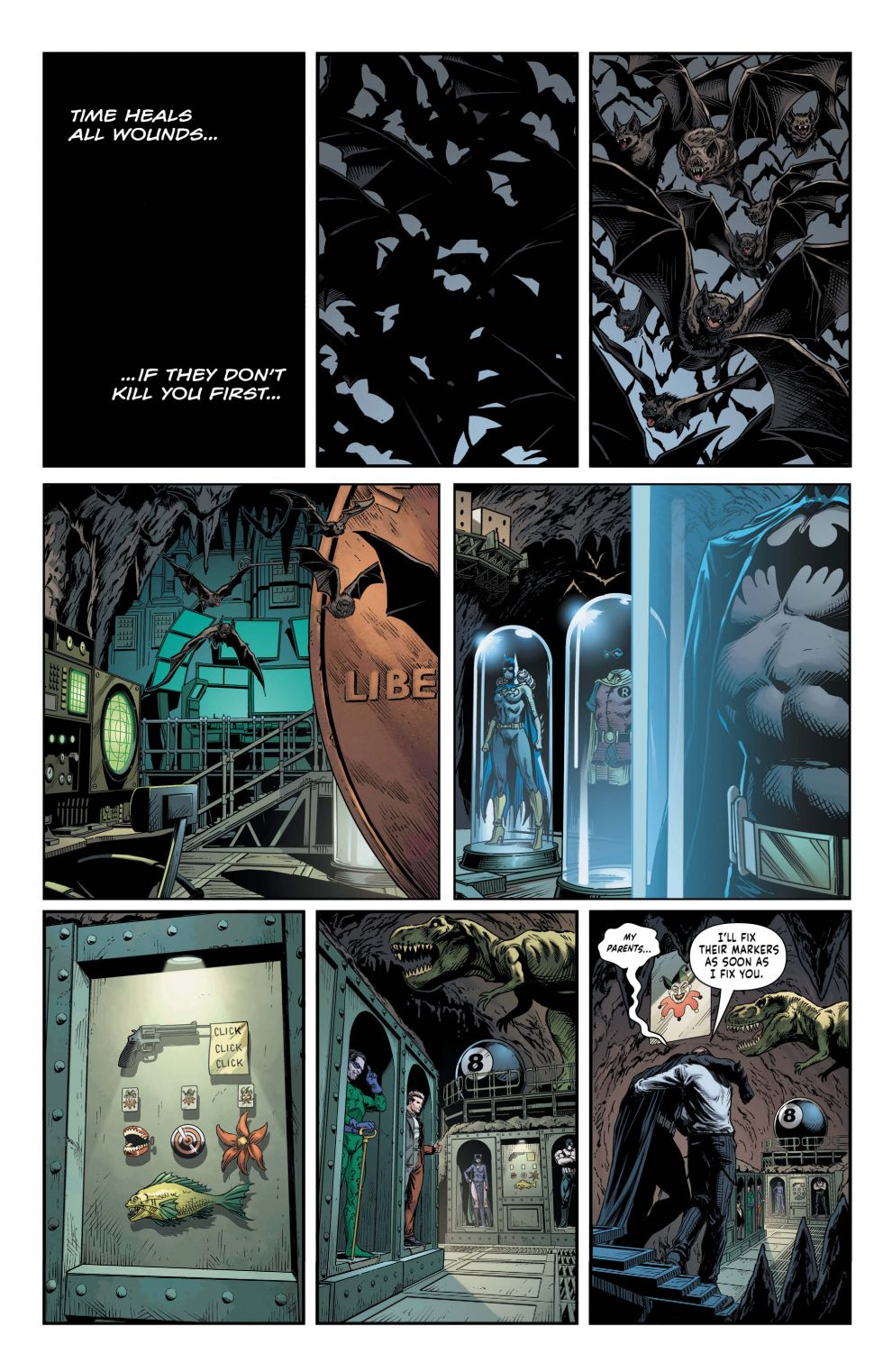 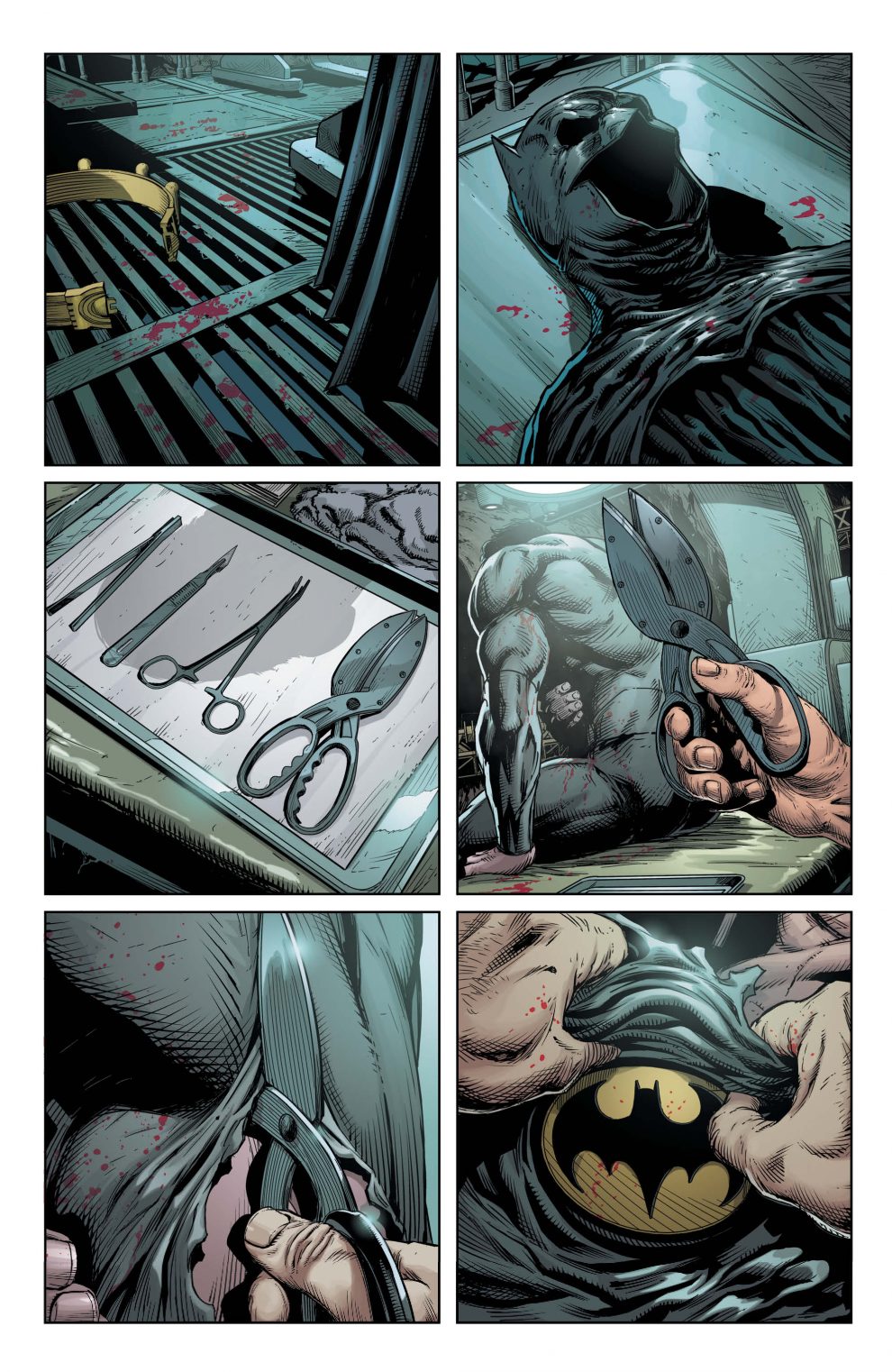 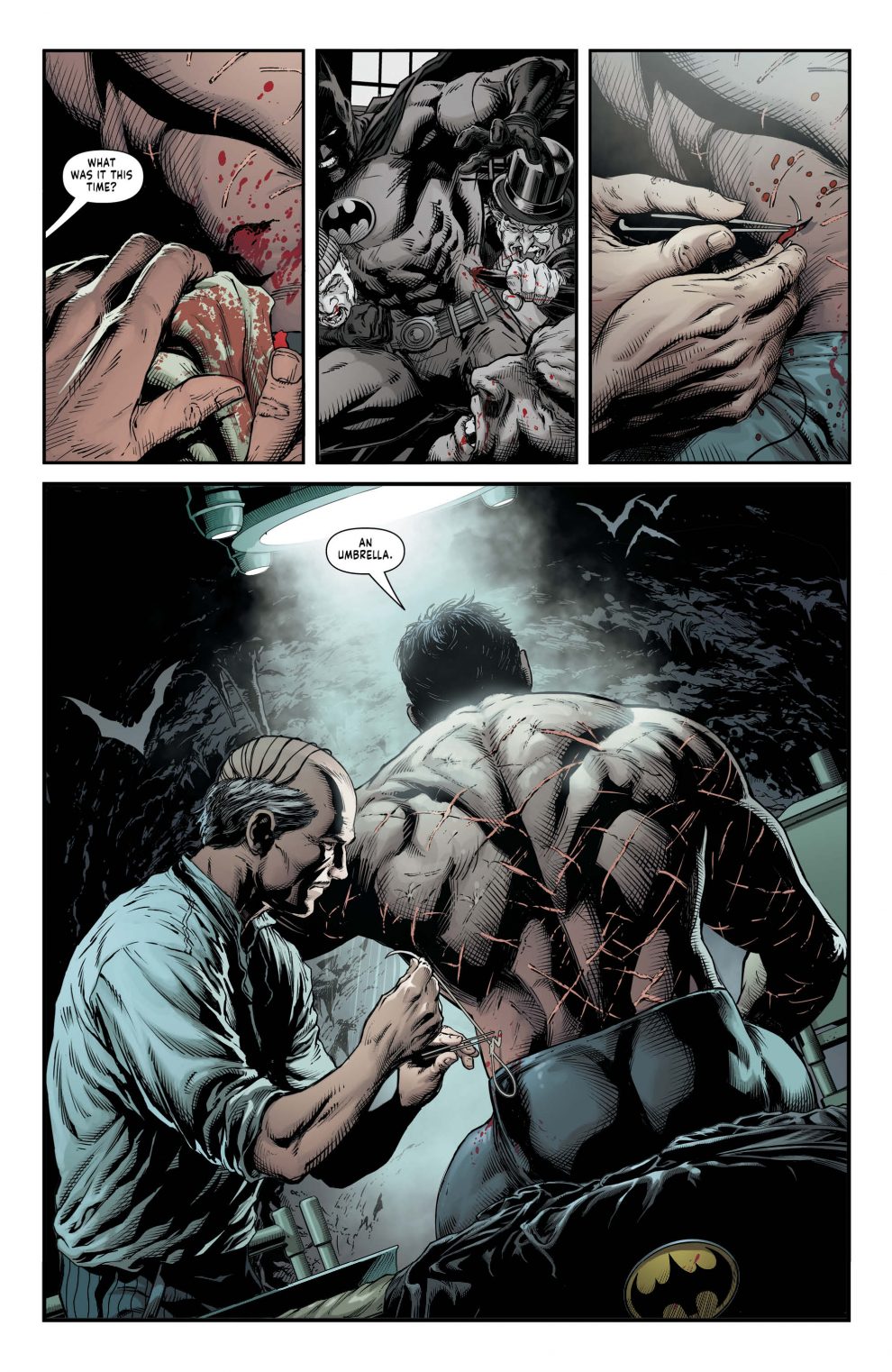 It’s clear to me that Geoff Johns loves comics, and that some of his favorites are also some of mine; the works of Alan Moore in particular. Johns’ Doomsday Clock was as much an homage to Moore as a sequel to the seminal Watchmen. Batman: Three Jokers is the same thing, but for The Killing Joke. While he’s no Alan Moore, Geoff Johns does give readers the same gut clenching sense of horror, and atmosphere, that the original writer did, as this issue brings back some of the feelings I remember experiencing when first reading, what many still feel to be the greatest standalone joker story of all time.

I’m not giving too much away by saying that we meet all three Clown Princes in this first issue, but Batman’s reaction, and the way Jason Todd and Barbara Gordon handle the news, is something readers need to experience for themselves.

In a recent interview, artist Jason Fabok spoke of his love for The Killing Joke, and revealed the personalities of the Three Jokers: The Criminal, the Clown, and the Comedian. These are all aspects of the character that have appeared in Batman comics since the character was introduced, way back in Batman #1 (1940).

The Golden Age version was a master criminal, who had a resurgence in the late 60s when Denny O’Neil, Neal Adams and others took the Dark Knight back to his grimy, gritty roots.

Due to censorship in the 50s, Joker was turned into a clown. A dangerous, deranged, and deadly one, but a clown nonetheless. Aspects of this personality have also resurfaced, depending on who was writing the story.

The Comedian, whom I feel is also a tribute to Moore’s Killing Joke (and to the Watchmen character who got the joke that is life), isn’t just a mix of the two others. This is the tortured, truly insane version of the character from the modern era. 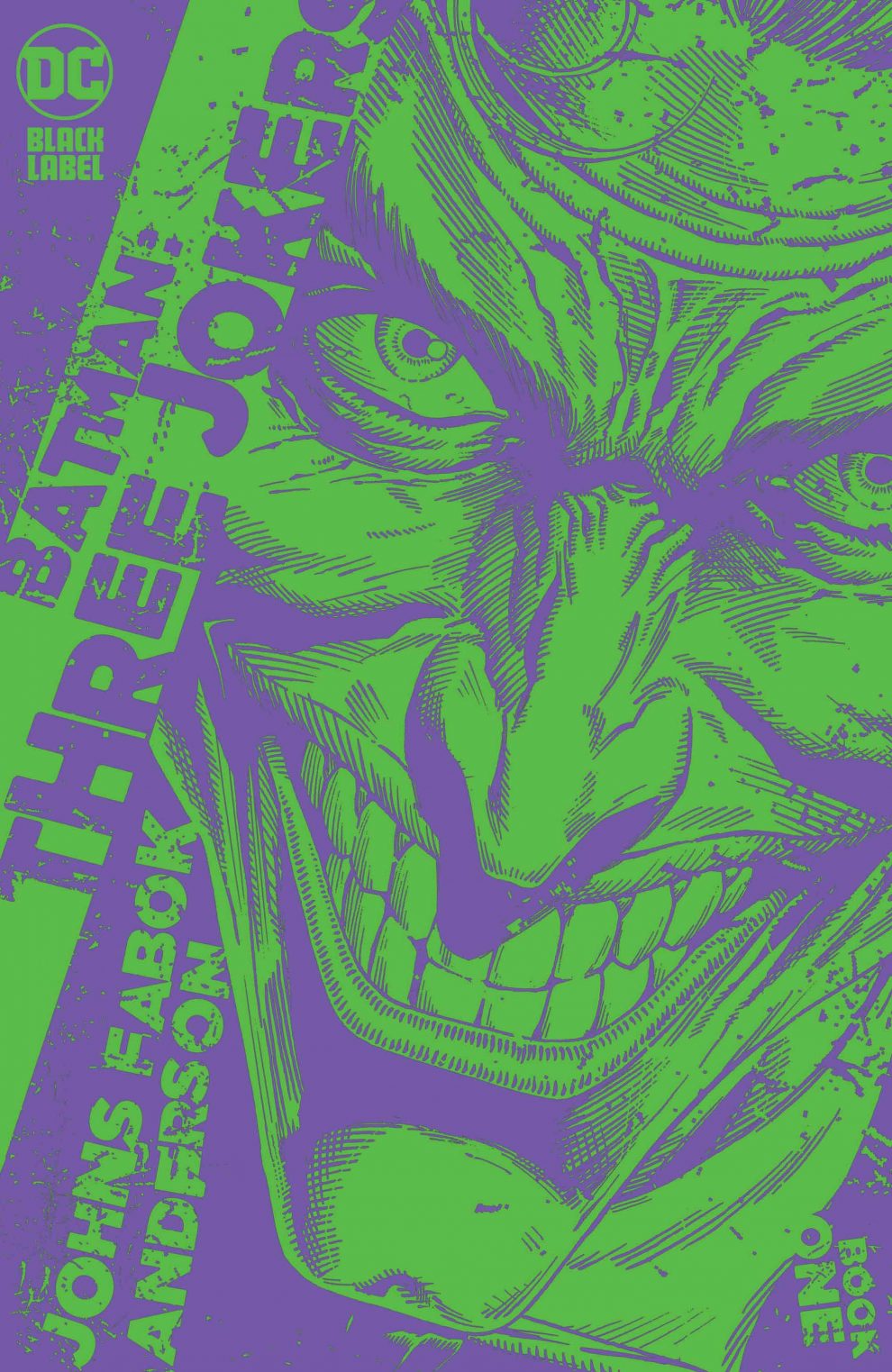 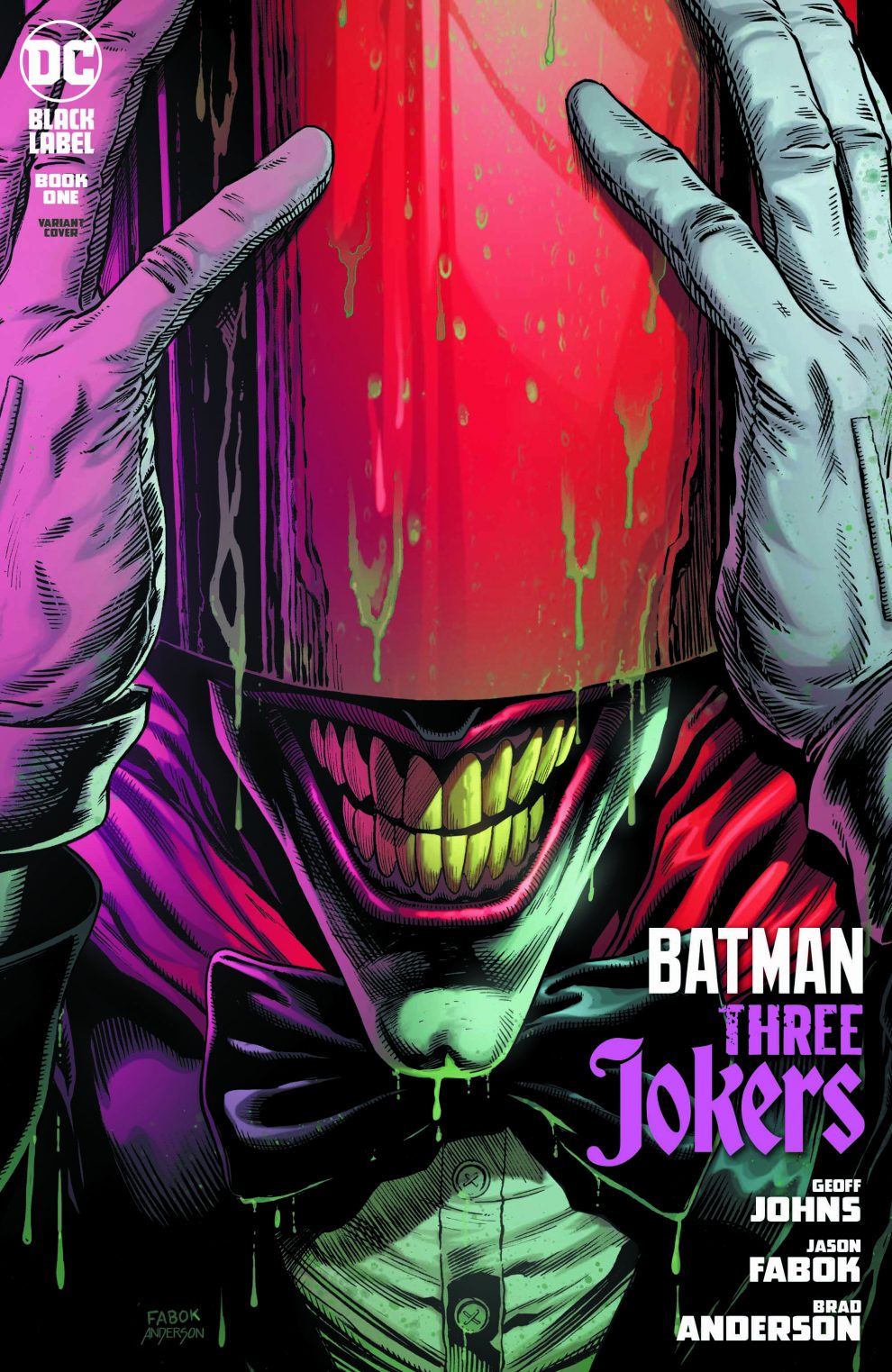 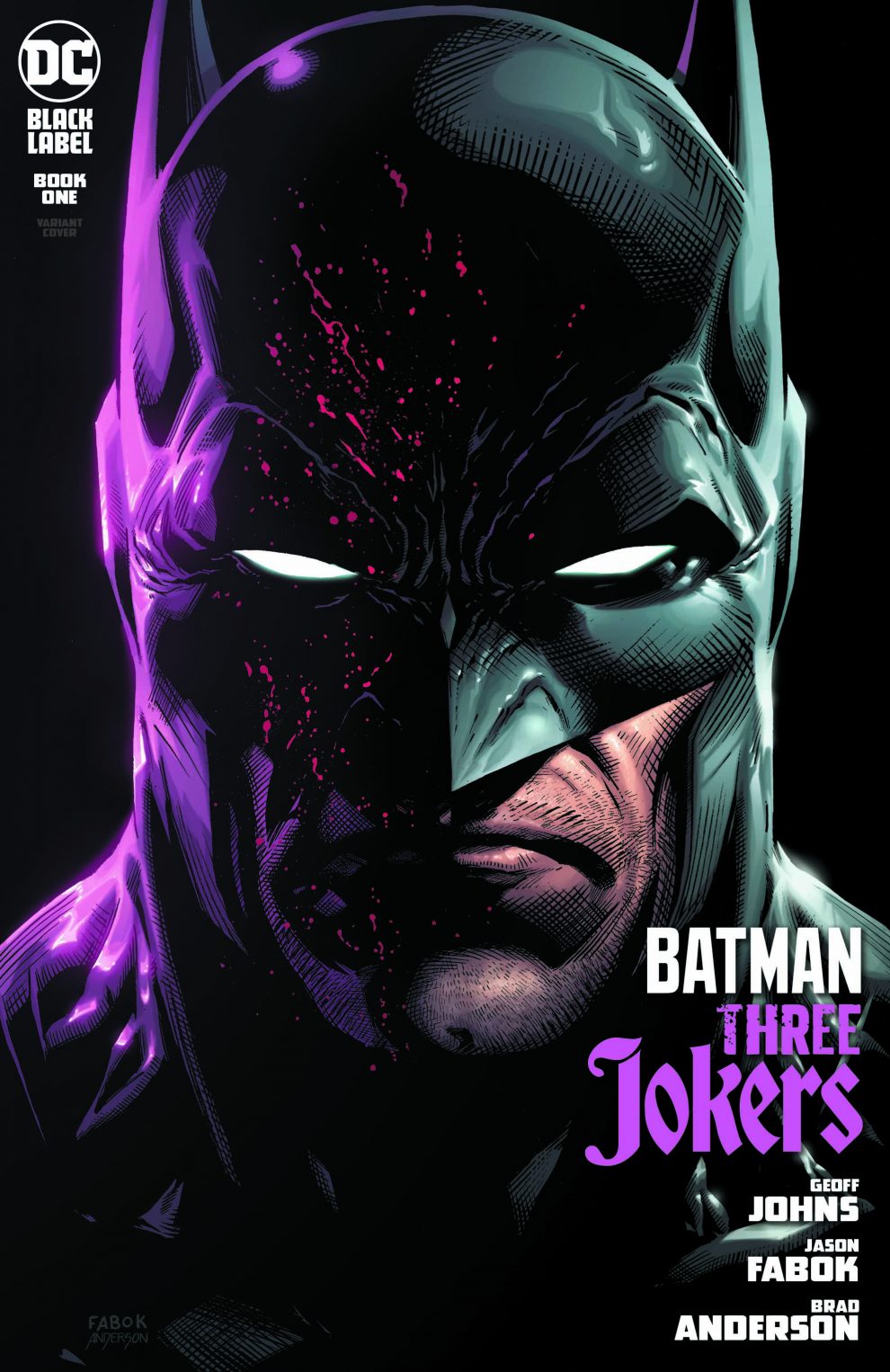 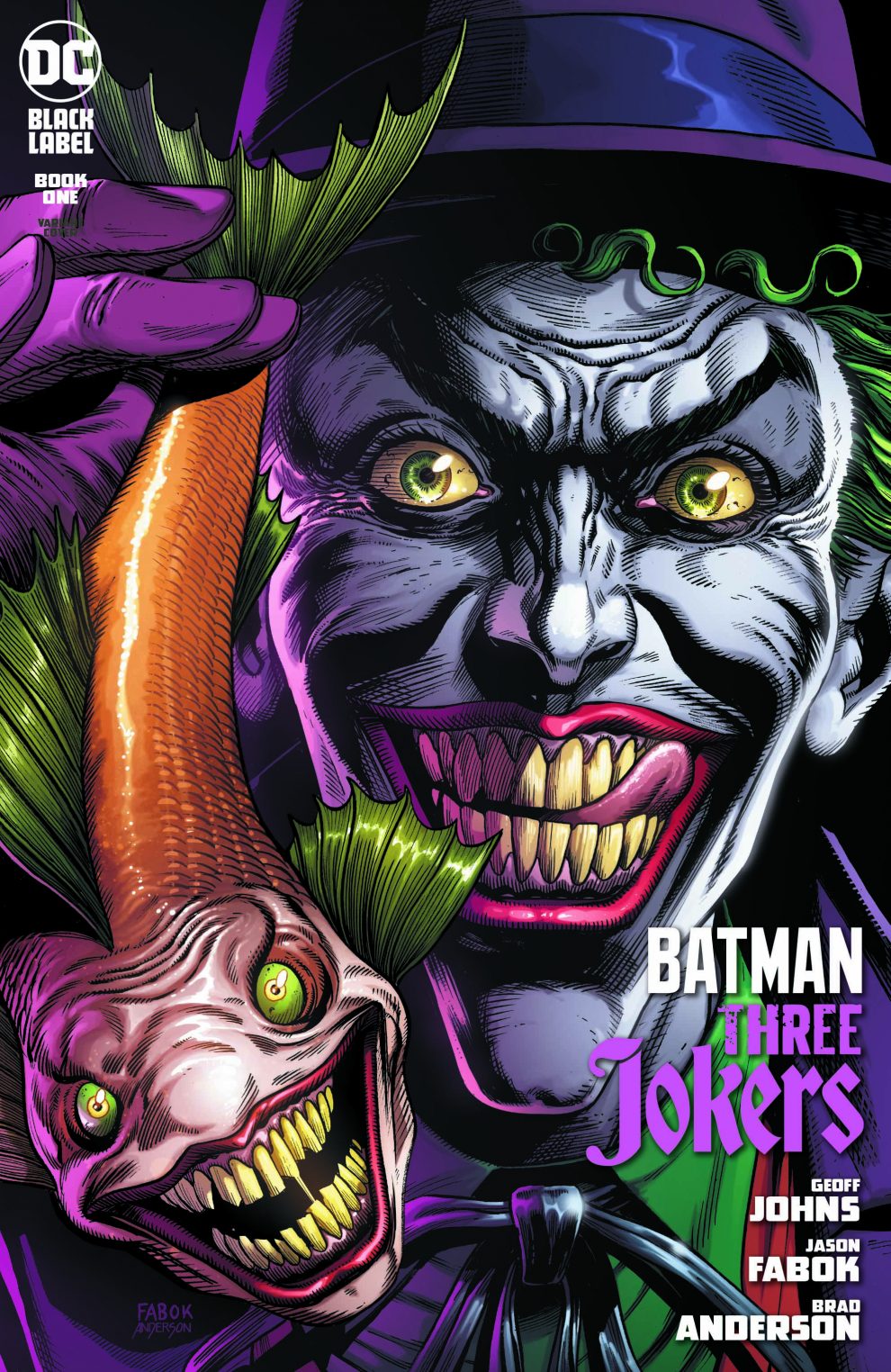 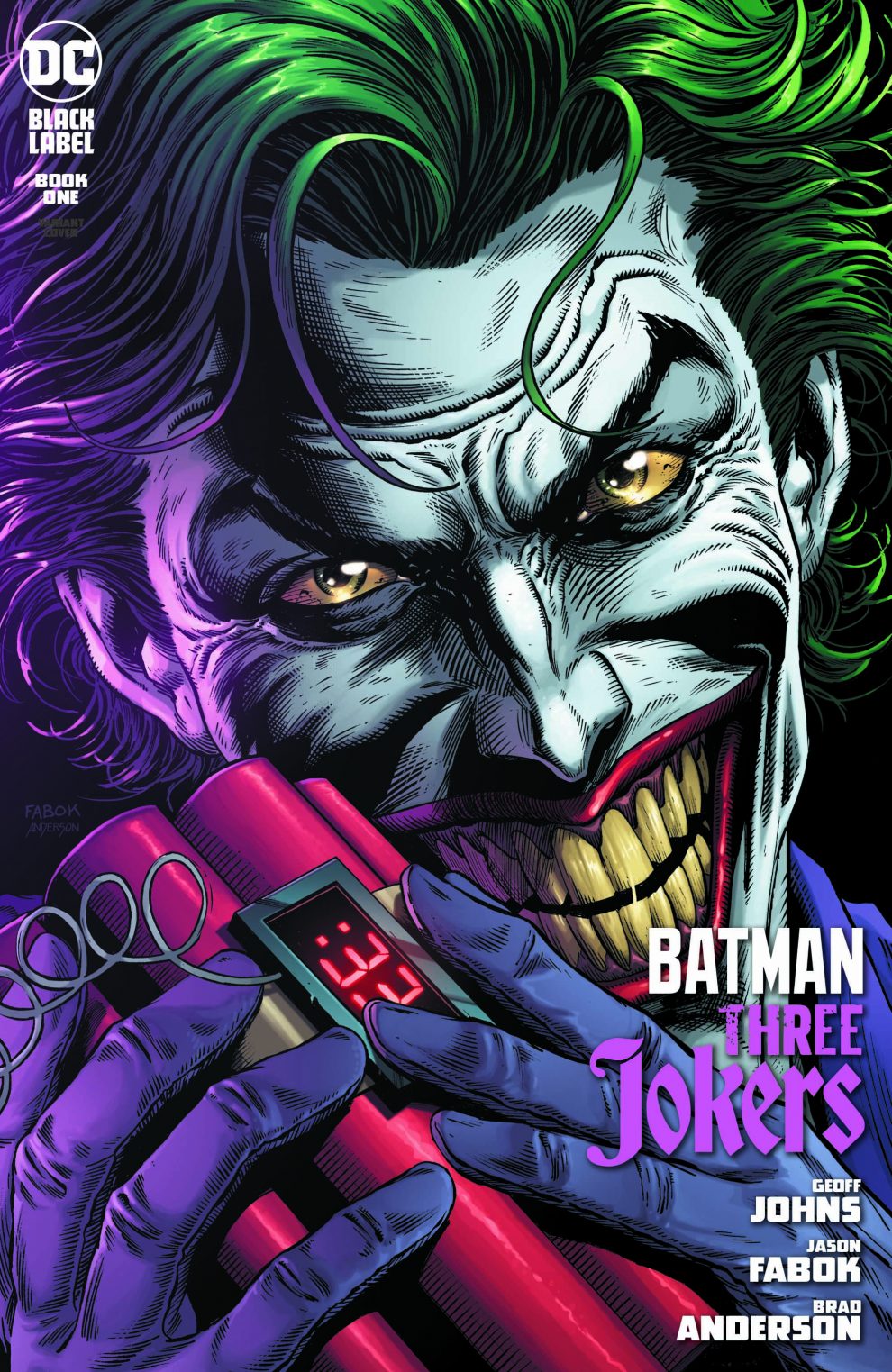 Portraits Of A Clown

Fabok draws all of them brilliantly. I’ve said that Geoff Johns is a great writer, but that he’s not Alan Moore; I revere Brian Bolland, he’s one of my heroes, but Jason Fabok’s art in this issue actually is at Bolland’s level, in my opinion. In fact, with two more issues still to come, I feel that he may even surpass it. Look at the images reproduced in this review. No, really… look at them.

I’ve been a Jason Fabok fan for years, but this could be the best work of his career to date.

The color art in the original Killing Joke has often inspired debate, and controversy. Many fans prefer the colors from the original printing, by John Higgins. Others prefer Brian Bolland’s version, from the 30th anniversary, and deluxe editions. One thing that I can state categorically about Batman: Three Jokers #1, is that Brad Anderson’s work is absolute perfection. There are many great color artists working in comics today, but for me Brad Anderson is in the top three – not just for DC, but in all of comics. I’ve been going gaga for his art for years, but – like Jason Fabok – he just keeps getting better and better.

Batman knew about the three Jokers. Jason and Barbara didn’t. Jim Gordon and GCPD didn’t. Will this information come to light? My mind was blown by this issue, as were those of every single character… the Clown in particular. From showing us how Batman, Red Hood, and Batgirl got their scars – both physical and emotional – to seeing Jason and Babs cut loose, every line and every page in this comic resonated with me. Letter Rob Leigh even took me back in time, with sound effects and laughter reminiscent of those from the golden, silver and bronze ages. Every creative talent working on this book delivered truly beautiful work.

The big question though, is when is this story set? We have Jim Gordon as Commissioner (again?), Alfred’s alive, and our heroes’ costumes don’t match what they’re wearing in their own titles.

I can’t wait to see what happens in book two!