Review: Doctor Who: A Tale Of Two Time Lords Vol. 1: “A Little Help From My Friends” 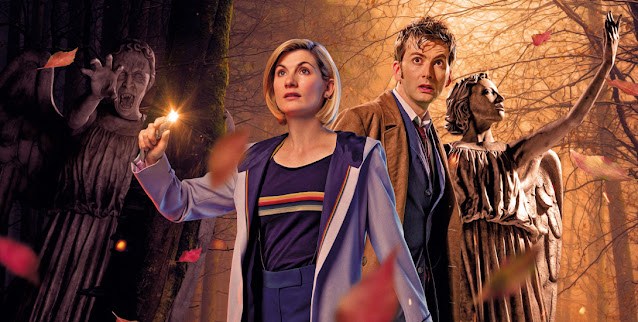 Doctor Who: A Tale of Two Time Lords Vol. 1: “A Little Help From My Friends”

Doctor Who: A Tale of Two Time Lords Vol. 1: “A Little Help From My Friends” is a lovely trade paperback, which collects Doctor Who: The Thirteenth Doctor #2.1-4. This new story doesn’t just feature the Doctor’s 13th incarnation, as played by Jodie Whittaker… oh, no! This is also a team-up with the 10th Doctor, as played by fan-favorite David Tennant!

If anyone has access to the classic episode “Blink” which features Ten and Martha Jones being blasted back to 1969 by the Weeping Angels, I heartily recommend watching that before tucking into this comic. If you’ve ever wondered just what went on in 60s London while Sally Sparrow saved the day, and before she returned the Doctor and his companion back to the present, this story has all the answers.

Don’t panic if you can’t watch it, though, as this book stands up all by itself, and tells a terrific story all its own.

The brilliant Jody Houser has outdone herself; she’s written some quirky, but completely real dialogue, with each and every character sounding exactly like they do on TV. There’s a serious threat, great humor and a ton of action… with a little bit of social commentary thrown in for good measure. Outstanding writing, but what else would you expect from an Eisner nominated talent, who’s written comics for Marvel, DC, and Star Wars.

Roberta Ingranata and Enrica Angiolini have been producing some stellar art on this series since its inception, and – if you can believe it –  they’re actually getting better. Not only have they captured 13, Ryan, Yaz and Graham accurately, their versions of 10 and Martha are also, well… picture perfect.

Roberta Ingranata’s work in this book makes me smile. I’ve been reading Doctor Who comics for well over forty years, and hers are some of the best looking ever. Of course, the wonderful colors by Enrica Angiolini and Shari Chankamma help. Look at the art attached to see what I’m talking about.

The great use of light and shadow in the stairwell scene, particularly when compared to the natural daylight pages that follow, works brilliantly. It’s lovely seeing the line and color artists really making each other’s work truly shine. Look below at how every leaf is drawn, and how every shadow of every leaf is colored on the characters faces. Was this necessary? No. Does it look great and add so much more depth to the scene? Hell, yes!

I also love the way that Roberta’s use of body language conveys so much emotion. The way she captures both Doctor’s mannerisms, is so endearing… and so Jodie Whittaker/David Tennant.

I think that there’s a little too much empty space on a few pages, but what does fill the panels is gorgeous. Some pages have way too much negative white space between, above and below panels. I far prefer full page art over the stark, clinically laid out ones with big, white borders… but that’s just personal taste.

Nope, no real criticisms. Ever letter is lovingly rendered, the art is gorgeous and the script is a delight. I don’t know if Richard Starkings or Sarah Hedrick are old-school Doctor Who fans, but lettering the “What?” when spoken by both Doctors onto the page must have raised a chuckle if they are. My favorite line from the book comes when 10 sees 13’s TARDIS, spots that it’s different to his and he says “I don’t like it.”

I AM an old-school Doctor Who fan, and this line was first uttered by Patrick Troughton’s second Doctor, way back in 1972/73’s “The Three Doctors” commenting on the third Doctor’s TARDIS. He said it again in “The Five Doctors” (1983), and many times since. Both David Tennant’s 10th Doctor and Matt Smith’s 11th have uttered those famous lines too.

I’m jealous of Richard and Sarah, as they got to read this wonderful Jody Houser dialogue and place it in the mouths of these legendary characters. Lucky devils…

Two Doctors, four companions and one of the greatest monsters from the show’s modern era, not to mention a classic baddie return, too...what’s not to love? With Doctor Who: A Tale of Two Time Lords Vol. 1 the Doctor has triumphantly come bursting back into our lives, hearts, and comic-shops.

I am one happy Whovian.