Fan Retrospectives: Vision: Part 3: In and Out 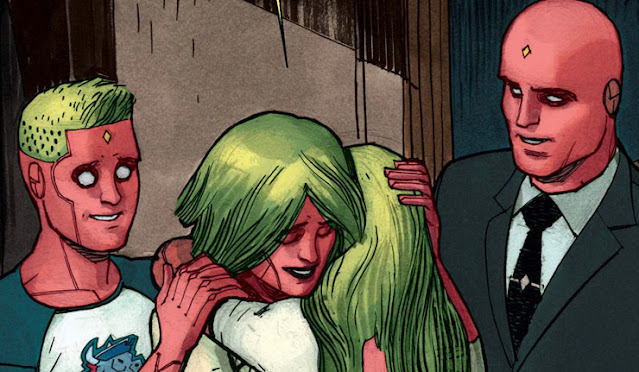 Writer Tom King and artist Gabriel Hernandez Walta created a strange premise for the old-school Avenger Vision. They gave him a family. On paper, Vision with family hijinks sounds ridiculous and cheesy. But instead it turned out to be a haunting, character-defining master class on comic storytelling. Let's break down 2015's Vision series.

We open the third chapter of Vision with the family being in a precarious place. Viv is still physically incapacitated from the supervillain Grim Reaper's attack. Virginia accidentally killed the Reaper and now a neighbor who witnessed burying the body is blackmailing her. And Vin came dangerously close to hurting a fellow student.

Now we open with some punk kids spray-painting some slurs on the Visions' garage door. Virginia quickly, if violently, dispatches them. Amusingly, writer Tom King abruptly cuts the scene off, so we don't really know what is the fate of the kids. 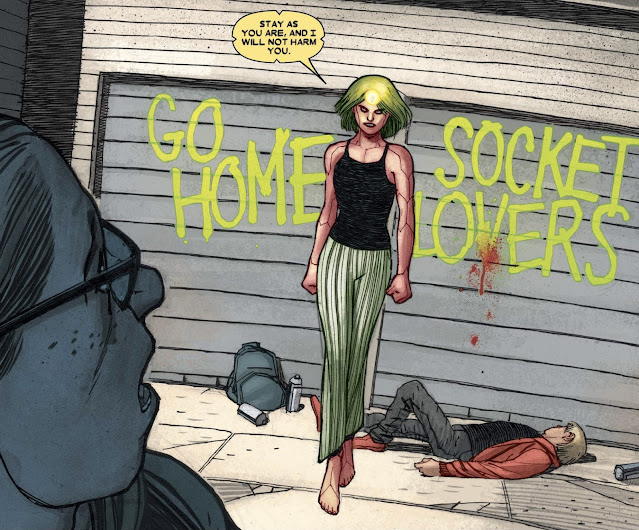 It's a popular horror storytelling method: leaving things ambiguous to make it scarier in the viewers' minds. For people like me who have phobias of super-strong robots potentially mutilating soft, squishy humans- truncating the scene has horrifying implications.

The Everbloom and Virginia 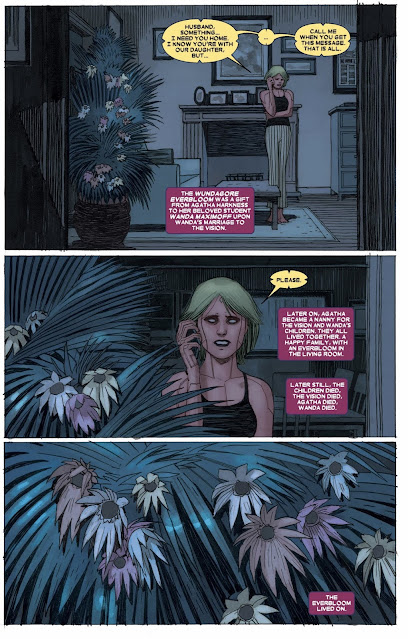 Elsewhere, we see Vision with Tony Stark trying to revive his malfunctioning daughter Viv. There is a hidden character joke where Vision  subtly mimics human behavior that he's observed from his Avengers cohorts.

When Vision explains what happened to his daughter in a dry, long-winded way, Stark sarcastically replies, "Obviously".

Later in the conversation, Stark jokes that if he gets in trouble for helping, he'll just blame it on Vision turning evil. To which Vision replies, "Obviously". 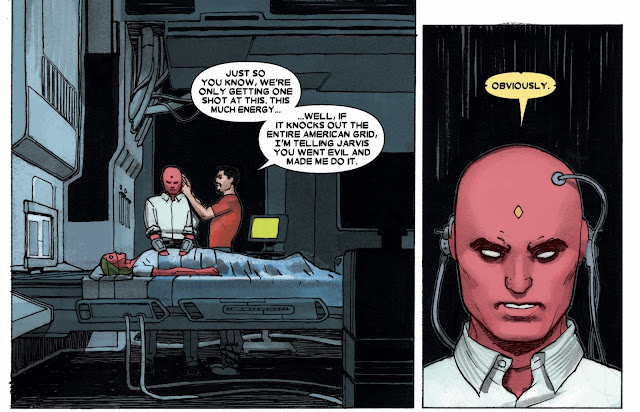 This is another example of sampling, where Vision took a phrase or a word and recontextualizes it in a different conversation. Here, Vision takes the word "Obviously" and twists the meaning. It is something that is both a very human and a very robot thing to do. This duality of Vision's robotic nature and human behaviors have been at the center of the character's struggle since his inception. King summed it all up in one exchange.

Another great example of this internal conflict is how Vision acts very droll listing off the reasons for Viv's malfunction with the effect of someone reading about the weather. However, once Stark and him pump power into Viv to revive her, Vision's mood shifts to borderline-manic, to the point where he straight-up threatens to kill Stark if he stops the process prematurely.

This human versus robot internal conflict and duality that Vision struggles drive the entire story. It starts out small but escalates as more pressure is mounted on the Vision

When asked how the revival process went, Stark says, "Fine. Normal, I mean. Everything was normal."

Stark's correction to say, "Normal" implies that he implicitly understands Vision's desire to be human or normal. Vision threatened him in order to save Viv. It's a human action. It may not be objectively "good" or "fine", but can be summed up as a "normal" human reaction to the situation.

So Vision returns home with a revived Viv and the rest of the family has a happy reunion. Later that night, Vision and Virginia consummate, a sign of their love. We see their shadows through the window in the same shot as the Visions' vandalized garage door smeared with the blood of the boy Virginia assaulted in the beginning of the issue. 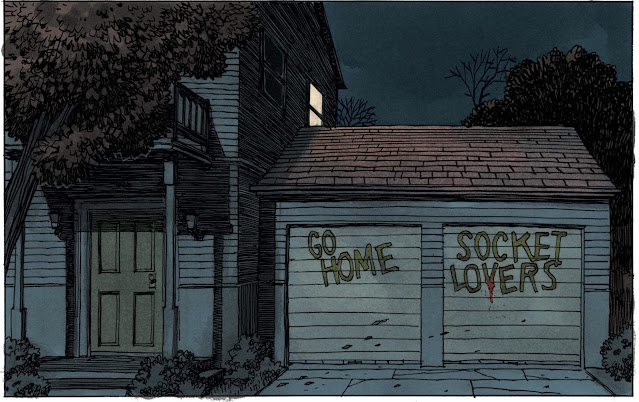 The visual juxtaposition of sex and blood shows Virginia's potential to be simultaneously loving and violent. This is another theme that will persist with the rest of the series.

We finally see a flashback sequence of the Everbloom plant with Agatha Harkness of "Agatha All Along" fame. However in comics canon, Agatha is Wanda's den mother and mentor of her magical powers.

King narrates a very detailed back story of the Everbloom. This intricate narration serves as two-fold. One, it lulls readers into a sense of security again when we hear mundane details before shocking us. Two, it also has hidden exposition of how the Everbloom works, which will become more important as the scene progresses. 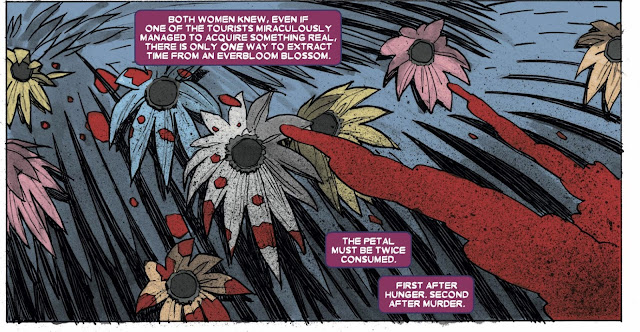 Agatha feeds her cat Ebony the Everbloom leaf, because according to the narration, the Everbloom can grant someone precognitive powers. But first it must be ingested and then another person must murder the individual and ingest that same leaf again.

So what follows is the most grotesque sequence in the series. Agatha kills Ebony and eats his stomach. She then convulses on the ground and has a vision of the Avengers, X-Men, and Fantastic Four dead at Vision's feet. Then- as if she is possessed-Agatha starts reciting the opening lines of the series. 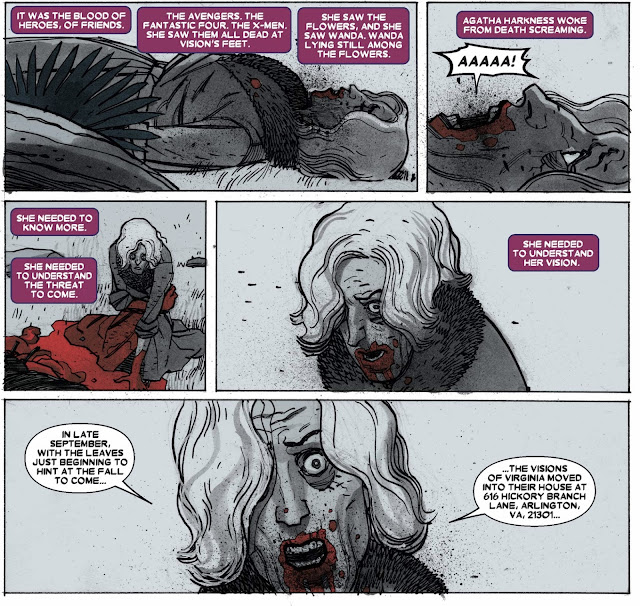 With that scene, we discover that our mysterious omnipotent narrator was Agatha all along. Now the mystery is, to whom is she talking?

This chapter is so dense with thematic underpinnings, much like all of Vision's issues. However, the difference is there is some answers are starting to be revealed. King uses Agatha to great effect where initially we don't know how her story relates to Vision's main story and then we see it collide.
Another masterful work by Tom King and artist Gabriel Hernandez Walta.
Images May Be Subject To Cpyright
Avengers Eric Lee Fan Retrospectives gabriel hernandez walta Marvel Tom King vision