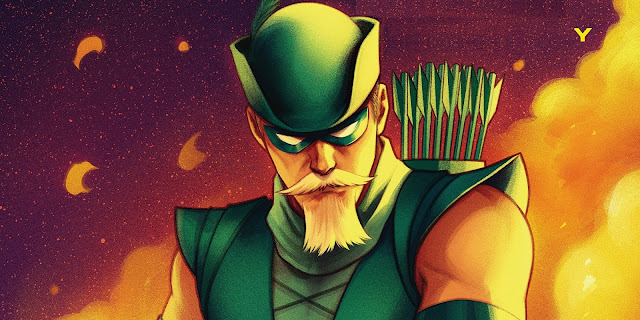 Legendary characters deserve respect and recognition when a milestone is reached. Batman and Superman had grand celebrations for their 80th anniversaries, and now the Emerald Archer is finally receiving the same treatment.

Larry O’Neil Celebrates the Legacy of His Father, Comics Icon Denny O’Neil, With A Silent Tribute

On June 29, join DC in celebrating eight decades of emerald-clad swashbuckling, crime-fighting, and trick arrows of every kind when the Green Arrow 80th Anniversary 100-Page Super Spectacular #1! Honoring Green Arrow and his allies across his 80-year history, from the Golden Age to now, the anniversary special includes 12 stories from some of DC’s most esteemed writers and artists who have contributed to the legacy of Oliver Queen. The title will also include 8-decade variant covers depicting the Emerald Archer through the ages.

This anthology not only features a “who’s – who” of comic book storytellers but also includes a unique and heartfelt tribute to the career of iconic DC and Green Arrow scribe Denny O’Neil. “Tap, Tap, Tap” is a silent, wordless story from Denny O’Neil’s son Larry, Jorge Fornes (Rorschach), and Dave Stewart (Superman). The story chronicles the challenges and victories in Denny’s life both in and out of comics, from his childhood, raising a family, his stellar career as a writer, until his passing in 2020. 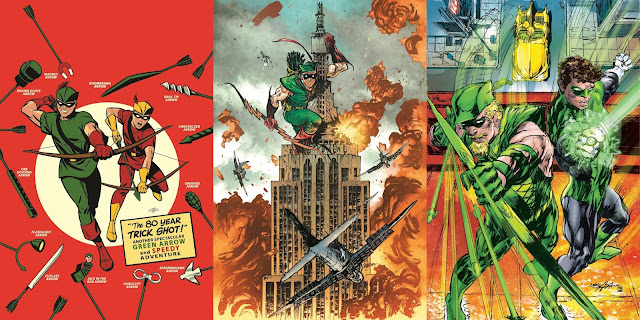 It’s the Golden Age of Green Arrow and Speedy, brought to humorous and loving life by New York Times bestselling writer Mariko Tamaki (Harley Quinn: Breaking Glass) and acclaimed artist Javier Rodriguez (Batgirl: Year One). A lot of people attempt to affectionately show the silliness of the first age of super heroes, but few have done it as exceptionally as Mariko and Javier. Trick arrows for everyone!

To become a more adept superhero and fighter, Green Arrow goes to train with the Golden Age superhero Wildcat at his gym. In true Wildcat fashion, he shows Ollie the hard way of what it takes to be your own hero. Tom Taylor (Nightwing, Suicide Squad, Injustice) brings this story to life, with incredible artwork from Nicola Scott (Wonder Woman 75th Anniversary Special) and Annette Kwok (Joker/Harley: Criminal Sanity).

“Who Watches the Watchtower?”

The Green Arrow is left behind on the Justice League Satellite while the rest of the team goes on an important mission. Oliver is less than thrilled, and righteously indignant about the situation as usual until an alien armada invades the Satellite. Can Ollie stand alone against an alien onslaught before it reaches earth? Acclaimed writer Stephanie Phillips (Harley Quinn) captures that “Denny O’Neil Green Arrow”-voice, and this story is brought to life in gorgeous fashion by Christopher Mooneyham’s (Nightwing) retro/modern bronze age aesthetic.

“Out of the Shadows”

Written and Art by Mike Grell, Colors by Lovern Kindzerski

Legendary Green Arrow writer and artist Mike Grell return to the 1980’s era of The Longbow Hunters. The Green Arrow must team up with the legendary anti-hero Shado to stop a shipment of smuggled guns from making it into Seattle. Depicting The Emerald Archer as only he can, Grell will remind readers why his take on Ollie Queen is still a Green standard.

“The Arrow and the Song”

This tale is a beautiful meditation on the love between Green Arrow and Black Canary through the years and the found family that they’ve created. Writer Ram V (Catwoman) puts together this beautiful story of love and how life takes turns you don’t expect. Gloriously brought to life by the work of Christopher Mitten (Batman: Arkham Unhinged) and Ivan Plascencia (The Flash).

We go right back to the mid-90s with this story. Oliver Queen is dead. Connor Hawke is Green Arrow and he has to save the main Queen Industries building in Star City, the home of a business and family he was never part of, from a group of terrorists. Brought to you by Infinite Frontier and Future State writer Brandon Thomas (Future State: Aquaman) and amazingly drawn by Jorge Corona (We Are Robin). 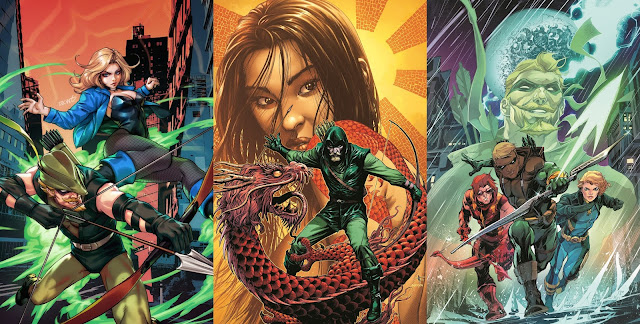 Catwoman writer Devin Grayson and artist Max Fiumara shine a spotlight on Roy Harper, a.k.a Red Arrow, as he continues to manage his transition from “sidekick” to adult hero, along with single parenthood and his struggles with addiction and recovery.

Phil Hester drew nearly fifty issues of Green Arrow in the early 2000s, working with popular writers like Kevin Smith, Brad Meltzer, and Judd Winnick. Here, Phil synthesizes what was so great about his run into a tremendous eight-page story. Green Arrow tries to save a young girl named Star who has been kidnapped but has to run through a gauntlet of his greatest villains and allies to get to her. Including: Onomatopoeia, Speedy (Mia Dearden), Green Lantern (Hal Jordan), Black Canary, Arsenal, Connor Hawke, and Count Vertigo.

This story focuses on the point in time where Green Arrow and Black Canary were married right before the New 52. On the day of their anniversary, the two are at each other’s throats and then Green Arrow gets kidnapped. Black Canary thinks the kidnapping is part of an anniversary game/present but quickly discovers that Green Arrow has REALLY been kidnapped by DEATHSTROKE and she has to save him. Vita Ayala (Future State: The Next Batman) writes a wonderful Mr. and Mrs. Smith-style action rom-com brought to life by Laura Braga (DC Comics Bombshells).

“The Sympathy of the Woods”

It’s the DC Rebirth Era, Green Arrow is feeling lost, the world is getting worse, and he doesn’t feel like he’s making enough of a difference. To cheer him up, Black Canary, Red Arrow (Emiko Queen), Diggle, and Henry Fyffe try to throw him a party to remind him of the beautiful community he’s built. But what starts as a celebration will become a rescue mission as Green Arrow is hunted down by the Dark Archer known as MERLYN. From DC talents Ben Percy (Nightwing) and Otto Schmidt (Harley Quinn).

The acclaimed Green Arrow creative team from the New 52, New York Times Bestselling author Jeff Lemire (Sweet Tooth)  and Andrea Sorrentino (Joker: Killer Smile) tell a transcendent final tale of Oliver Queen. In his older years, he requests to be left alone on the island where he was stranded so many decades ago. He’s gone there to connect to his own myth, his legacy, and to die in peace... but is it ever that simple for The Green Arrow? 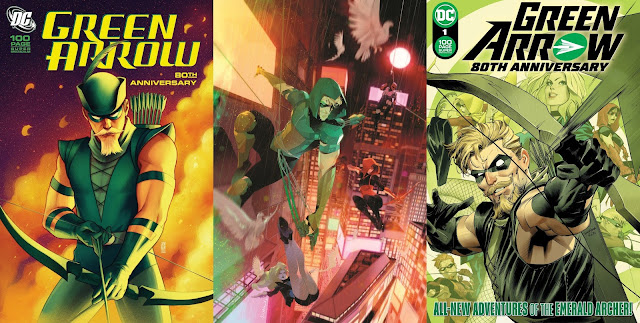 The variant covers for this must-have collector’s item come from some of the most prolific artists in comics:

For more information on the World’s Greatest Super Heroes, check out DC’s official website at www.dccomics.com and follow along on social media at @DCComics and @thedcnation.

We can truly look forward to a great celebration for a celebrated hero. If you want to read a review of the Deluxe Green Arrow: 80 Years of the Emerald Archer hardcover collection, then look no further than right here, on Fantastic Universes.