Fan Retrospectives: Vision: Part 7: I Too Shall Be Saved by Love 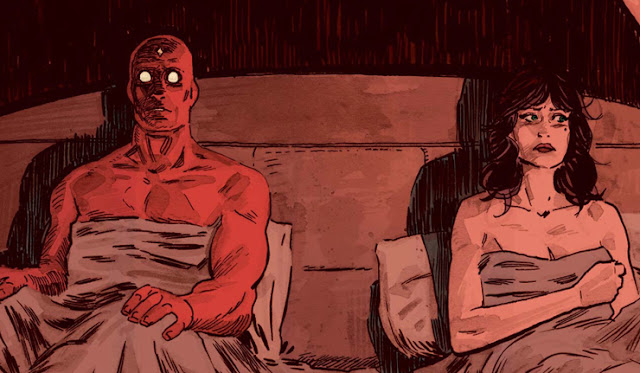 "I Too Shall Be Saved by Love"

This next chapter of Vision focuses on Vision's relationship with Scarlet Witch aka Wanda Maximoff. Not only is it a good recap of 50 years of storytelling, but it also serves in stark contrast between Vision and Virginia's relationship.

"I Too Shall Be Saved by Love"

The title "I Too Shall Be Saved by Love" is actually a quote from Avengers #147. There, Scarlet Witch needed to overcome the seductive powers of the Serpent Crown to save Vision from the Squadron Supreme. 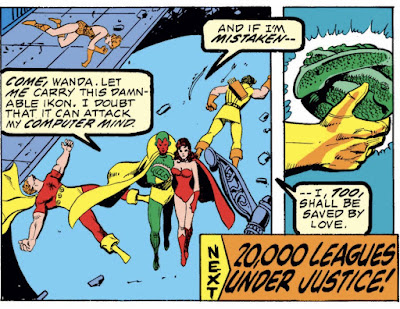 In the end, Vision theorized that Wanda's love for him helped her defeat the Serpent Crown and save him. Consequently, Vision's love for Wanda helped him hold back the Squadron Supreme from kidnapping Wanda. So in essence, both are saved by their mutual love.

We open with a flashback of Vision and the Scarlet Witch after probably their first sexual encounter. They both look awkward until Vision breaks the ice with a joke:

Wanda laughs at the joke and cuddles closer to Vision. The joke is an allusion to how the world sees Vision. The talking toaster is Vision asking existential questions, like "Do you sometimes feel empty?". The surprised toaster is the world who questions if Vision is even able to pontificate and emote independently. However, Vision has taken the scenario and injected humor into it- allowing him to ironically rise above his personal existential thoughts and connect with Wanda on a genuine level. 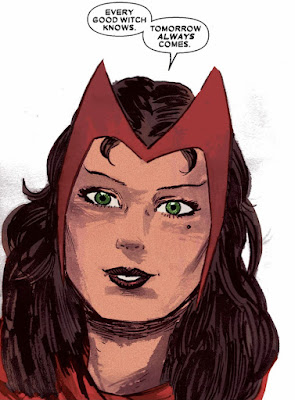 We are treated to a montage of flashbacks that show the evolution of Wanda and Vision's relationship. Some are created for this story and others are straight references from past comics.

The first montage took place between panels in Avengers #166, where the Avengers are attacking the Superman-esque Count Nefaria, while Vision and Scarlet Witch make out. Vision then confesses that he loves Wanda.

The next one depicts Vision and Wanda having a family dinner. But this being the Marvel Universe, it's a weird assortment of people. Of  the people there, is old Golden Age hero the Whizzer; Pietro Maximoff aka Quicksilver; Bova- who is a humanoid cow that nursed Wanda and Pietro as babies; Wonder Man; and Agatha Harkeness.

It seems like a great time as any to talk about guest artist Michael Walsh's art skills. He depicts his characters with such emotive faces. Definitely my favorite example is Quicksilver's face always looking impatient.

I also like how he shows Vision constantly looking wide-eyed, as if it is filled with wonderment and curiosity. Contrast with later in the issue where it shows Vision as a soulless, unemotional machine with squinting, dark eyes. 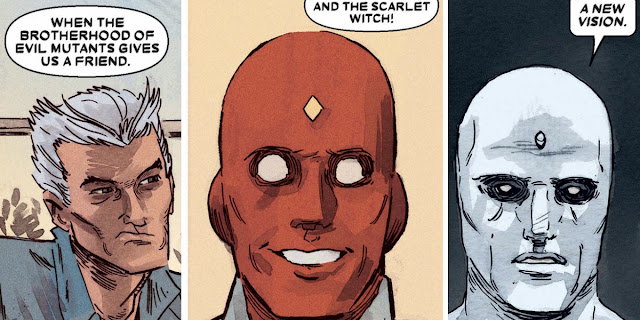 Anyways,there is also an intimate scene where Vision is helping Wanda get ready for a date. He is fiddling with the Wundagore Everbloom flower- the same flower that we previously saw Agatha digest in order for her to see Vision's future. 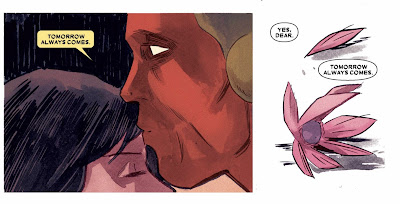 Here, the flower acts as a metaphor for Vision and Scarlet Witch's relationship. It can literally grant the owner visions of the future. However, it also shows the key personality differences between Wanda and Vision.

In previous flashbacks, Vision states how "Tomorrow does not always come." A somewhat cold, but pragmatic way of looking at life. To Vision, life does not ever really get better than the present moment. But Scarlet Witch retorts, " Tomorrow always comes."

Wanda is eternally optimistic. She believes that even if the present is not ideal, the future has a chance to be better. So when Vision later echos to Wanda that "Tomorrow always comes", it is an admission that they are able to overcome obstacles and build a future together.

Ironically, the Wundagore Flower did allow Agatha to later see a nightmarish future where Vision razes the Earth to protect his family.

The toaster joke that Vision made in the beginning of the issue, it informs a lot of the tension in later scenes depicting the turmoils of Wanda and Vision's relationship. At one point Vision and Wanda sire children, but they are actually magic entities and not real. Vision confronts Vision about how their existence is actually a lie. Wanda is human and prone to self-delusion. The Vision is not and cannot understand why she's okay with pretending the children are human babies.

When Wanda angrily Wanda shoots back: "You're a damn toaster."  it hurts Vision personally since it is an admission that he is "not real". Ironically, the ever-pragmatic Vision believes that the truth should always win out, even if it's not kind. This is depicted again in a later scene where Vision loses his emotions and turns white.

In the "Vision Quest" storyline, Vision is captured and disassembled by the government. The Avengers manage to reassemble his body and basic brain, but not his personality and emotional essence. So for a while, Vision turned into a cold, heartless machine.

White Vision coldly tells his children that he is not really their father and that Wanda is no longer his wife. He then justifies the cold- borderline cruel- way of talking to the children with: "Is the truth not kind?" 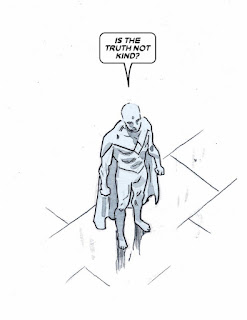 To Vision- whether as a heartless machine or as his normal self- the truth is the best way forward. No self-deception, no lying, because that is what humans do. Humans constantly act in contradictory ways.

Ironically, the present day Vision shows a continuous pattern of self-deception. When the police asked about CK's death, he lied about not knowing anything. When he discovers Virginia murdered and buried the Grim Reaper's body, Vision covered it up and created a family dog. All of this is in the name of appearing "normal" and protecting his family.

In the end, this is one of the biggest things that Vision took away from his failed romance with the Scarlet Witch: her sense of humanity- both good and bad.

A Parting Gift from the Scarlet Witch 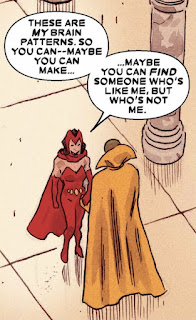 It's implied that Virginia possess Wanda's brain patterns. The story does not outright state it. But the final scene shows Vision and Virginia with the narration: "In the end, we begin again. And everything is new and different."

Contrast the two bookend scenes between Vision and Virginia and him and Wanda. Vision tells the same toaster joke to Virginia, but she does not laugh or seem to react. She does not understand the meaning behind the joke or humor. It grants them no comfort.

Visually, the room is depicted in cold colors versus with Wanda- it is in warm tones, implying more intimacy.

One can argue that Vision is in self-delusion over his family. They are real, but are they normal? It does not matter to Vision. He will make them normal by any means necessary. That also includes murder. 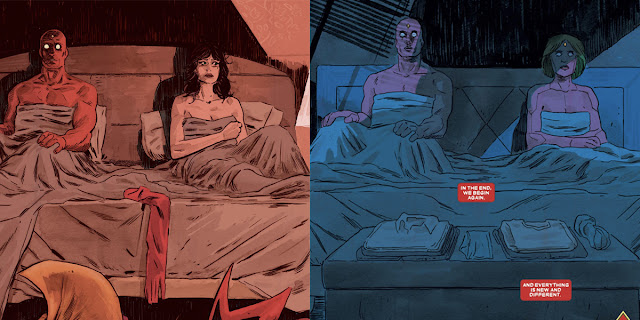 Tom King does an amazing job stitching together disconnected pieces of continuity and use it to build up his themes and motifs in Vision. This chapter also is able to reveal an important piece of the puzzle: Virginia is based on Wanda's brain waves. This really feels like a haunting tale that will compel newer readers and hardcore continuity fans alike.