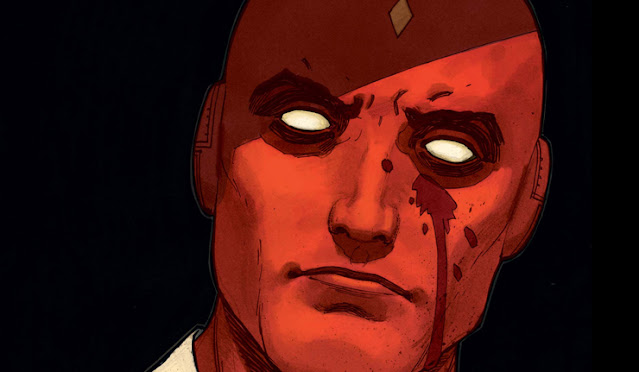 The opening of the next chapter of Vision has writer Tom King pose a philosophical question: P vs NP.

P stands for a "problem" or a problem that a computer can fix in a reasonable amount of time using algorithms as shortcuts. Then there is NP or "problems that cannot be fixed and will theoretically take millions of years to fix". 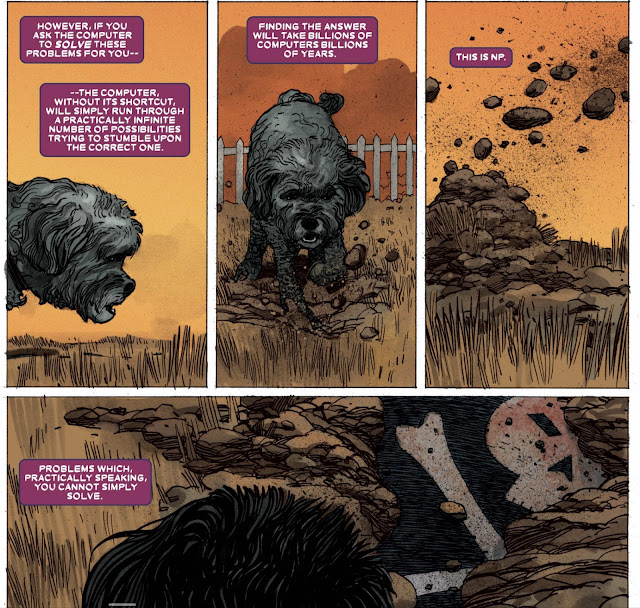 The theory of P vs NP is typically discussed within the context of math or computer sciences. However King uses it as an extended metaphor  for human choices as it pertains to the Visions' dilemma. They are trying to fit in and be "normal" (i.e. P), however new problems constantly come up  that interfere with the Visions' quest for normalcy, such as the the Grim Reaper attacking the family or Vin choking CK. So far the family's solution have been to either ignore it or obfuscate the truth (i.e. using algorithms to solve for P).

But problems continue to crop up or become uncovered. This conflict is literalized as we see in real time as we see an old problem get literally uncovered. The neighborhood dog starts diggin up the Grim Reaper's corpse in the Visions' backyard. This parallel story telling connects the P v NP debate with the Visions' quagmire: Is being normal a P or a NP? So far their solutions have been short-term always snowball into a bigger problem down the road.

This is escalated more as the dog accidentally electrocutes itself to death biting at the Grim Reaper. Vision discovers the dead dog and Reaper's body, which now means that he knows about Virginia's involvment with the Reaper's murder, as well as CK's murder and his father being in a coma. 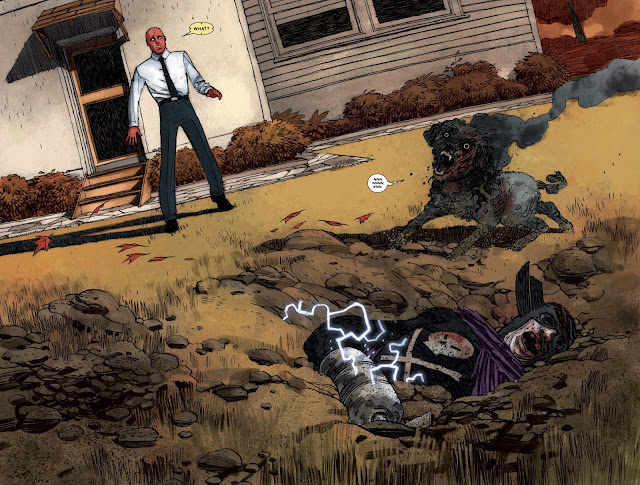 Side-note: check out the Vision family's new table. In the previous chapter, Virginia broke the dining table in a fit of anger. Now the family uses what looks like a folding table. There is nothing important about that detail, it's just amusing. 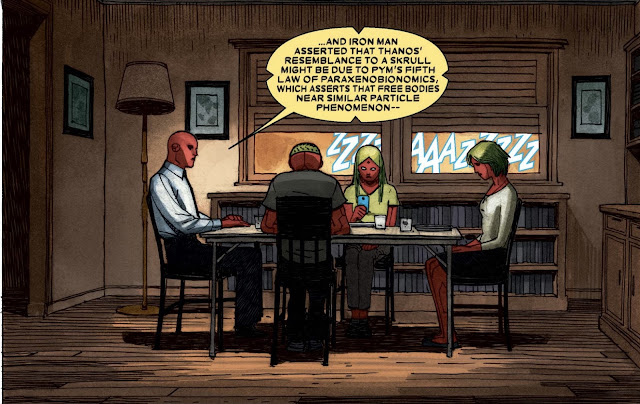 Idle Routines to Show How Normal Things Are

Speaking of broken household items, when their neighbor George comes over to search for their missing dog the next day, we see that the house is a wreck and Viv is crying in a corner. King chose to imply the horror of Vision's apparently violent reaction to the news of Virginia's list of sins. Ironically, imagining the Vision's reaction is actually scarier. 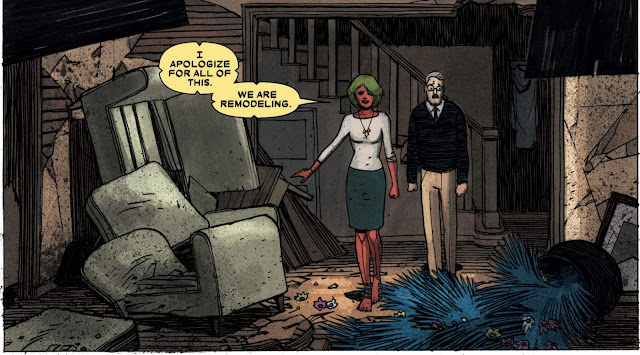 George inspects the house and Virginia returns their metal cookie tray- albeit bent up due to it being used to murder the Reaper in chapter one.  Virginia's insistence to return a damaged tray is another example of her idly doing an action  for the sake of "normalcy". But once again, Virginia does not understand the meaning behind the act of returning items, hence making her action an empty gesture. 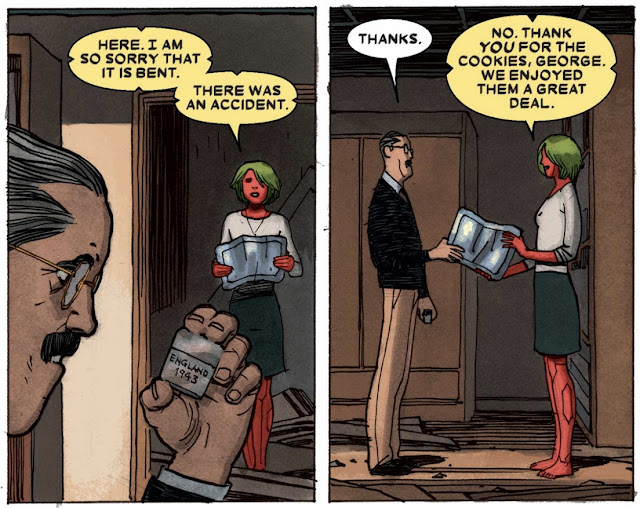 Meanwhile, Vision is down in his lab performing a craniotomy on the dog. Now that Vision knows about Virginia's attempts to cover up, he now has literal blood on his hands. Vision also begins to make an active choice to protect his family and their wellbeing.

His internal monologue even states how his family does not have an agenda or a plan, they just simply want to exist- probably the most basic aspect of being normal. However, now that Vision is now attempting to create normalcy, he takes the dog's brainwaves and then created a synthezoid dog for his children. 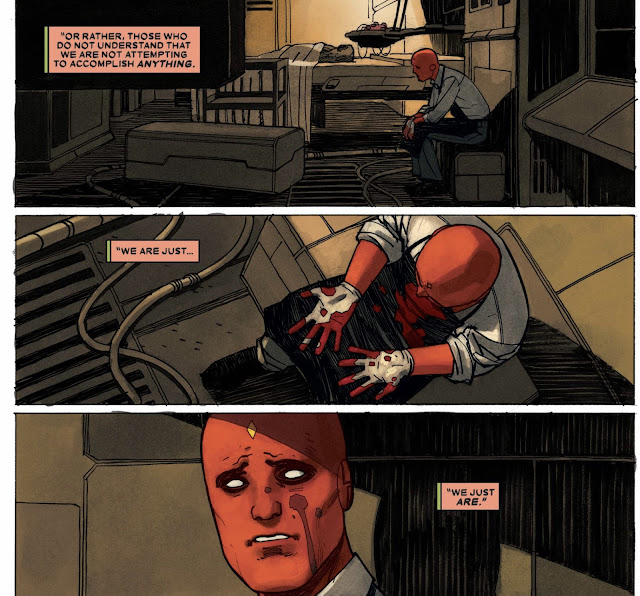 After all, what's more American and normal than a nuclear family than a dog?

"He Will Raze the World"

But the ominous narration indicates how Vision's  choice is ultimately NP. So what do you do when you determine a choice- like making a synthezoid family- is an impossible option? You can stop it here or you continue down the path, even though you know that it is flawed. That is the predicament that Vision faces and his choice is slowly eroding his moral code. 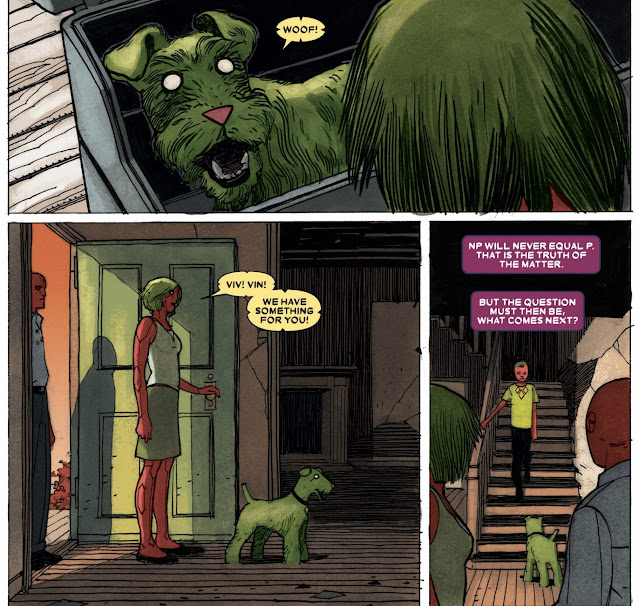 Once again, the irony is that making these impossible choices to preserve his family actually makes him more human. Nothing is ever easy in life. Humans have to make choices that seem to be P v NP all the time, especially if they're in a position of power. Vision accepts that he is no longer concerned about practicality, but only concerned about his family.

The ghost of Agatha Harkness realizes that now that Vision has only one, singular goal. He now will stop at nothing to preserve it, including killing the world to protect his family. Agatha passes this warning onto the Avengers, which in turns, gives them in their own personal conundrum: help their friend or stop him before he goes too far? 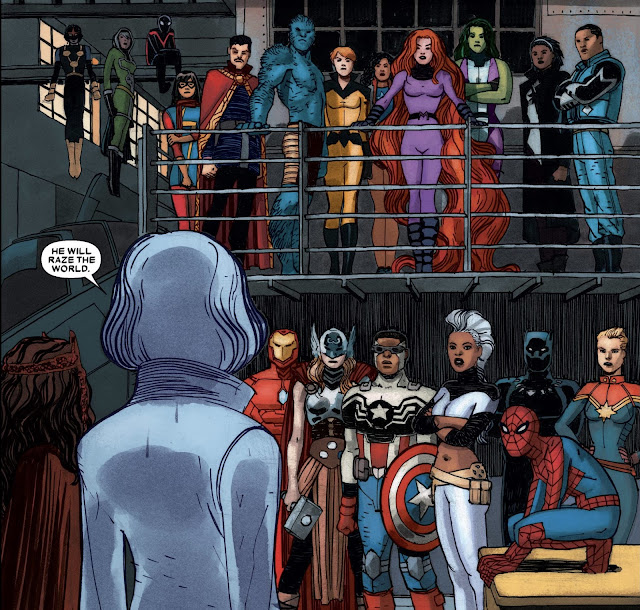 Similar to the last issue, Vision becomes is slowly acting in a more self-interested way. The problem is that it is now full-on covering up crimes for his family. And the tensions ramp up to the point where Agatha Harkness is now predicting that he is willing to destroy everything to make it happen. Not to mention, the story crossed the creepy threshold when it made the choice to kill a dog and multilate its body. We're now crossed into full-on psychological horror territory. It is lavish, it is disturbing, and it continues to give you that sense of dread.