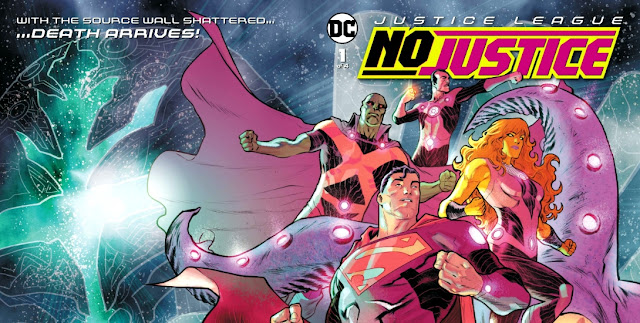 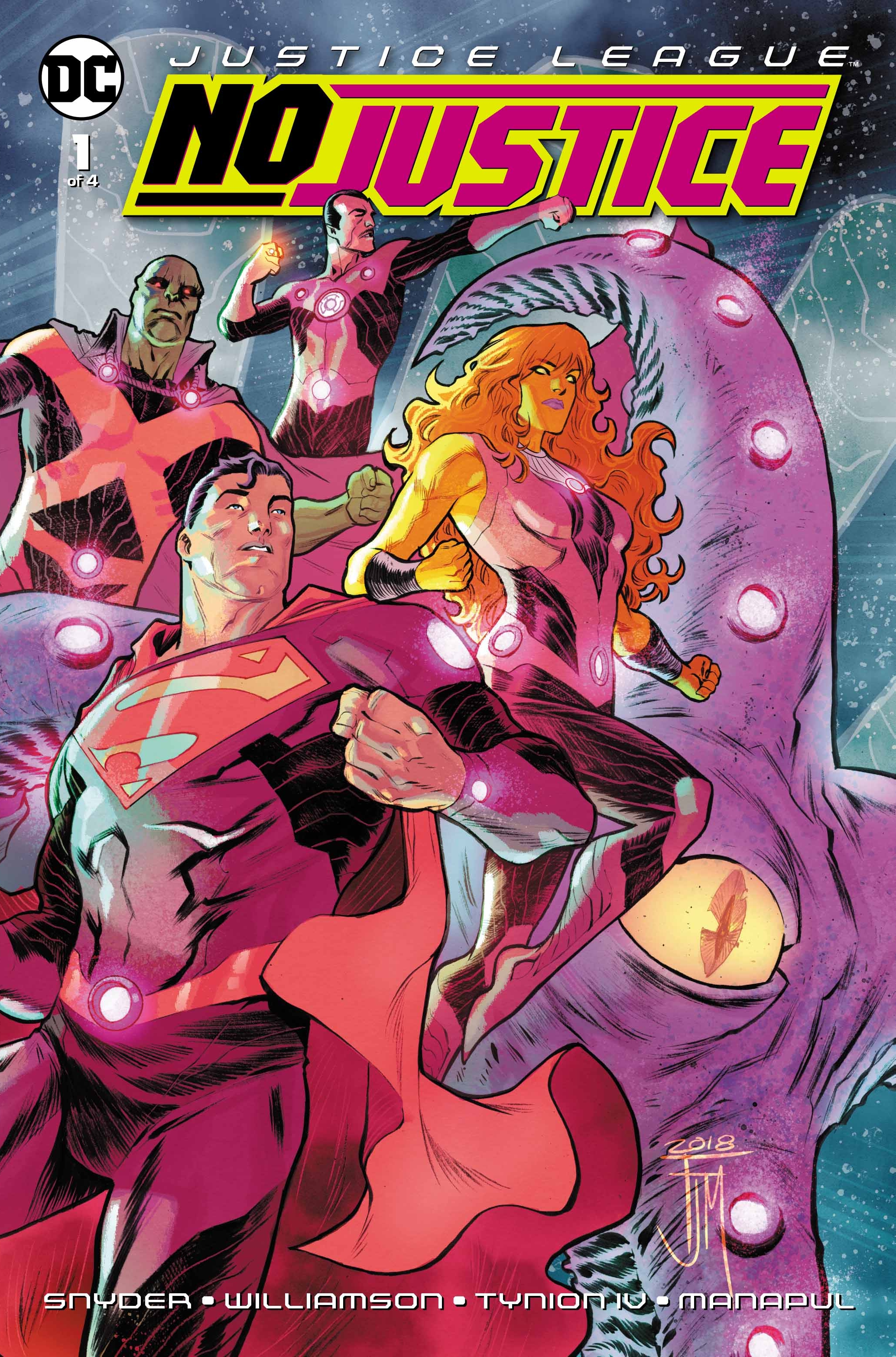 Writers: Scott Snyder, James Tynion IV & Joshua Williamson
Artists: Francis Manapul & Hi-Fi
Review by Adam Ray
The Source Wall; an ancient astral barrier protecting the wider multiverse from us, and us from it, has been broken. Ancient and enormous threats are coming from out of the dark, and in this issue of No Justice, Brainiac says our heroes aren’t doing their jobs right... what?
I’m a firm believer that people should learn from their mistakes. I appreciate any help someone wants to give me, and I listen closely. Usually, they tell me to tighten my grammar, or see what I could have done differently. Most mentors do not use simple mathematics to defeat my friends and I in battle.
The issue starts with all of our favourite teams getting beaten badly, while everyone’s beloved shady politician and war criminal, Amanda Waller watches from castle of computer screens. Brainy takes our heroes, and some unexpected villains, to see an entity hundreds of feet tall attacking his homeworld. Now we know what the threat is. Eagle eyed readers pestering their local comic book stores on Free Comic Book Day would remember that hundred foot tall being with its three friends hovering over a scared Supergirl from DC Nation #0.
In all of this, I think Batman himself is ready to listen, and go along with the plans to stop these Titans, as long as the plan itself makes sense. He tells his ever-tutting son to stay close despite what Brainiac says. The Bat doesn’t take orders well. 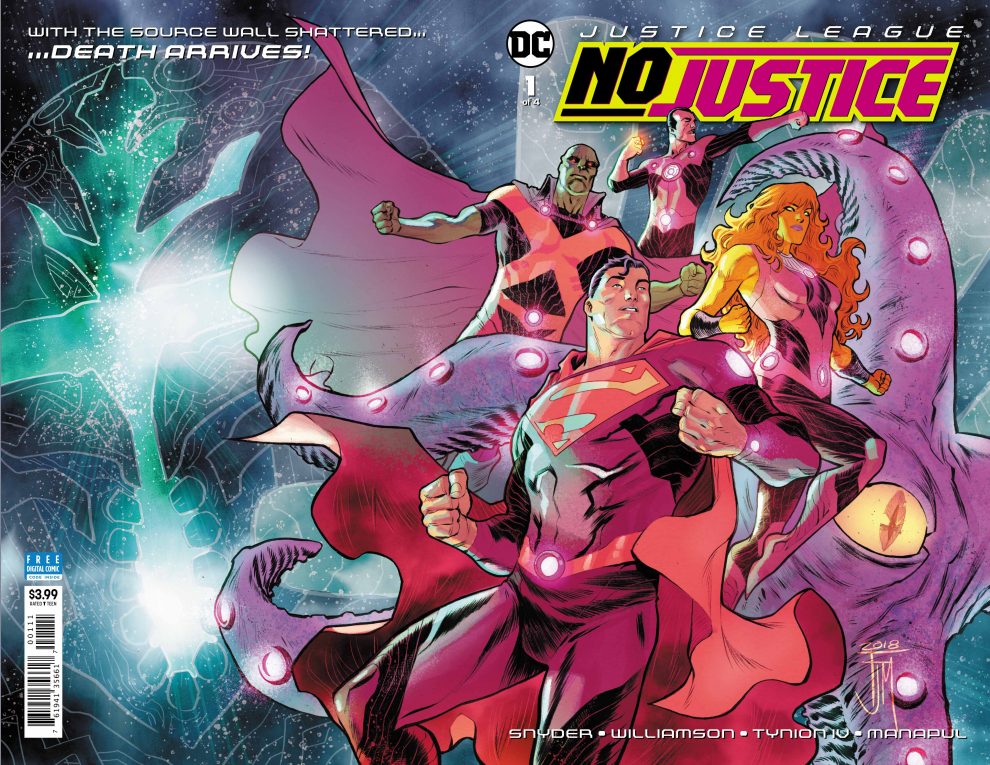 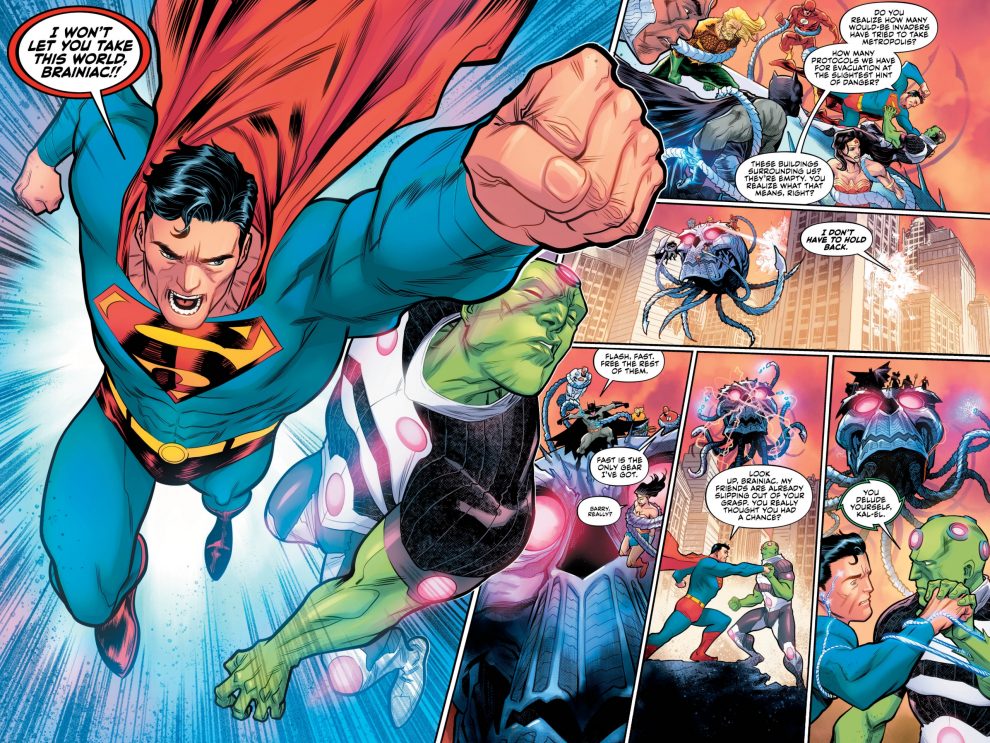 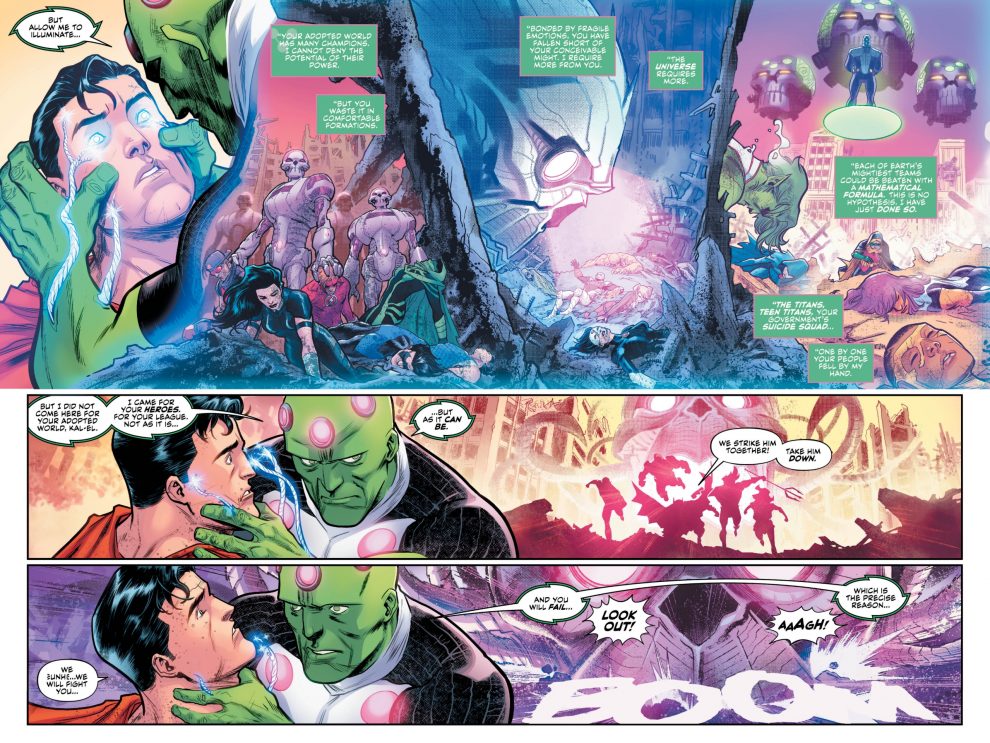 The cast of characters include many DC staples, as well as some less well known, and even a few infamous. Once the mini series ends, these strange bedfellows will form new teams, with characters who aren’t even in this issue, to continue fighting whatever comes through The Source Wall.
The biggest point in favour of No Justice so far is something that happens a lot in mini-series’ like this one: The story is big and grandiose enough to draw in new readers. Having Amanda Waller, and seeing Braniac flanked by the legendary team from the Justice League movie mirrors what’s going on with the films nicely. The artistic choices by Francis Manapul to have Harley have the pink and blue dip dye a-la Margot Robbie and his huge double-page splashes pull the reader in. Die-hard fans lose nothing either, being rewarded by seeing known entities thrown together in ways never witnessed before. The best part is, we still don’t quite know who’s being paired up with whom.

Looking ahead, Scott Snyder and company have drawn together lots of powerful players in all-new combinations. Only the coming issues will show how these teams work together. I’m curious and excited to see what happens next. What do you think? Be sure to let us know.