Exclusive: Live In London With Professor Elemental, The Meme Punks, and Victor and The Bully 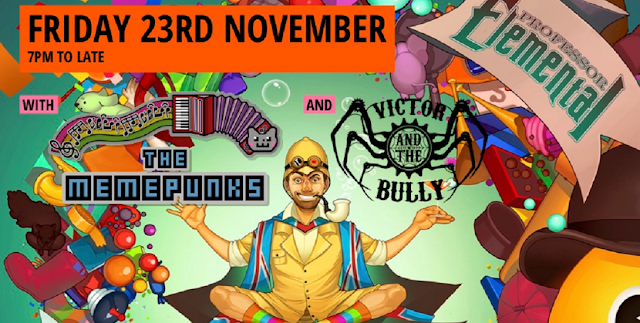 Anyone who's a regular visitor to our website will be familiar with the music, mirth and madness of Professor Elemental, and his alter-ego Paul Alborough. The Prof has been making music for a decade now and has built up a loyal and passionate fan-base.

We here at Fantastic Universes are huge fans, were fortunate enough to preview and review his most recent album, "School Of Whimsy", and interview the men himselves. As fans we could not pass up the opportunity of seeing him perform live, when his U.K. tour brought him to our home town of London.

On November 23rd the Chap-Hop legend, alongside The Meme Punks and Victor and The Bully, played at Nambucca in North London. 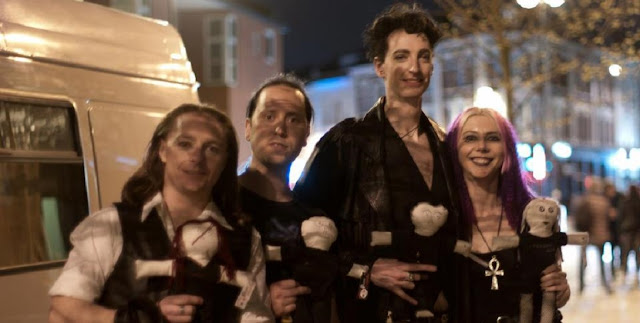 Of course we were all very familiar with the music of Professor Elemental, and had some knowledge of Victor and The Bully after their collaboration with the Prof on the spectacularly addictive track F.R.E.A.K.S. Both these stellar talents' back catalogues are available on Spotify and iTunes, but the Meme Punks were a bit more of a mystery. Thankfully research is a passion of mine, particularly when there's a pot of gold at the end of the rainbow. 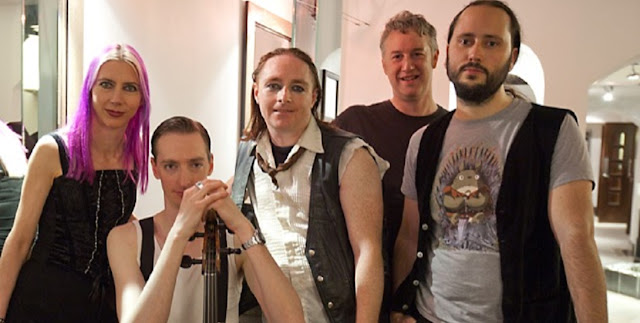 These guys absolutely rock live. Their musical megamixes aren't your bog-standard fare... oh, no! This isn't "Under Pressure/Ice, Ice Baby" this band is far more creative.

They have the brass cojones, and musical talent, to combine "Roxanne" by the Police with "Beat It" by Michael Jackson, or - my personal favourite - Sonny Rhodes' "The Ballad of Serenity" (the opening theme of cult classic sci-fi show "Firefly") with Bon Jovi's "Wanted Dead Or Alive". I kid you not.

Red is a bundle of energy, and a terrific front man. Drummer Paul must have muscles that would put Schwarzenegger to shame! Psyche is a wonder to behold; she sings and she plays, her digits whizzing over multiple keyboards like spiders on speed. All the while she maintains a straight face and composure that make both Chris Lowe and Ron Mael look like a hyperactive Ace Ventura. Ed Easton produces sounds from his cello that are mind boggling; making the classical instrument sound like a slap bass, or even an electric guitar when required.

If you ever get the chance to catch the Meme Punks live, do yourself a favour and go. It's clear that these are classically trained musicians, but their stage presence, performance, versatility and charisma are pure 100% rock and roll. They also tap Queen, The Cure, Inspector Gadget and many, many more in their set. Brilliant stuff. 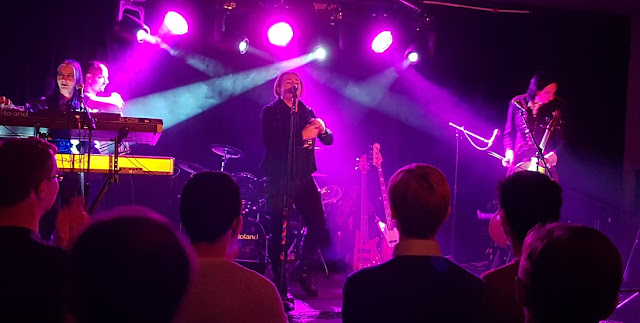 Victor and The Bully are a two piece band, but you'd never know it when you hear them perform. If you've heard their albums "Deathbed Confessions" or "8th Deadly Sin" you'll know that they write and play all that stuff themselves. This, of course, isn't possible live. On stage they handle a ukulele, and lead vocals (Victor) and acoustic guitar and backing vocals (Bully) over an Orchestral Backing of honky-tonk piano, violins, trumpets and anything else they can lay their grubby little mitts on. 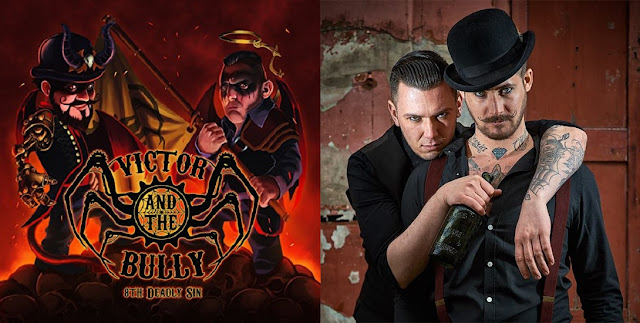 These dudes are so hot that Johnny Storm needed an ice bath after seeing them perform.

Victor is the chap in the hat. The Bully isn't. Over the years I've renamed them Hatman & Bobbin, Horn & Forlorn, Devil & The Zombie and 'Tache & Terror. Call them whatever you like, as long as you call them in time for dinner.

What I have to call them is brilliant. 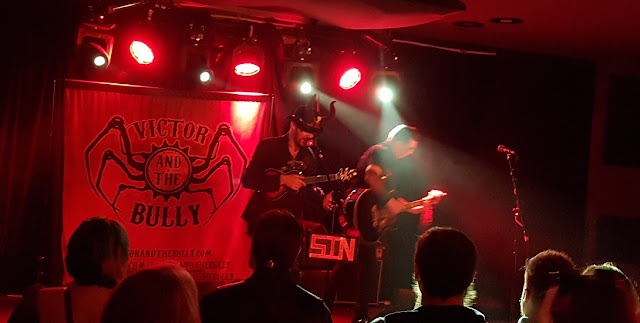 The one thing I can't stand about most modern music is how dull, soulless and prefabricated most of it is. Another is just how awful most chart acts sound live. So much of today's pop could be made by anybody with the right equipment, and zero talent. If anyone can do it it's no longer special, and - in my view - has little, if any merit.

Victor and The Bully are musicians, showmen and talented performers. I would actually say that I prefer their live sound to their records. They're really that good. 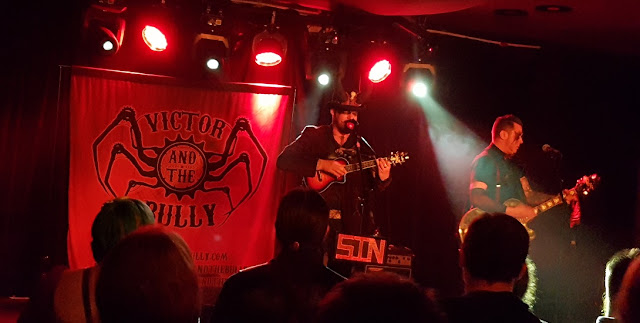 If you look at their set list you could easily be forgiven for thinking that this is a band that worships evil, sin, death and destruction. Actually, looking at them probably wouldn't change your mind.

Hearing them play, however...

This band is all about having fun, celebrating life and embracing what makes you special and unique. Don't try to conform, don't just exist... LIVE. What people want you to be isn't what makes you who you are. The one thing that you can do that no-one else can do for you is be yourself. Just do you, be you, and be the best, happiest you that you can possibly be.

Is there any better advice out there? 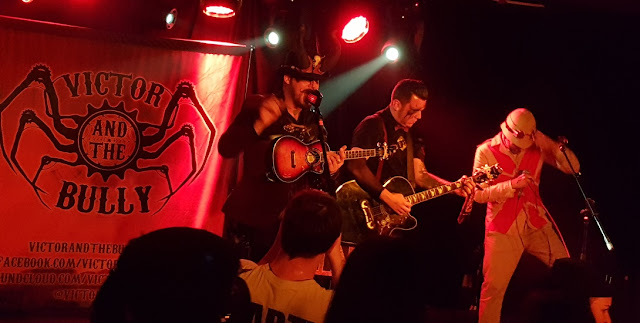 Near the end of their set the Diabolical Duo were joined on stage by the paragon of positivity known as Professor Elemental. The trio performed an absolutely stellar version of their hit collaboration F.R.E.A.K.S. The crowd went justifiably crazy.

"Fabulous, Ridiculous, Eccentric and Amazing, we're Kooky and we're Splendid...
We are the Freaks." 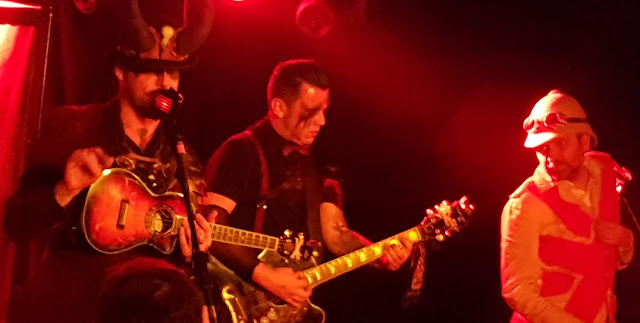 The evening came to a close with a set by Professor Elemental.

I have to say that he more than lived up to his billing, even after following the two incredible bands that preceded him.

He engages with the crowd, he makes them a part of the show. His joy, eccentricity and life-affirming energy are infectious. His set list played like a greatest hits album; "Cup Of Brown Joy". "Fighting Trousers", "Comfort Zone", "Came A Long Way." Songs old and new, spanning a whole decade. 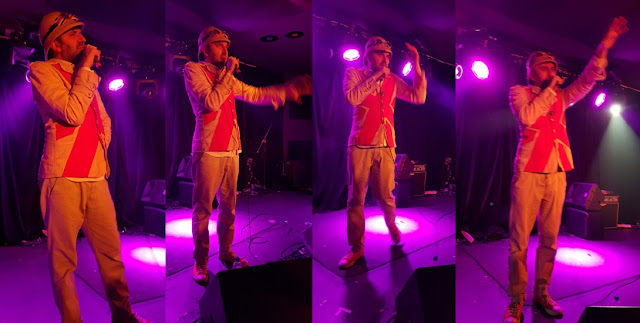 What a blast! The Prof regaled, recanted and rapped up a storm.

He performed a phenomenal freestyle, spitting lyrics about people whose names the fans randomly shouted out at him. Donald Trump, Theresa May, Nigel Farage; all three received a rib-tickling roasting at the hands of our very own Chap-Hop champion.

He made the whole house throw their hands in the air, and wave them like they just don't care. Back in the late 70s/early 80s Hip-Hop was all about "Peace,Unity, Love, and Having fun." For one night, in North London, that vibe and energy was back again, in style.

We hugged complete strangers, we did a demonic Hokey-Cokey, we sang, shouted and rapped our throats raw. 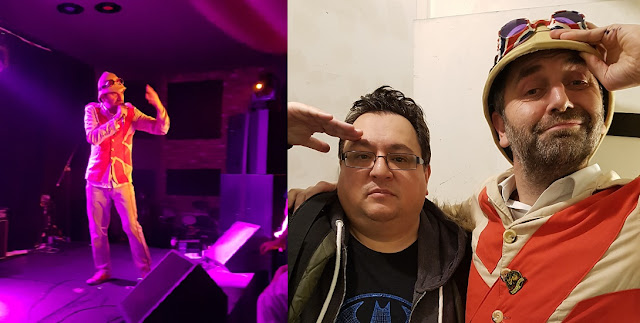 With me at the show was my son, Adam (a regular contributor to this site, and the three other websites I write for) and our dear friend Damien Walker. The three of us had a great time. The music was terrific, the venue was intimate, yet large enough to house a crowd of passionate fans. The acoustics and engineering were top-drawer, making each act sound absolutely terrific.

We spoke with all the talents, who were as splendid a bunch of folks as you could ever hope to meet.

Red, Psyche, and Dave from the Meme Punks all chatted with us at rehearsal and after their sound checks. Victor & The Bully (who may not thank me for this) are solid, lovely, friendly blokes, and the Prof...

I can honestly say that he is everything you would expect him to be. Bonkers, friendly, energetic, passionate and talented. His comics, his videos, his audio adventures, his music; all pure, unadulterated fun.

If I ever get up in the morning and am feeling down, or out of sorts, I blast out "Good Morning", followed by any Professor Elemental album and I'm back in the game.

At the show I just had to buy the tenth anniversary double CD special edition of his first solo album "The Indifference Engine" and was fortunate enough to be the first person in the country to do so (thanks, Damien) I even got it signed by the professor himself. 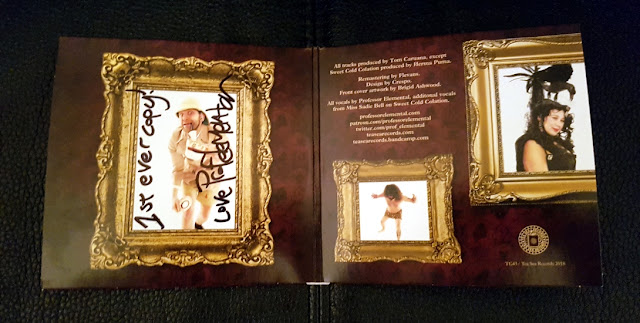 If you want to sample the Professors work, then there's no better place to start. This double CD contains the entire first album, beautifully remastered, as well as remixes for all ten tracks, bonus instrumental versions to rap along to yourself, and the ultra rare "Moon Monkeys" bonus track. CD 2 has a stonking 26 songs on it!

We all had such a great time. I have to rate the night as one of the best gigs I've ever attended, and the best value tickets I've ever purchased. The venue had a terrific atmosphere, every fan was amazing, every act on the card was stellar and I have no negative comments to make, whatsoever.

If you ever spot a poster in your town, or see an ad in your local paper announcing that Professor Elemental, The Meme Punks or Victor and The Bully are playing live near you, do yourself a favour and run - don't walk - to the nearest outlet and get yourself a ticket. If you want to hear brilliant music from great talents, look no further.

I promise that you won't regret it.

For Victor and The Bully Go to:
https://www.victorandthebully.com/
YouTube
Facebook
The Sinners Page - everyone is a sinner. If someone tells you they're not, then they're lying. Lying is a sin... so there you go.
Or follow them on Twitter @VictorBully

All their music can be found on Spotify and on iTunes.
The Prof  Victor And The Bully 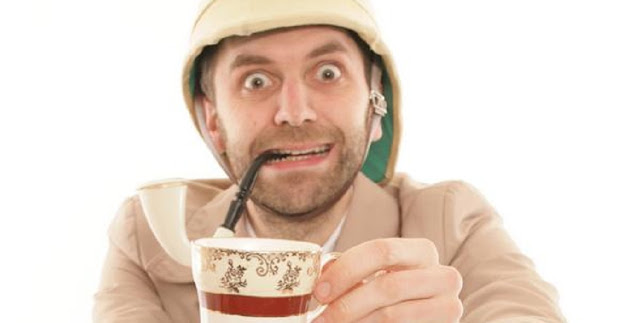