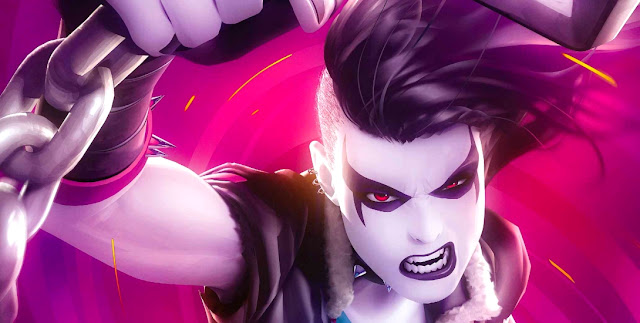 “THE GIRL WHO FEEL FROM THE SKY” and “THE SAME OLD GROUND.” Yes, that’s right folks, Teen Titans #25 is an “Extra-Sized Anniversary Issue” with two stories, both of which I absolutely loved.
When the creative teams changed after issue #19, I was left questioning so much about this series. The huge bonkers Dark Nights: Metal event changed the landscape of DC Comics, and this series was one the ones most affected. Writer Adam Glass changed the team, not just by adding new members, but by completely altering the feel and atmosphere of the book. At first I didn’t think I was going to like the new direction, and in a way I was right; I don’t like the Teen Titans series any more…
… I absolutely love it. 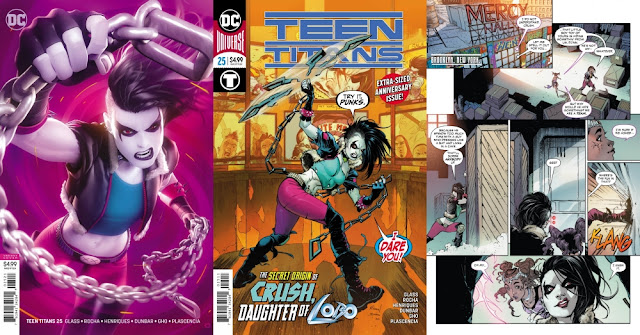 Wow, where do I even begin? Last summer’s Teen Titans Special was the debut of both the new writer, and the new group of Titans. In the space of just seven issues author Adam Glass has changed a series which I always kind of liked, into one which is always near the very top of my reading list.
I’ve gotten into some heated discussions with fans , and even some comics creators, online when they’ve said that DC Comics are too dark or that the company doesn’t know how to do “Fun.” This series is one I recommend to everyone who’s sick of angst, grit, grime and darkness. Please don’t misunderstand me, I love that kind of stuff too, but every now and then we all need a little palate cleanser. This comic is one of the yummiest sorbets in town.
“The Girl Who Fell From The Sky” finally gives us “The Secret Origin Of Crush, Daughter Of Lobo.” Boy, was this one worth the wait.
As soon as you hear the name Lobo your mind is dragged to far off worlds, violence, cigars and mayhem. While Crush is definitely her father’s daughter, she is so much more besides. 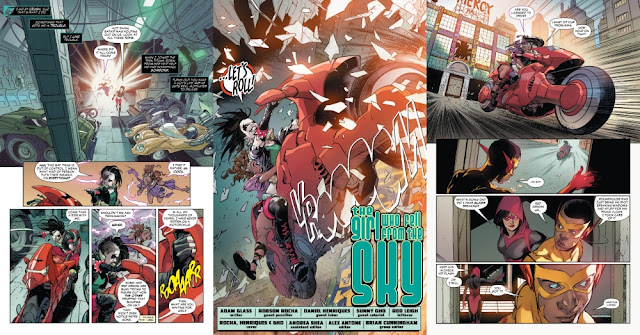 This origin story is one of the greatest examples of nurture over nature that I’ve ever read. It works as a morality tale, as a fun adventure and even as a kind of “What if Superman got picked up by a family that wasn’t the Kents?” all at once. I don’t want to give too much away, but this is one of the best origin tales I’ve read in a long, long time.
I laughed out loud at the scene with Crush and D’Jinn in the diner, where Adam Glass tells us what’s even worse than being disguised as a hooker. Absolutely priceless.
In “The Same Old Ground” we learn a little more about the background of one of the other new team members, Roundhouse. This is another great little tale. Here we find out exactly how our favorite blue skinned superhero survived the nuclear blast at the end of issue #21, and we also get to see some of his life outside of super-heroing. More importantly we are introduced to a key member of his family. I’m going to shut up now, as I seriously want everyone to go out and buy this issue. 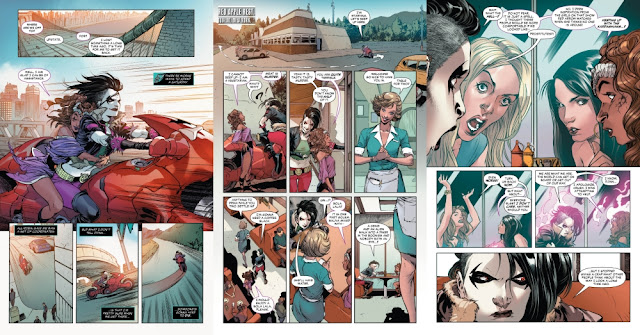 The art is as great as the writing. I’m a huge Bernard Chang fan, but the artists in charge of this issue have done him, and themselves, proud. Robson Rocha, Daniel Henriques and Sunny Gho give us a crazy road-trip/origin story. We het speeding bikes, smashed windows, broken down doors and more great character moments in 30 pages than some comics manage in 30 complete issues.
Max Dunbar and Ivan Plascencia also deliver some gorgeous visuals in the eight page backup story. Once again what the team achieves in a few short pages is incredibly impressive.
As always letterer Rob Leigh keeps the issue noisy, atmospheric and easy to read.

Please move on… nothing to see here.

This is the comic to hand to an old grouch, to anyone who says that comics can’t be fun, or to anybody who thinks that all superheroes are two dimensional cardboard cut-outs with no personality. Anyone who doesn’t fall at least a little bit in love with both Crush and Roundhouse after reading this issue doesn’t have a heart. Nay, they are soulless shells and cold shambling zombies!
This issue gives us so many answers, but even though Crush and Roundhouse have had many of their secrets divulged, D’Jinn remains a figure of mystery. After reading this issue I cannot wait to see what Mr. Glass has up his sleeve for the origin of the team’s resident magic user.
This comic was seriously off the Obelus.