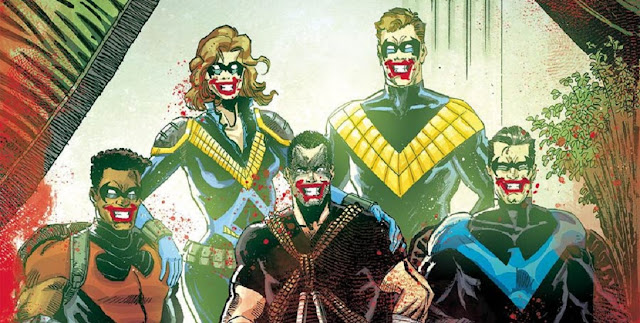 “Corrosion Of The Corrupted.” He may not have his costume, but Mr. Grayson is most definitely back in the fight. After saving Bludhaven from Scarecrow in issue #56 Ric has decided to join Detective Sapienza and his gang of Nightwings. Sapienza thinks that this is down to him, but, though Ric may not remember being Dick Grayson the crime-fighter, his former self lives large within him.

This series has really had a rough time of it in recent months. First, writer Benjamin Percy left the series prematurely, then Nightwing’s battle with amnesia (possibly) cost him a few readers. Scriptwriter Fabian Nicieza left after issue #56 and his proposed replacement, the talented Eric Esquivel, left DC Comics under a cloud of controversy. Leading us to a new co-writer, Zack Kaplan, being dropped into deep water.
The good news is that this boy can swim!
After a very enjoyable debut last month, Mr. Kaplan continues to impress. I’ve found his scripts and dialogue, in conjunction with Scott Lobdell’s plot, very enjoyable indeed. He’s not only managed being thrown into a sticky situation, he’s also continued developing the story his predecessors have left for him, while adding a new voice of his own. His grasp understanding of the series’ cast, and their motivations, has led to some great, and realistic characterization. Something which I approve of wholeheartedly.

Andworld’s letters, which this month mainly consist of dialogue balloons and diary entries, written by Ric, work with the art. The issue flows seamlessly, and, while it’s a fairly wordy issue, it’s extremely easy and fun to read.

While the pace has picked up a little, I can still tell that this issue is setting up more, and progressing less. While it’s frustrating, it’s also understandable. Yes, this title has gone through the wringer, and if it’s to succeed it needs to find its bearings, and get back on solid ground. I commend this team and appreciate their efforts.

While it isn’t a groundbreaking masterpiece, Nightwing #58 is still a great example of good, well crafted sequential art. The story made sense, the characters are believable/lovable/hateful, depending on their purpose, and the art is gorgeous. Whatever you want to call him, the main character of this title has been a huge part of my life for over four decades, so, I’m going to stick with him, support him, and the fine, talented creators that continue to bring us his adventures, until I find a valid reason not to. This book is still one of my favorite monthly reads.