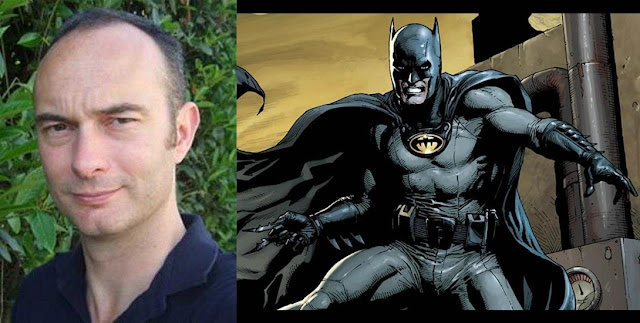 Gary Frank is a British born comics artist who has worked on Midnight Nation and Supreme Power, both written by J. Michael Straczynski. I first fell in love with his incredibly detailed pencils during his two year run on The Incredible Hulk, with legendary writer Peter David.

With DC Comics he has had stellar runs on Supergirl, and has blown the comics world away on his collaborations with Geoff Johns; Batman: Earth One, Doomsday Clock and with their complete recreation and updating of SHAZAM! the original Captain Marvel.
Frank also has his own creator owned series, Kin, which he also writes
I was fortunate enough to steal a few minutes with Gary at this fall’s MCM London Comic-Con. He’s not just an incredibly talented artist, he’s humble, down to earth and a great person to talk to.

Steve J. Ray: Hi, Gary. It’s so great seeing you here. Thanks, so much for taking some time out of your hectic schedule to talk to me.
Gary Frank: Thank you. It’s nice to meet all the fans who are so kind and generous, and the people who write the reviews.
SJR: Most of us are fans, first and foremost. I’ve been following you career since seeing your work on Incredible Hulk with Peter David, which was just so cool. That run was legendary, and your work on it is brilliant.
GF: Thank you. I’ve been so lucky to work with some incredible writers. Peter, Michael (Straczynski) and Geoff, of course. When you get scripts like theirs you can’t help but want to deliver the very best work you can.

SJR: Your art is so detailed, I often have to just stop to take it all in. Not just action scenes, and battles, but the way your characters act and react, and your facial expressions. Do you find that difficult?
GF: It’s all part of storytelling. While I joke that my job mainly involves showing people in spandex beat each other up, of course there’s a lot more to it than that.
SJR: Absolutely. Back in the day there were comics that mainly just showed that… and they were incredibly popular, but that doesn’t last. You’ve been in the business since 1990, so that’s close to thirty years! That comes with versatility.
GF: That’s very kind.
SJR: So, you’ve drawn for the independents, Marvel and DC. Are there massive differences between companies?
GF: Not in terms of what they ask for, but in terms of pressure, or creativity… yes. They all just want to make great comics, but with the independents there’s a certain amount of freedom, particularly if it’s purely your own stuff. The pressure comes from the work you’re producing being all yours, and not having anytime three else to hide behind. You have to paint your work in the best light possible.
With characters like Superman, or SHAZAM! or Hulk, you more or less have to leave the characters as you found them, because they still have to be around years after. That does take some of the freedom of creativity away, but the pressure comes from giving these legendary figures your take, or stamp, and doing them justice. It’s incredible to be drawing the characters you love, and who made you read comics in the first place.

The Clock Is Ticking

SJR: That’s so true. With something like Doomsday Clock the pressure must’ve been even greater. Creating a sequel to Watchmen, one of the most revered and admired series of all time must’ve been incredibly daunting.
GF: I refused to do it, for the longest time.
SJR: Wow! Really? Though… actually, I totally get that.
GF: Geoff (Johns) was on me for months about it. Following on from Dave Gibbons is both an honor and a real commitment. You don’t want to let him down and you don’t want to let yourself down. Just taking a job like that on is pressure… and Geoff was following on from Alan Moore! None of us takes that lightly, we’re both fans of Watchmen, just like everyone else.
It’s seeing Geoff’s passion for the project and the characters, plus knowing his work and reading his scripts that convinced me. We’re not doing this to be the guys that made the Watchmen sequel, we’re doing it because of our love of comics and these characters.

SJR: From my reviews you know that I was opposed to Doomsday Clock when I first heard about it, but seeing the work the entire team has put into the book has won me over.
I know that you’ve both received a ton of fan backlash due to the long wait between issues, but every time I pick up a copy, and see the amount of love and hard work that’s in it, it makes it more than worth the wait.
GF: Some fans have been very kind and really get it. They know that we’d rather put out something really good, than deliver something rushed. As creators we want to deliver the best work possible, as fans you deserve to receive that.
SJR: It’s great for me to see that there are so many great British talents still taking the American artform of comics and elevating it. Like you said, you’re building on the work of Alan Moore and Dave Gibbons, as a British artist is that important to you?
GF: Honestly, I never really thought about that. I’ve worked in the U.S. and I now live in Italy, so that’s something I hadn’t actually considered.
SJR: We’re just one world, at the end of the day… whichever universe we’re in.
So, to close: Is there anything you can tell us about Doomsday Clock #12?
GF: Expect the unexpected, and expect to get more than you bargained for. We’ve had to make the final issue bigger than the previous 11. We wanted to help manage all the ideas and visuals without having to cut things out or condense them. My work on the issue is done and I’m very proud of it.
SJR: I can’t wait to read it! Thanks, Gary.
GF: Thank you.

It was brilliant meeting and talking to Gary Frank, he’s such a great guy and an incredible talent.
MCM Comic-Con has really embraced comics with it’s most recent shows and let fans connect with some of the finest creators in the business. Keep an eye on Fantastic Universes for my conversations with artist Mark Buckingham, lead writer and show-runner of Pennyworth Bruno Heller, as well as with the cast of the show; Ben Aldridge, Paloma Faith and Alfred Himself, Jack Bannon.
Images May Be Subject To Copyright. Photo Of The Artist And Interviewer by Damien Walker.