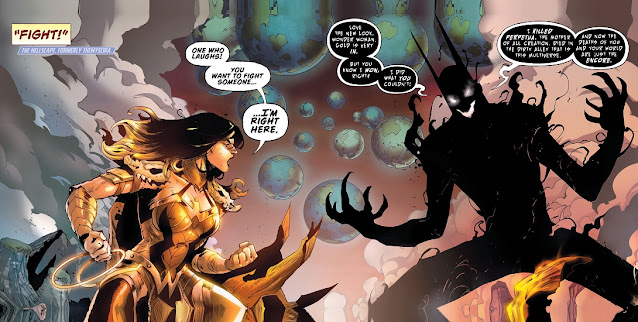 “Fight!”, “First & Last Men”, “The Batmen Who Laugh”, “Unstable Atoms”, “No More Superheroes”, “Falling Through The Cracks”, “Apicius”, “Armageddon Blues”, and “Reign Of The Swamp King” 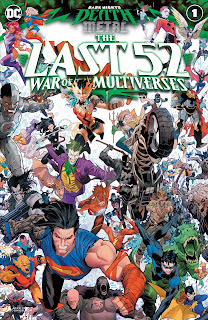 Dark Nights: Death Metal – The Last 52 – War Of The Multiverses ties in Death Metal #6, and next week’s finale. The End is Nigh!

This anthology, sadly, isn’t one of the strongest we’ve had. Don’t get me wrong, it’s not awful, and the stories are good, but what we have is clearly just an appetiser for the main course. (I’ve read Death Metal #7, and it’s a winner! Check out my review, which will go live a week from today).

The stories collected in this anthology show us the horrors of war, and the power of hope. They’re pretty well written, as a whole, but there’s really nothing here that’s essential to the ongoing plot. I guess that this can also be said of all the Death Metal one-shots, but some of them – like the exceptional Secret Origin – give us new takes on classic characters, looking into their hearts, their souls, and their histories, revitalising and invigorating them. 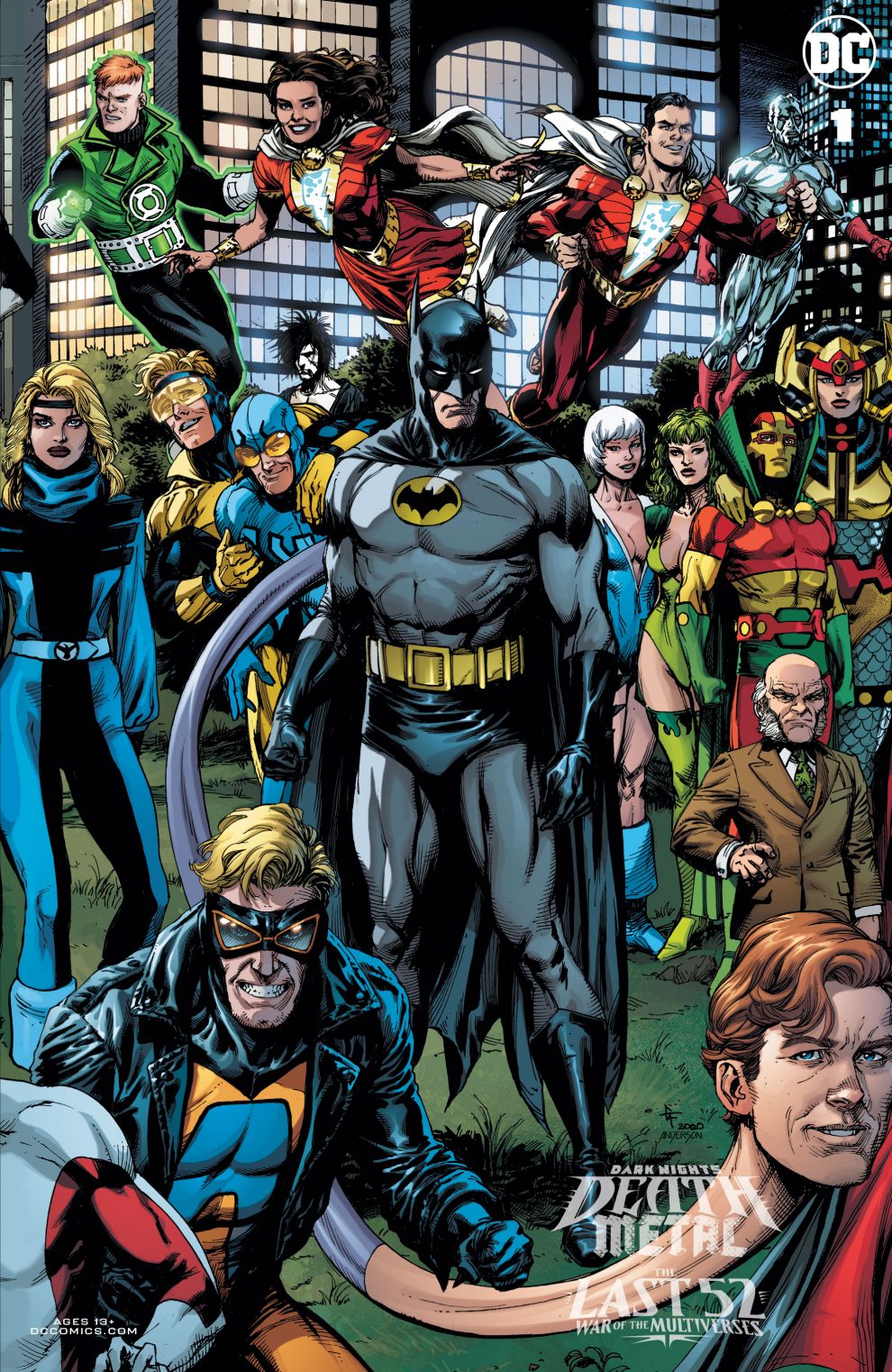 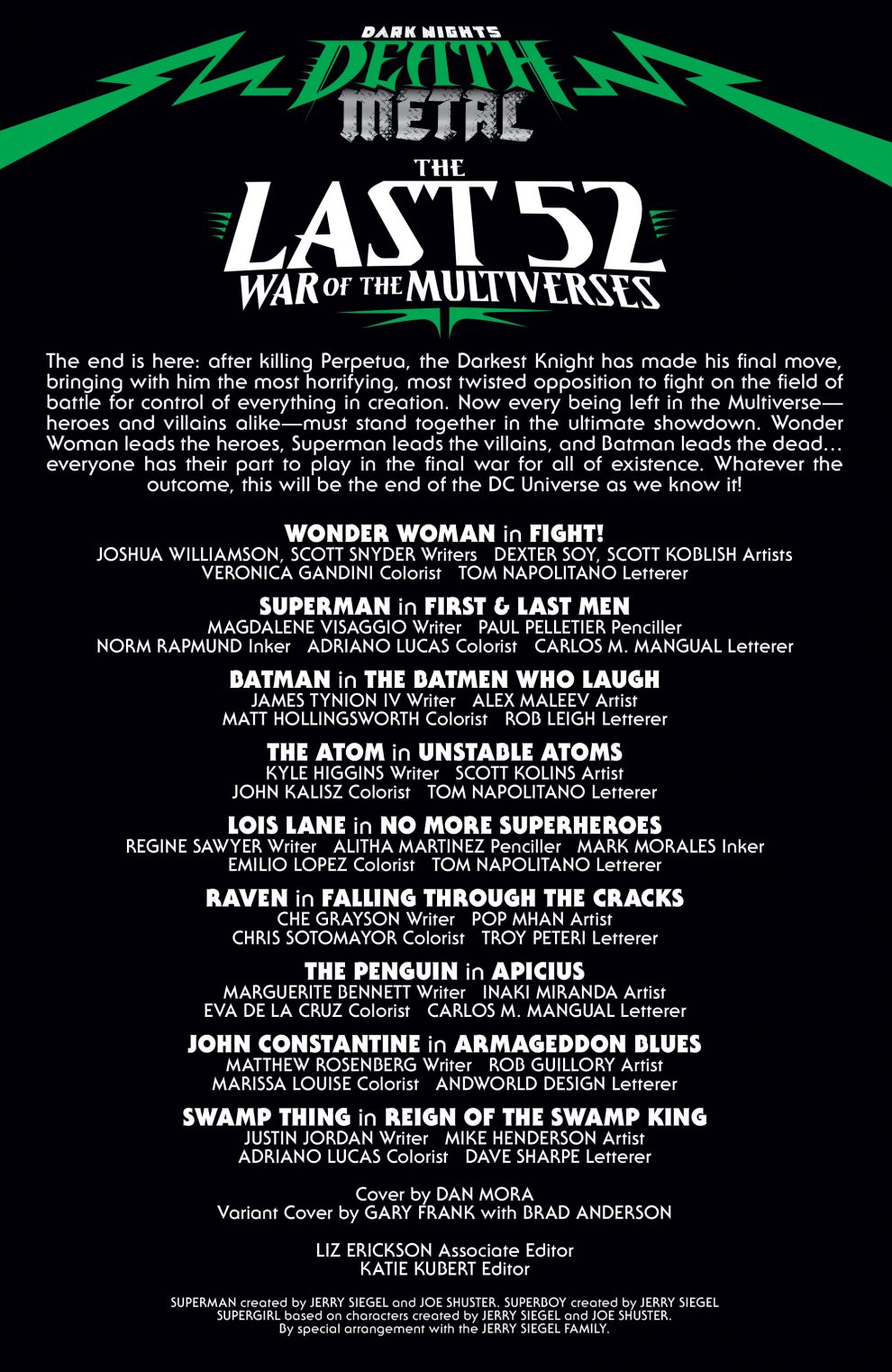 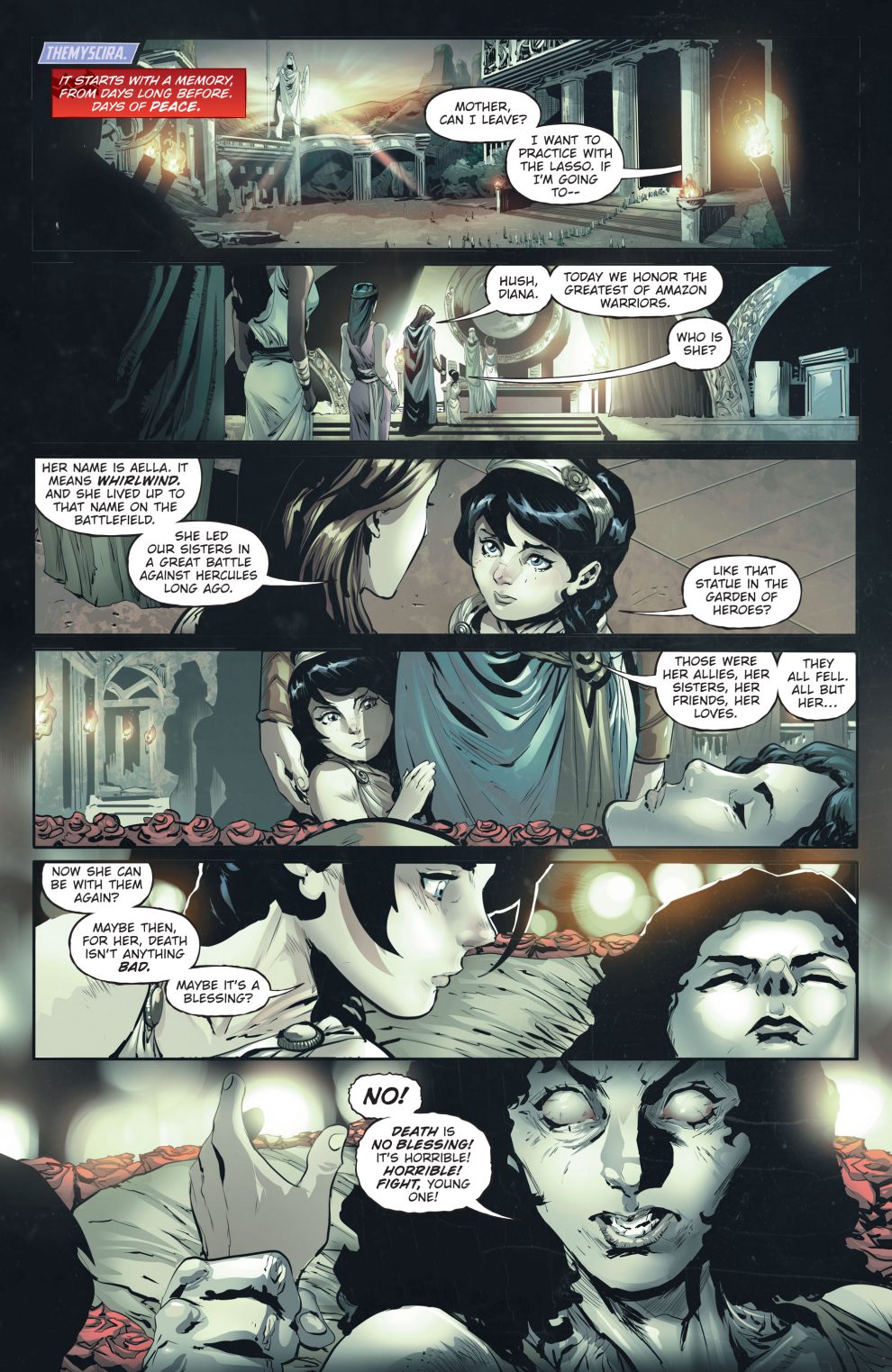 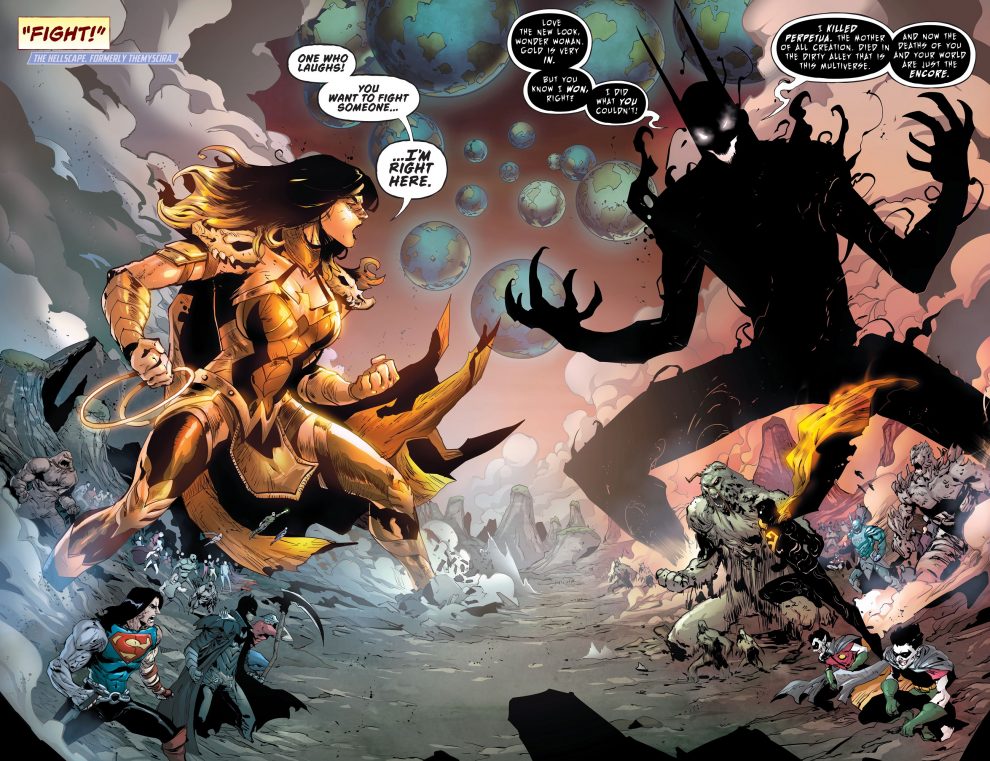 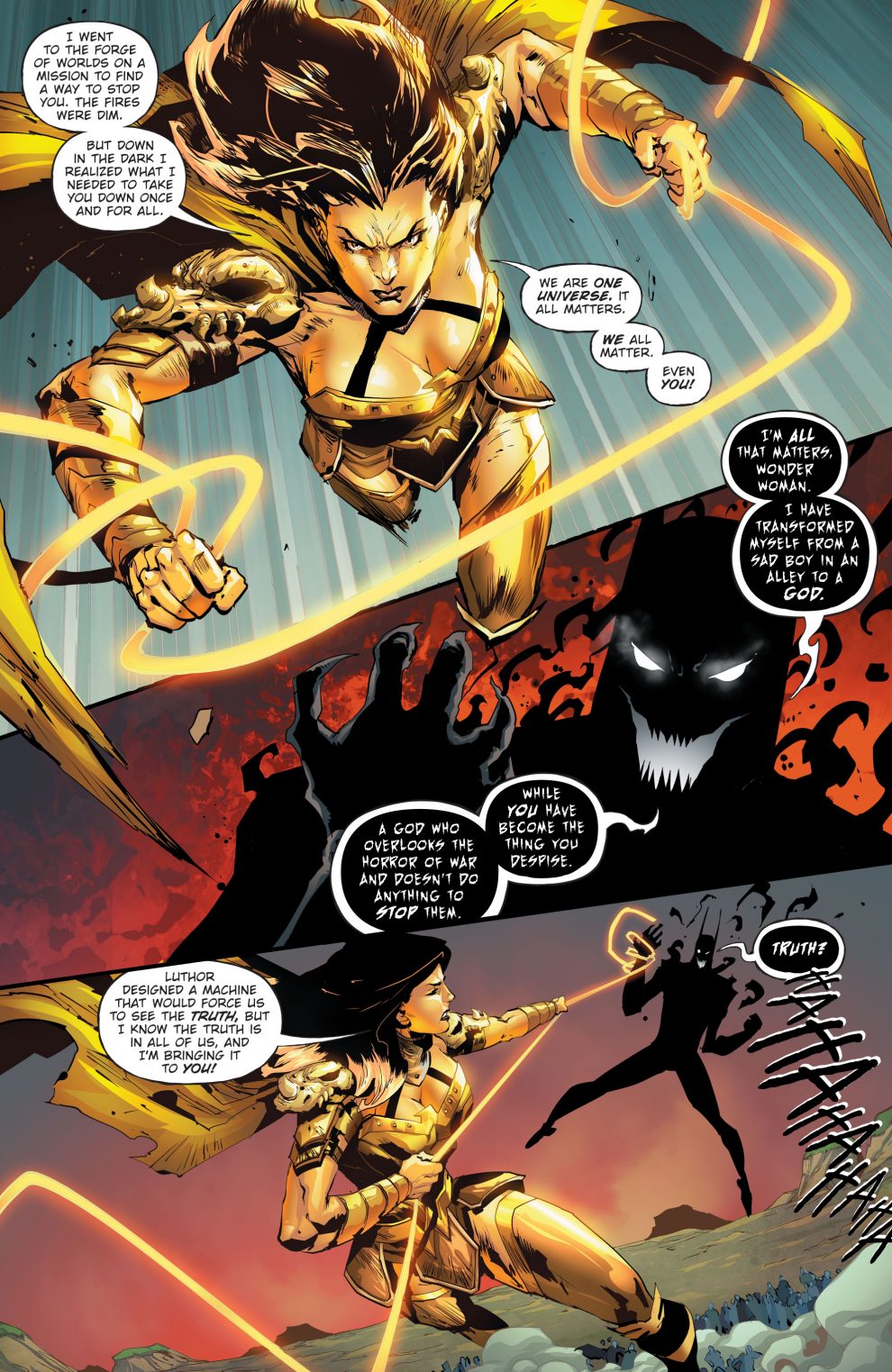 Eye Of The Beholder

What I will say about this issue is that it’s a visual feast! All the art and color in Dark Nights: Death Metal – The Last 52 – War Of The Multiverses is first rate, particularly the framing story at the beginning and end of the volume. Sadly the digital preview copy DC sent us had its pages in completely the wrong order, so didn’t make as much sense as the print, or release version probably will.

The sight of Wonder Woman appearing at the end of Death Metal #6 was awesome, and inspiring. The way she acts, and battles the Darkest Knight – The @$$h@+ formerly known as The Batman Who Laughs – is every bit as kickass.

While the stories in this book are well told, and very well drawn, colored, and lettered, it really all feels like filler. The main plot isn’t advanced any more from where Metal #6 ended. The Last 52 begins with Wonder Woman, all gold and gusto, facing down The Darkest Knight. After some nice, short, but sweet mini tales, the book ends with Wonder Woman facing down The Darkest Knight. Like I said at the opening to this review, what we have is clearly just an appetiser for the main course… but enough with all these canapes, gimme the steak, already!