Review: Spider-Man: Curse Of The Man-Thing 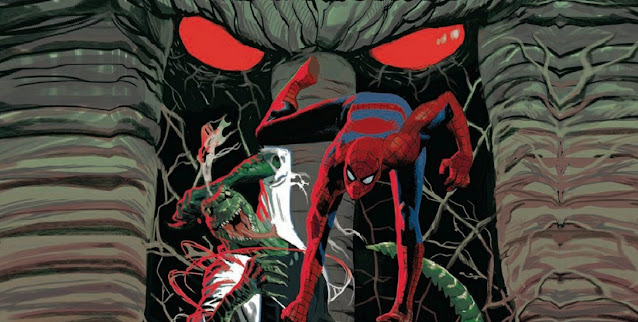 "Spider-Man: Curse Of The Man-Thing" 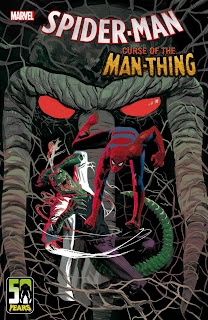 Welcome, True-Believers, to the second chapter of Marvel Comics' 50th anniversary celebration of the creature known as Man-Thing.

In part one - Avengers: Curse Of The Man-Thing - Harrower rebelled against the group of eco-extremists known as Hordeculture, and all but destroyed the Man-Thing. She tore it apart, and harvested its abilities, in order to wipe out humanity.

While Earth’s mightiest heroes, the Avengers, battled towering growths, magically spawned from the stolen Swamp God’s living plant-tissue, Captain America entered the creature’s mindscape, where here he came face-to-face with Doctor Ted Sallis, the scientist whose genius created the Man-Thing, and was absorbed into it... the man trapped inside the monster. 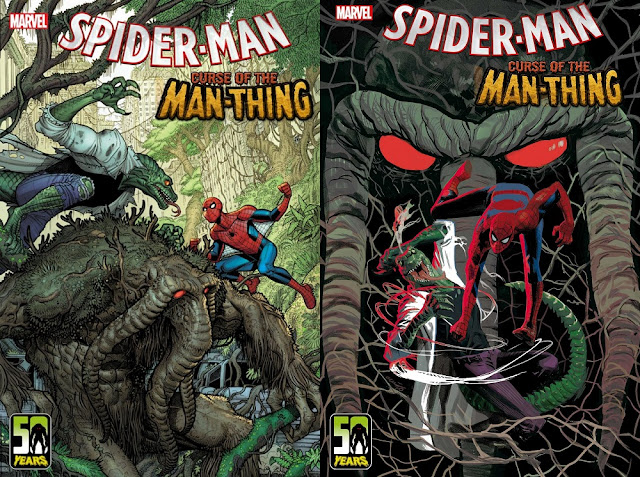 Years ago, Sallis used the S0-2 formula on himself, forever transforming him, but the twist was when Sallis revealed to Cap that he wasn’t actually the one responsible for creating the serum! This news meant that the Avengers may have lost their best chance of halting Harrower’s assault.

In New York City, a certain friendly neighborhood Spider-Man, and his wondrous webbed brethren, could be the last super heroes standing between Harrower and the end of the human race. Now, in Spider-Man: Curse Of The Man-Thing, the story continues. 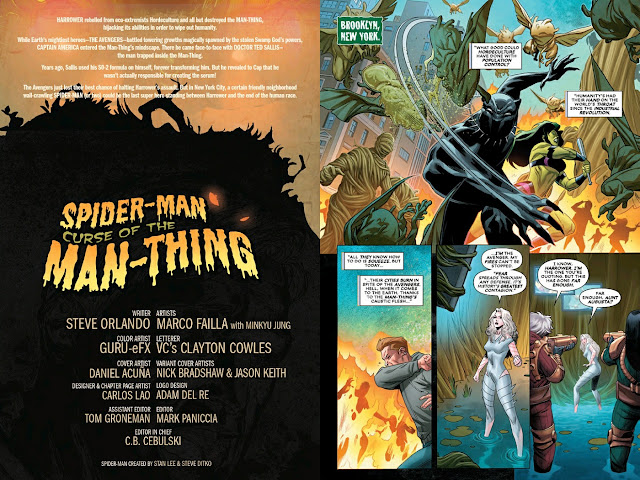 Man... Things Are Heating Up!

Steve Orlando's fanning the flames of intrigue, and action. The monsters created from Man-Thing's flesh share is powers to burn all of those that feel fear; whether they be superheroes, or innocent bystanders. These flames don't differentiate between good or bad, innocent or guilty.

We've already seen Captain America, the Sentinel of Liberty, try to get Sallis to regain control of the creature, but to no avail. Now it's the turn of another hero... a certain web-slinger you may be familiar with.

Once again, I love the way that Orlando doesn't just focus on the heroes as crime-fighters, but what makes them such to begin with. His Cap is an inspiration, and a legend, and his Peter Parker is a man with a past, and as someone who's made a career out of battling adversity, frequently turning tragedy to triumph. It's this aspect of Peter Parker that's the focus in this issue, and not the friendly neighborhood, wise cracking, superhero. Steve Orlando focuses on the man behind the super-man, and I love it.

Then throw in previously unknown ties between Ted Sallis, and another scientist from Spidey's past, and the web of intrigue continues to spread, and grow. 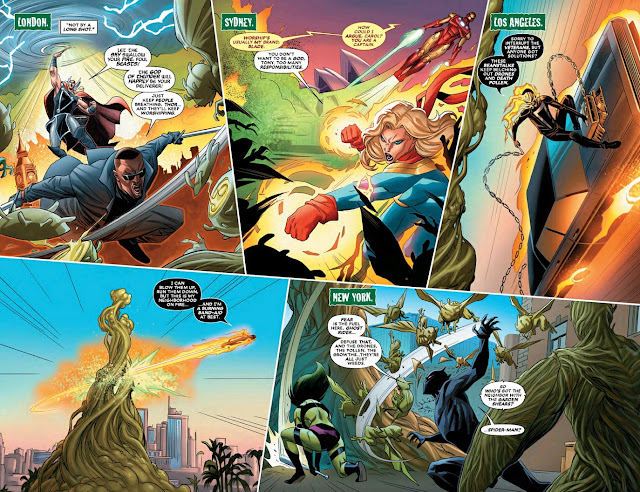 This issue's drawn by Marco Failla, assisted by Minkyu Jung. The art in this chapter's more cartoony than in the Avengers installment, but that's not a bad thing. The action comes thick and fast, but Failla and Jung handle the quiet moments in Man-Thing's mind, as he converses with Spidey, as well as all the fire and furor, with equal aplomb. Once again, we have a comic that's drawn by artists who can tell all kinds of stories, whether they're blistering battle set-pieces or just quiet conversations.

Guru e-FX is killing it with the color art. Having him here will make the transition between art teams a lot less jarring when the story's inevitably collected in a single volume. This will look like one cohesive tale, largely thanks to his style and talent. I would've preferred to have all three chapters of this epic handled by one art team, but Guru's colors help make the transition far less jarring than it would've been if we'd also had a change of colorists between chapters, as well as line-artists. 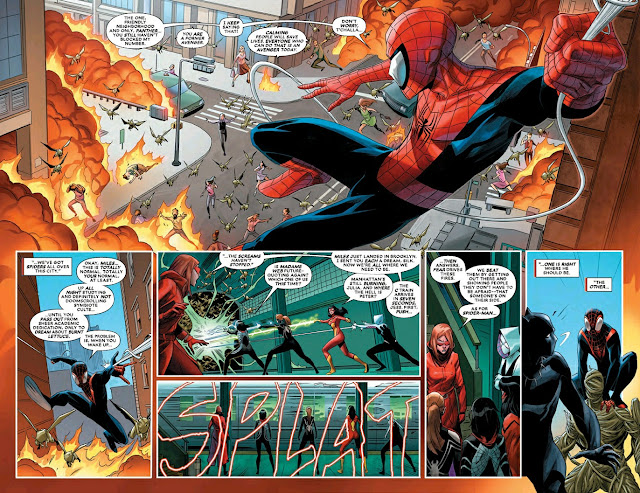 Fanning The Flames Of Hell

Woah... if you thought that Ted Sallis' little bombshell at the end of part one was a doozy, the denouement at the end of this issue will leave you reeling! How could Sallis have broken the code to the Super-Soldier formula that Professor Erskine took to the grave, where dozens of others had failed? Which dark powers did he make a pact with for the truth? The answers will shock, and surprise you!

Everything about this story screams celebration to me. Not just for Man-Thing's 50th anniversary, but for the entire Marvel universe. Steve Orlando is delving into the hearts and souls of his protagonists, while still delivering the operatic entertainment we all crave from our comics. The fact that he's doing it with some truly great creative teams handling the visuals, is the icing on the cake.

Letterer Clayton Cowles is a real talent. The way he's created totally different speech bubbles for Iron-Man and Ghost-Rider (because one's voice is filtered through his armor, and the other is a supernatural character) are simple, yet beautiful touches. Add to this his panel-filling sound effects, and what you get are words that are part of the artwork. SPLAT! CHOT. SPLOSH. SPLOT. ZORP. 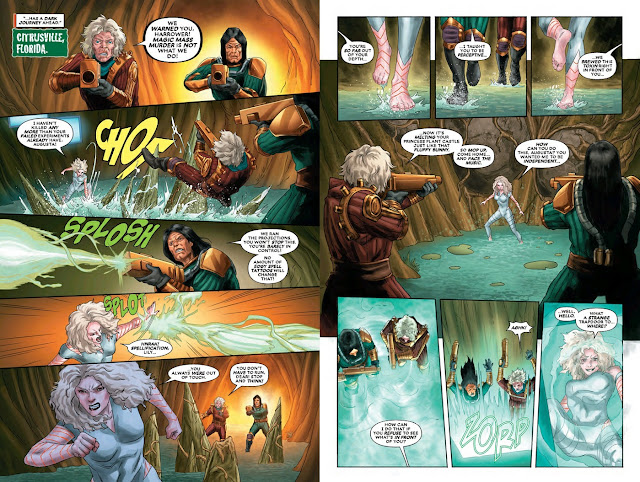 I'm really enjoying this series, as it ticks all the boxes. Sometimes crossovers feel like an attempt to cash in and make a fast buck. Get a lesser-known character, throw them in with the big-boys, give the books a couple of nice variant covers, and watch the fan-boys part with their dollars. This series does some of those things, but adds a brand new villain, drops in shocks and revelations, and also digs deep within the hearts and souls of the protagonists.

Yeah, I love a good superhero battle, but when the stakes are raised, and we see our heroes as people. that's when I really get into the story.

This series is alchemy, it's rich, deep, and powerful... it's a kind of Magik.

Look out for the final chapter, X-Men: Curse Of The Man-Thing, coming soon.