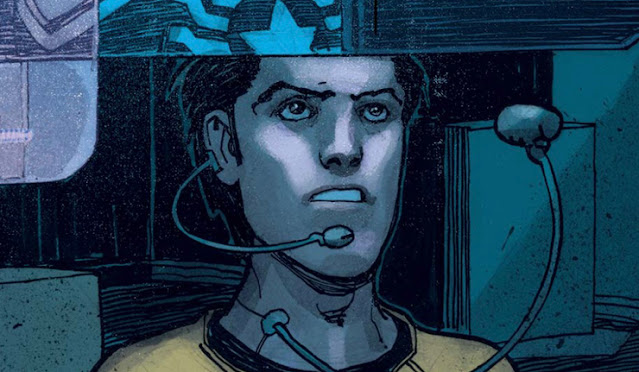 The next chapter of Vision introduces the last member of the Vision family who will be important to the plot: Victor Mancha.

Victor is not an original character, but has a long storied history in the excellent Runaways comic. Initially, Victor was created by Ultron- which makes him technically Vision's younger brother. In The Runaways, it turns out that Victor was supposed to be a sleeper agent who is supposed to gain the trust of the superhero community, join the Avengers, then betray them all in the far future. In said future, Victor's superhero name is Victorious is also the title of the chapter. 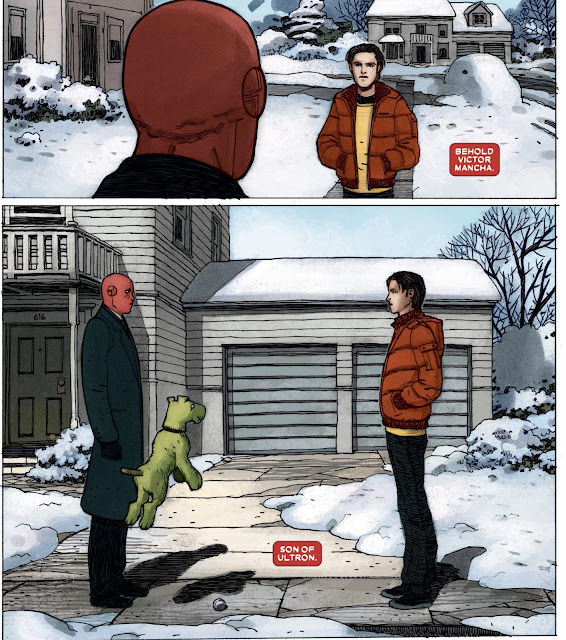 Much like most of Vision, names and events usually have a double meaning that  instills foreboding or a sense of dread. Since Victorious is the name of Victor's dark future where he betrays the Avengers, it casts an ironic, dark shadow over his time in the story and also foreshadows his motives later on.

But lets back up first. We the family doing various things as they go about their daily life. Viv is replaying the last time she saw CK before he was murdered. Vin is repeating the Shylock speech from Shakespeare's The Merchant of Venice. Virginia is trying to play the piano while singing Row Your Boat. Finally, Vision is on the phone with the Avengers while he casually uses his laser beams to melt snow off his sidewalk.

Every family member is going through their routines or scripts. However of all people, Virginia seems the most disconnected. She knows how to play the piano, but she does not know why. It's a meaningless task and she is beginning to become more aware of just how meaningless it is.

Before we can delve to deep into the family's current whereabouts, Victor greets Vision at the front door. Writer Tom King is swift to set up Victor's internal conflict. Despite defeating Ultron, Victor is forever haunted by the idea that he may one day betray the Avengers. This really informs a lot of Victor's character motivations throughout the series. But we will get there in a moment.

The Vision family go out to a restaurant to celebrate Victor's arrival. However, the family does an odd thing and order food, but specifically ask the wait staff not to prepare it, since they do not actually need to eat. This is yet another example of the Vision family doing empty routines or actions just to facsimile "normalcy". 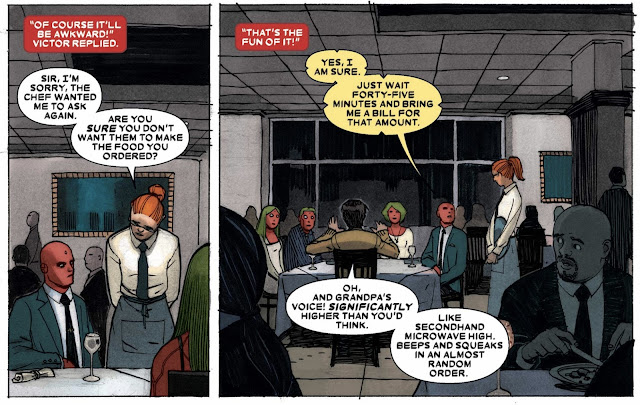 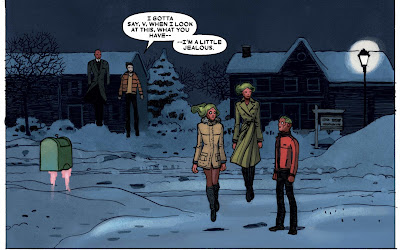 Victor and the Visions

Victor is an excellent foil for Vision and his family. Compared to the Visions, Victor is seen as the "normal one". He looks human, he acts age appropriate, and he's aggressively charismatic- traits that none of the Vision family possess.

This distinction is punctuated over several scenes where Victor bonds with each member of the family. He confesses to Virginia that he cannot play piano despite taking lessons. This gives Virginia an opportunity to confess how her perfect piano-playing abilities in some ways de-humanizes her. Virginia breaks down and starts repeating "I am. I am. I am" 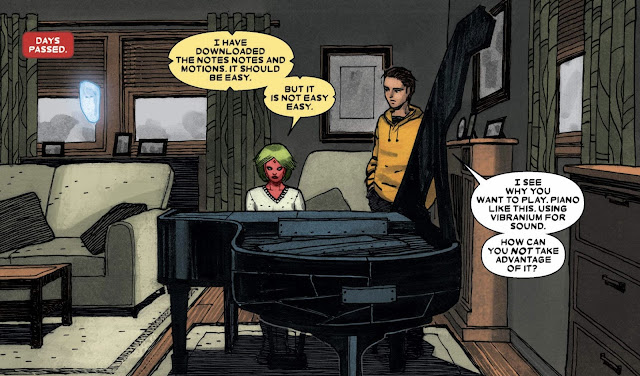 This repetition shows that Virginia is not human, but just a machine that plays back notes perfectly. It also emphasizes that she is struggling with her identity. She repeats "I am" but cannot follow it up with who she is. 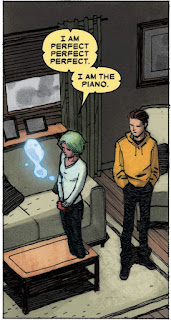 Also notice there are subtle cracks in the piano from when the Vision wrecked the house off-screen after learning that Virginia covered up the Grim Reaper's death. The piano symbolizes Virginia- a perfect receptacle of skills, but not considered human. Additionally the cracks are a physical representation of the mental cracks that Virginia is developing as she becomes more self-aware of her lack of humanity.

Another day, Victor is bonding with Vin. He confronts Vin's weird fixation on The Merchant of Venice, which shows Vin's obsession with death. Victor retorts how it's okay to love Shakespeare, but also have interests in other stuff. Victor shoots back if he never had any other interests beyond Shakespeare, he would never had met Vision or joined the Avengers. Once again, Victor's character motivation of wanting acceptance from the Avengers is on full-display here.

With Viv, Victor joins her to see CK's grave. However, Viv takes it a step further and actually uses her phasing powers to see into CK's casket and presumably his dead body. She regrets the action, but is glad that Victor is there to help her through it. Interestingly, despite such a morbid setting, writer Tom King titles this scene as "Days of Joy". Here with Victor's help, Viv is able to move past CK's death. It's a bitter-sweet moment here.

Later, Vision and Victor hang out at an art gallery, looking at the Look, Mickey! painting by Roy Lichtenstein. The painting itself is a commentary of the Visions and Victor's predicament.

In "Look Mickey", Lichtenstein confronts us with a scene in which the punch line comes at the expense of a popular icon—the ever-irascible Donald Duck. We come away with a feeling of ambiguity—not the simple joke we anticipated—as we identify with the narrator, Mickey, and the victim, Donald. The paradox is essential to pop art."

The Vision family and Victor are in a never ending paradox of trying to fit into humans. We as the viewers can see that it is a failed pursuit and we are feeling uneasy about their attempts to be "normal".

None of this is lost on Vision. He just plainly asks Victor, "Do you ever wonder, Victor? What does any of this mean?" while staring very plainly at the painting. Vision is not just asking about what the painting means, but life in general. 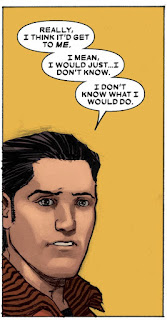 In case there is any ambiguity about the painting being a metaphor for Vision and Victor's plights, the art visually connects the two.

While Victor talks, the background drops off and mimics the same shade of yellow as in Look Mickey!, implying the characters in the painting are in a similar circumstance as Vision and Victor.

"I shall not be Victorious!"

Going back to the idea of Victor's entire character motivation is seeking approval from the Avengers, it eventually leads to what his ulterior motives are. Vin later on accidentally walks in on Victor communicating with the Avengers. Victor has been sent by them to spy on the Visions.

Victor freaks out that he's been discovered and begins to what looks like electrocuting Vin. Of course, this being written by Tom King, there is an added ominous layer. The scene is overlayed with a future narration that tells us in unequivocally and in great detail that Victor is going to die a horrible death before the end of this tale.

The inclusion of Victor in the story is a great addition. His is a continuity thread that should be exploited in any story about Vision he appears in. King does a great job taking the pre-established history and then molding it into this story, which adds even more personal tragedy and horror to it. Unfortunately, things are only going to get worse for Vision before they get better.
For the previous chapter's analysis, click here.
Avengers Eric Lee Fan Retrospectives gabriel hernandez walta Marvel Tom King Victor Mancha vision